2017 – a year of further bleaching and hope for recovery 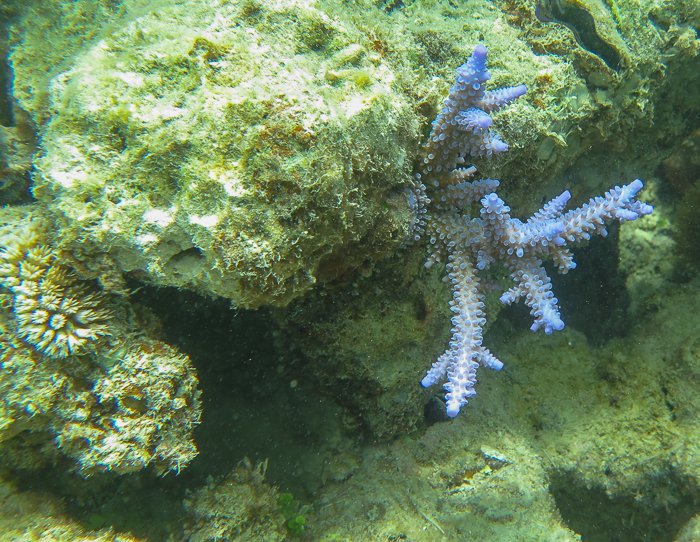 A tiny coral growing in the Clam Garden after the 2016 bleaching event.  Countless thousands of small corals like this are reappearing around Lizard Island.  If they get a chance to grow there will be a huge overall recovery of coral on the Reef over the next few years.  © Anne Hoggett

January 2017:  Greg Torda’s proposed research on ability of corals to adapt or acclimatise to higher sea temperatures was outlined in Coral recovery – basis for hope. Daniela Ceccareli and Zoe Richards were counting survivors.

February:  Archaeological studies at Lizard Island provide a baseline for sustainable fishing.  Expect other interesting archeology from the Lizard group in the years ahead.

Late summer: More coral bleaching, but less severe than in 2016. Its cumulative impact has been devastating for many coral species,  but some that are not dependant on symbiotic algae were not bleached.

May:  Anne Hoggett spoke at LIRRF events in Sydney and Melbourne, providing an update on the Reef and Lizard Island science.  Her son Alex Vail presented his research on fish collaboration.

June 30: Financial year-end.  Thanks to the continuing support of donors, LIRRF was able to increase its regular Fellowship funding by approximately $95,000 for FY18.  PwC have agreed to do the audit pro-bono. The FY17 financial report will be shared with Members when it has been completed (Feb 2018).

July:  We were surprised and delighted to receive a generous bequest from the Estate of Geraldine Haworth.  Geraldine’s late   husband Trevor was a LIRRF Trustee.  The Haworth family have been supporting science on the Reef for more than three decades.  Their company Captain Cook Cruises had a vessel that serviced Lizard Island in the Station’s early years.

August: Resident Research Station Directors Anne Hoggett and Lyle Vail were awarded the AMRI Medal at the Australian Museum’s Eureka Prizes event –  in recognition of their outstanding work managing the Station and communicating the plight of the Reef.

September: The time perspective on coral recovery;  coral growth after bleaching and the effects of water chemistry and sea temperature; the effects of habitat degradation; how top predators help juvenile fish and other YTD research projects.

October:  Coral time capsules – exploring growth and stress events in Porites corals at Lizard Island since around the time of Captain James Cook’s visit.  And another wonderful bequest – Zoli’s gifts of sight.

November:  The coral spawning was greatly reduced this year due to the loss of parent corals.   LIRRF Trustee Dr Penny Berents led an Australian Museum tour group to visit the Station and local reefs.  They saw the bleached corals, but also colourful species that were not bleached, thousands of tiny new corals that have grown through the winter months, and a lot of other marine life – including turtles, huge friendly potato cods, a moray eel, a clever octopus, reef sharks and countless other reef species.  There is still lots to see and study at Lizard Island.

December:  Optimistic climate links; our inaugural taxonomy Fellowship (see In praise of Taxonomy and Stylasterid corals);  how a 2012 Yulgilbar Fellow is helping human vision; and an impressive list of recent publications based on Lizard Island research,  including papers expanding knowledge of the Crown of Thorns Starfish and ability to control excessive populations.

Thanks in large part to a generous grant from The Ian Potter Foundation, LIRRF was also able to fund construction of an important improvement to the Station’s facilities in 2017 – the John Gough Cyclone Shelter.   It will enable staff and visiting scientists to stay during severe cyclones, rather than retreat to the mainland.  Their presence immediately after the cyclone passes will enable research projects to be maintained.

2018 research bookings at the Station remain strong.  This is excellent news, because the need for science on the Reef has never been greater or more urgent.  LIRRF continues to operate with very low overheads, providing a highly efficient support channel.

P.S. from Anne Hoggett: The photos below were taken at the Cod Hole on the outer reef near Lizard Island in mid-December 2017. The area was smashed by cyclones in 2014 and 2015, then bleaching in the late summers of 2016 and 2017 killed most of the corals that were left. There are now a huge number of tiny-to-small corals in the area. If they get a chance to grow up, we’ll see huge improvements in just a few short years. The trick is getting that chance. Hoping for a bleaching-free summer! 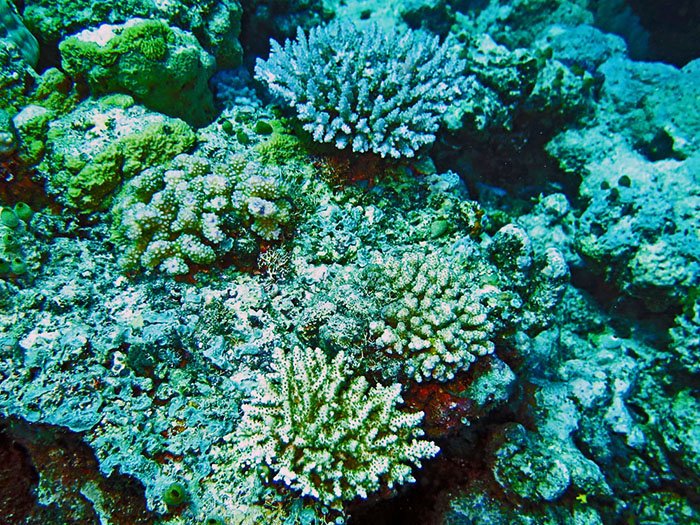 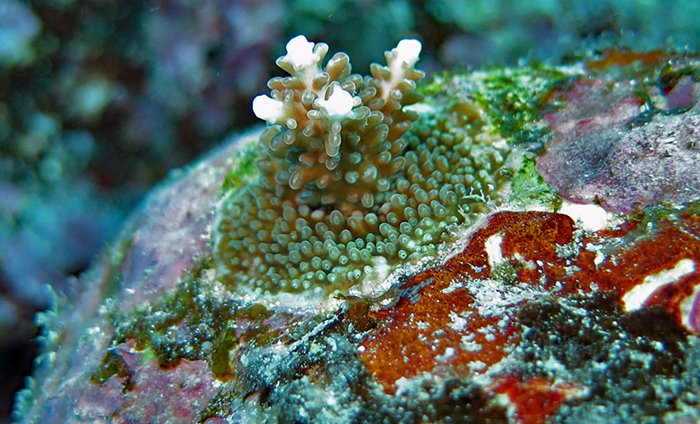 Another tiny new coral growing at the Cod Hole. The base of this one is about 5 cm diameter. © Anne Hoggett