Marine scientists at the Australian Museum’s Lizard Island Research Station do not study climate directly. However, they respect and accept the work of others who specialise in climate studies. The Museum’s Climate Change page provides education programs and other resources.

Many Lizard Island research projects examine the impact of cyclones and the surges in sea temperature that cause coral bleaching, and how life on the Reef will be affected by increasing CO2 emissions, ocean acidification and rising sea levels. Marine scientists know from their own observations that a sustained increase of just one or two degrees in sea surface temperatures (SST) above normal summer levels causes important reef-building corals to bleach and die.

The strong evidence-based consensus among climate scientists is that (a) global climate is changing: and (b) greenhouse gas emissions from human activity are the dominant cause.  This is accepted by leading Australian companies. For examples, see the position statements of AGL, BHP, CBA, RIO, Santos, Wespac & Woodside,

BHP’s Position Statement: “We accept the Intergovernmental Panel on Clim:ate Change (IPCC) assessment of climate change science that warming of the climate is unequivocal, the human influence is clear and physical impacts are unavoidable“.

State of the Climate 2018.   This clear, authoritative, easy-to-read joint report from the two leading Australian Government agencies responsible for monitoring climate was released in December 2018.  Based on extensive scientific observations and data, it provides an excellent starting point for understanding how and why our climate is changing.  PDF downloads are available at BoM & CSIRO.  See also The Conversation and this video:

The equivalent plots below are from the summer of 2018.  This was also a recovery year, in welcome contrast to the severe bleaching that occurred in the summers of 2017 and 2016: 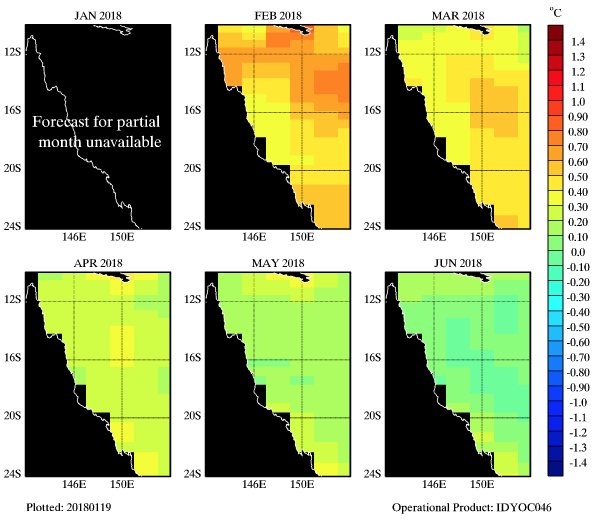 Unfortunately, the 30-year outlook is much more pessimistic.  The October 2018 IPCC Special Report on Global Warming of 1.5°C states it is likely to reach that level between 2030 and 2052 if warming continues to increase at its current rate. Chapter 3 states that when average global warming reaches 1.3°C above the pre-industrial period, tropical coral reefs will experience high risks of impact (e.g. very frequent mass mortalities).  And at 2°C, it says these coral dominated ecosystems will probably not exist.

The political reality is equally bleak.  Coordinated national actions required to reduce human emissions sufficiently to meet the 1.5° target are almost certainly NOT going to occur in time.  They would require economic and political coordination and disruption on a global scale unprecedented in human history. Changes away from fossil fuels provide opportunity for economic growth and commercial profit, but there is little political leadership in that direction. Major countries are disengaging from organisations that would facilitate global coordination.

IPCC SR1.5 indicates non-action on human emissions will also lead to unprecedented economic and political disruption. It will be a politically bumpy ride either way, with a wide spectrum of views as to how the costs should be borne. The solution is complicated by over-population and widening wealth-gaps within and between nations.

These realities make further research on the Reef even more urgent and important, as scientists look for ways of helping corals adapt to the higher temperatures, and as they continue to investigate the countless other species that will be affected by further loss of coral habitats.

Tim Gordon is a young UK scientist who has worked at the Lizard Island Research Station.  Click on the following link to watch his impressive presentation at the 2018 World Ocean Summit in Cancun, Mexico: Climate Change: Tales from the front line