A device inspired by Lizard Island research identifies susceptibility to age-related macular degeneration. It prompts actions to reduce the chance of blindness later in life. 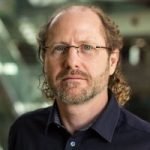 Dr Shelby Temple was awarded a 2012 Yulgilbar Fellowship to study polarised vision. His work at at the Lizard Island Research Station required apparatus that displayed pattens of polarised light. Although people are not normally able to see polarisation with their naked eyes, Dr Temple noticed he was able to see patterns produced by his apparatus. This ability was first described by Wilhelm Karl von Haidinger in 1844, and is known as “Haidinger’s brush”. Further research indicated it is a function of macular pigment density, which varies from person to person.

Dr Temple proceeded to develop a portable prototype device that has proved effective in assessing macular pigment density. He has co-founded Azul Optics to fund construction of a further 20 desk-top units for testing by opticians, with a view to full commercial production. On the basis of this work, he was named the BBSRC Innovator of the Year 2017.

Long term, Azul Optics plans to create a smaller device that people can have in their home, much like home blood pressure monitors. Vision is affected by diet and other factors, including smoking, drinking and fitness. The device will help people make better decisions about their lifestyle and general health.

The research undertaken by Dr Temple and his colleagues has been published in scientific papers, including Out of the blue (2014) and Dynamic polarisation vision in mantis shrimps (2016).

Mantis Shrimp Odontodactylus scyllarus © Roy Caldwell. Both this species and Gonodactylus smithii rotate their eyes to align particular photoreceptors relative to the angle of polarization, thereby maximizing the contrast between an object of interest and its background.  The dynamic polarisation paper provides the first documented example of any animal maximising polarisation information through rotational eye movements.

Such research illustrates how marine science advances in small, slow, careful steps; how it can lead to deeper understanding of human life; how curiosity, imagination and creativity led to a new application of a phenomenon of human sight first identified in 1844; and how the work of visiting scientists at the Lizard Island Research Station can produce a benefit for people everywhere.