Dom Roche is a postdoc at the University of Neuchatel in Switzerland and was the 2012 Ian Potter Doctoral Fellow. He and his wife, previous feature scientist Sandra Binning, have been conducting field work at the Australian Museum’s Lizard Island Research Station for 6 years.

Currently, Dom is working with Masters student Fausto Quattrini, investigating what’s known as ‘the oddity effect’ among coral reef fish. Reef fish often aggregate to form schools or shoals, and these groups can contain more than one species. Simply put, the oddity effect proposes that group members that stand out will be more heavily targeted by predators, which has been shown to occur in a number species.

Dom and the team he is part of in Switzerland are interested in the cognitive abilities of fish and are running experiments to test whether fish can use the oddity effect to their advantage. 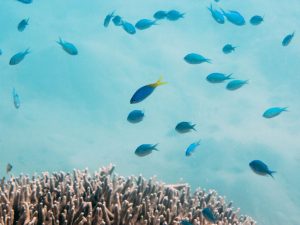 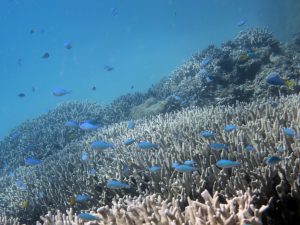 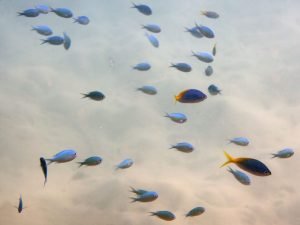 They are looking at the decisions made by coral reef fish and seeking to answer whether fish will join, reject or be ambivalent to a group with an existing ‘odd fish out’. Can fish recognise that a group has an odd fish present, which makes it a more obvious target to predators? If so, will fish choose to join a group with an oddity present or one where all members look alike?  To date relatively little research has been done in this area.  See however this 2003 paper on Overriding the oddity effect… (PDF). 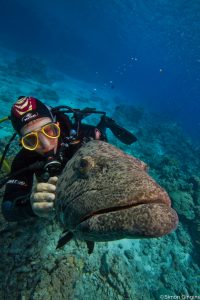 There are competing hypotheses for how fish will interact with groups containing an oddity. Fish might choose to join the group with an odd individual, on the premise that the oddity itself will be the target of predation instead of other group members. Alternatively, fish may avoid a group with an odd individual, as the oddity’s presence could make the entire group stand out as a target.

Dom and Fausto are testing these hypotheses in 3 different species which often form mixed schools, making them great subjects for this kind of experiment.