You are here: Home / Posts / Vinegar – controlling COTS at half the cost

COTS is a global issue

Massive population outbreaks of the coral-eating crown-of-thorns starfish (Acanthaster spp. referred to as COTS) destroy reef after reef as they spread.  The current outbreak on the Great Barrier Reef is the fourth recorded since the 1960’s.  COTS outbreaks also threaten coral reefs throughout the Indian and Pacific Oceans. The impact has been severe. 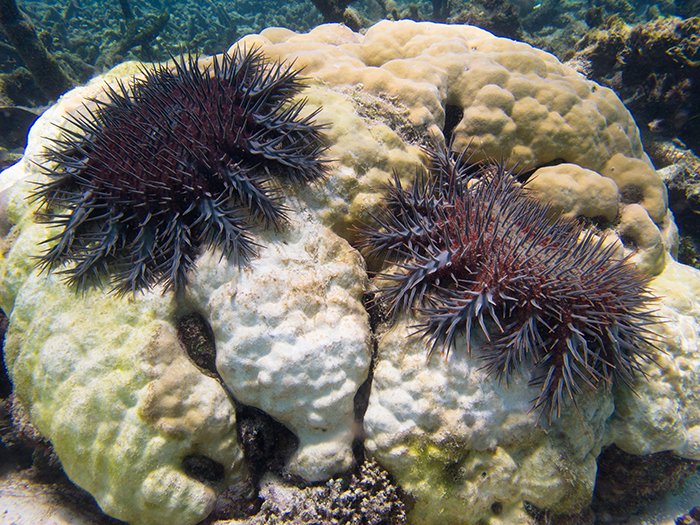 While the ideal solution is to stop the outbreaks altogether, this is easier said than done.  We still don’t know what causes such outbreaks to occur.  Without knowing the exact cause, it’s difficult to address the problem.  Also, COTS are a naturally-occurring, long-term (i.e. native) inhabitant of the Great Barrier Reef, so total extermination is not an option.  We need to ensure that population control does not interfere with natural ecosystem processes.

So far the only way of mitigating over-population of COTS is to isolate or remove them from the reefs.  Techniques include physically removing individuals for disposal on land, fencing around select sites and injection with chemicals.  There are hundreds of thousands, if not millions of COTS in active outbreak areas.  Manual methods are labour-intensive and therefore expensive.  In terms of economic feasibility, such techniques are best suited to saving reef areas of particular importance or value.

Currently the preferred removal technique involves injecting a dilute solution of bile salt, produced as a by-product in cattle abattoirs.  Developed by Dr. Jairo Rivera-Posada and Professor Morgan Pratchett, both of the ARC Centre of Excellence for Coral Reef Studies, James Cook University, bile salt injections can be administered underwater using agricultural injection guns.  A long needle separates the diver from poisonous COTS spines, limiting the risk of stings.  COTS typically die within 24 hours of a single bile salt injection.  This method has drastically increased the efficiency of chemical control.  It has enabled the Association of Marine Park Tourism Operators (AMPTO) to remove more than 300,000 COTS from the Great Barrier Reef Marine Park so far this year. 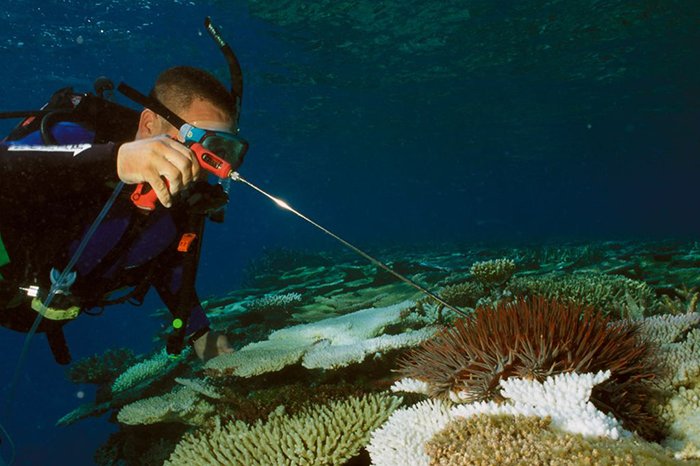 Injecting COTS one by one – photo credit Daily Mirror UK

Working in remote parts of Papua New Guinea, I see first-hand how a COTS outbreak could severely affect local communities. I conduct my research on the pristine reefs around Kimbe Bay.  My boat drivers come from a remote island where subsistence fishing is a major source of protein.  They asked me how they could protect their reefs from the spiny creatures that are devouring the corals.  The bile salt injection method is not feasible in such remote communities, where oxbile is difficult to access and prohibitively expensive.  It also requires expertise in handling, dilution and mixing.  This spurred me to investigate vinegar as an alternative solution.

Vinegar, a cheap and widely available household product, had been tested in Japan with low success rates. In my pilot study I modified the methods slightly.  I found that PNG starfish are much more susceptible to vinegar than their Japanese counterparts. This prompted me to expand the study to COTS on the Great Barrier Reef.

My current project at the Australian Museum’s Lizard Island Research Station aims to develop and optimise vinegar injections as a viable alternative to bile salts.  Initial results indicate that a single 25ml injection of vinegar will induce functional mortality in COTS within 24 hours and 100% mortality within 48 hours, at half the cost of the oxbile method.  Further details are available in my published research paper and in my Field Trip Report (PDF download). 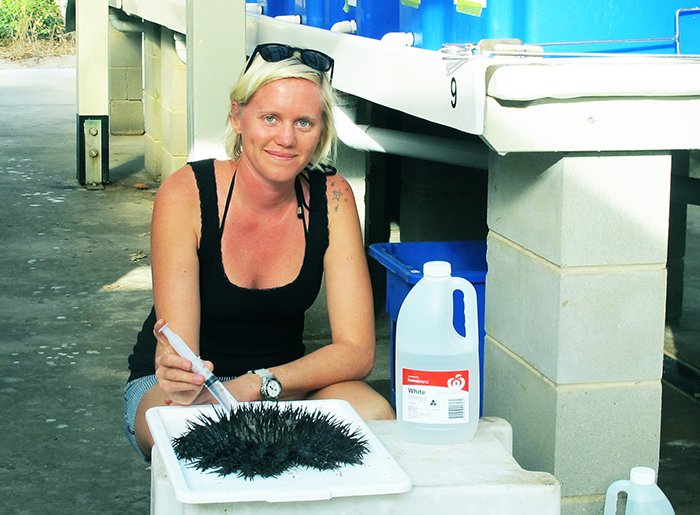 In April 2017, after extensive tests to ensure safety for other species, the Great Barrier Reef Marine Park Authority approved the use of household vinegar as a more cost-effective method of controlling outbreaks of the Crown of Thorns Starfish. See Press Release.