Marine geologists are investigating the effects of changing sea levels and sea surface temperatures on reef development, with some surprising results.  This graph shows the eustatic (global) sea level for the last 360,000 years.  1kya = 1,000 years ago. 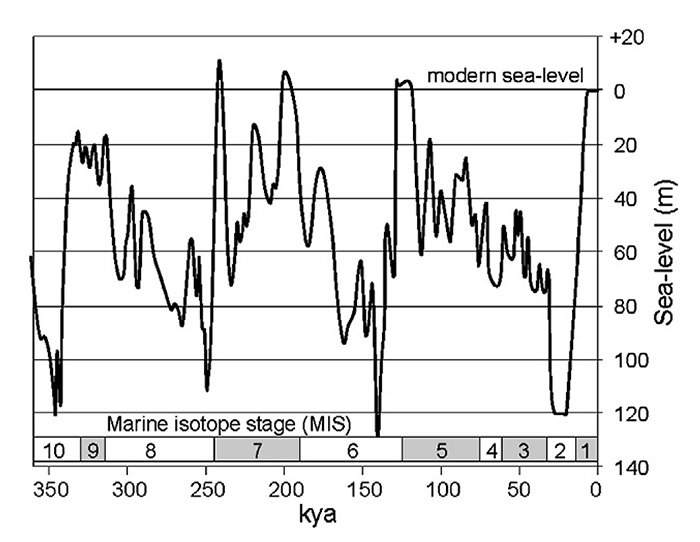 Around 126,000 years ago (Late Pleistocene period), the sea level was slightly higher than it is today.  Over the next 100,000 years it oscillated up and down.  Each oscillation cycle took thousands of years – rapid in terms of geological time, but slow in terms of human life-spans.  The down movements were generally greater than the ups until around 20,000 years ago, at the end of the last glacial maximum, the level was about 120 meters below where it is today.  In that period a significantly greater proportion of the earth’s water was bound up in vast sheets of ice.  New Guinea and Tasmania were connected to continental Australia by land…as was the hill that is now Lizard Island.  Most of the area that is now the Great Barrier Reef lagoon was a coastal plain.  See GBRMPA > general reference map (1.5MB).   The coast was located approximately along the line of what is now the outer reef, at the edge of the continental shelf.  There were coral reefs there, formed in part by species still found on the GBR today.

Then the climate changed.  The ice began to melt, causing the sea to rise. The old coastal plain became a huge shallow lagoon protected by outer (barrier) reefs, ideal for the growth of new coral and other marine life forms that depend on sunlight and photosynthesis.  Further south, the same rising sea also flooded the Parramatta River valley, creating Sydney’s magnificent harbour.  However, the rise in sea level was generally detrimental to the old coral reefs along the continental edge and slope, which received progressively less sunlight as the depth increased. The sea stabilized at approximately its current levels around 8,000 years ago.

Jody Webster is an Associate Professor in the Geocoastal Research Group at the University of Sydney.  He has used the facilities of the Lizard Island Research Station to study carbonate-siliciclastic sediment interactions.  He has also been working with other scientists to study how changes in the sea level affected the Pleistocene reefs along the continental shelf edge and slopes.  Their 2011 paper concluded that (1) repeated slow amplitude sea level rises are favourable to reef development, providing space for vertical accretion; (2) low amplitude sea level falls are less detrimental than high-amplitude falls in terms of habitat compression; and (3) high amplitude sea level rises can cause reefs to ‘drown’.

This is a 3D representation showing the depth of reefs found on the continental slope at the entrance of Hydrographers Passage.  The red posts show the location of the IODP Expedition 325 drill cores.

The gallery on drowned reefs at deepreef.org has other informative images.

The reefs found outside the GBR lagoon on the ocean side of the barrier reefs are mesophotic (deep-water, light-dependent).  A 2013 paper reports that in the 3,000-year period commencing 13,000 years ago and ending 10,000 years ago, coral continued to grow notwithstanding a 30m rise in sea-level and high sediment flux.  However, as the depth increased beyond 60m and sedimentation continued, the mesophotic  reefs became less tolerant and more vulnerable. Eventually they died. This was followed by a 2,000 year hiatus in coral growth, during which sediment flux increased and non-coral encrusting species dominated. Then, around 8,000 years ago, the sea level stabilised, the water became clearer and mesophotic corals began to re-populate to depths of 100m.

Papers published in 2014 (here and here) indicate a remarkable resilience of coral over geological time.  It has survived and recovered from extreme environmental variations since the last glacial maximum, including significant changes in sea surface temperature.  However, scientists have also found that present-day increases in sea temperature are contributing to coral bleaching and the death of vast areas of coral.  See GBRMPA and AIMS.  Adaptation and recovery can take a very long time.  Our challenge now is to ensure that our human activities do not further exacerbate conditions that could bring about another 2,000 year hiatus in coral growth.