This is a story of a unique data set quantifying the relationship between the loss of adult corals and new coral recruitment. It is reported in Terry P Hughes et al Global warming impairs stock-recruitment dynamics of corals.

Recruitment occurs when tiny coral larvae transition from their open-water zooplankton stage and settle. Once settled, they form coral colonies by cloning themselves.

The data shows reduction of adult corals caused by bleaching events results in less larvae and lower recruitment.  This research is unusually valuable, not because it confirms dead corals don’t make babies, but because it quantifies the extent of larval recruitment decline, based on a unique data set derived from decades of study along the 2,300-km  length of the Great Barrier Reef. 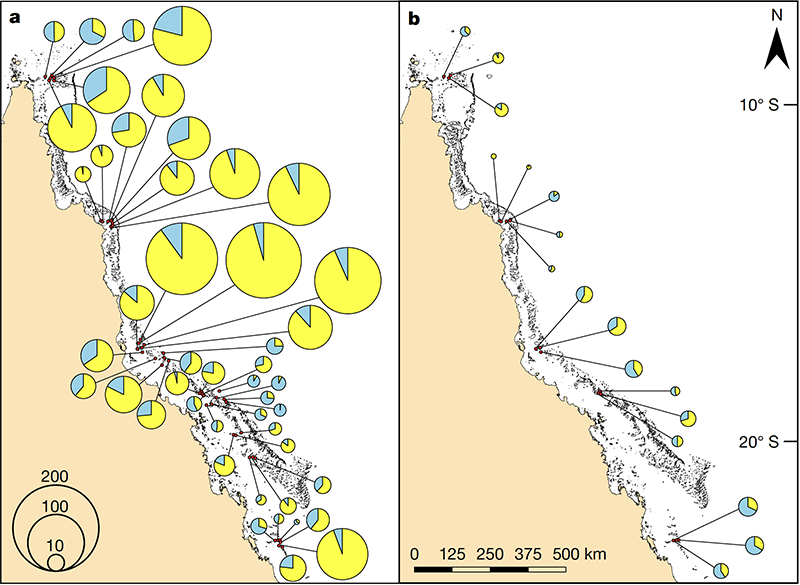 The collapse of coral recruitment along the 2,300-km length of the Great Barrier Reef. a: Density of recruits (mean per recruitment panel on each reef), measured over three decades, from 1996 to 2016 (n = 47 reefs, 1,784 panels). b: 2018 density of recruits after mass mortality of corals in 2016 and 2017 due to back-to-back bleaching events (n = 17 reefs, 977 panels).  The area of each circle is scaled to the overall recruit density of spawners and brooders combined. Yellow and blue indicate the proportion of spawners and brooders, respectively. The map template is provided by Geoscience Australia under a licence from Creative Commons Attribution 4.0 International Licence. © Terry P Hughes et al.

The Lizard Island Research Station’s ability to support such longitudinal (multi-period) study is one of the advantages of its fixed island base. The following graph shows Lizard Island data. Note the vertical axis is a log scale, so the difference before and after the bleaching events is much bigger than it looks. Each recruitment panel was an unglazed 11 cm x 11cm unglazed clay tile. 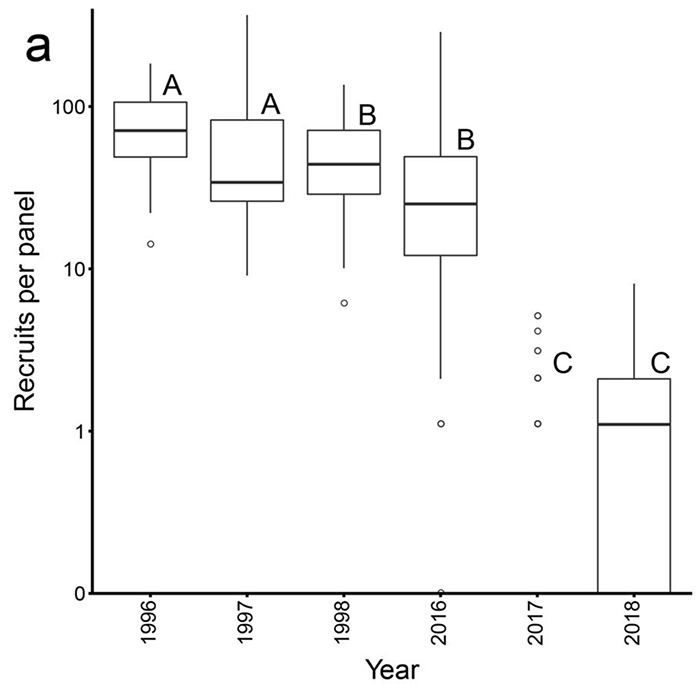 Recruitment of corals over time on Lizard Island Reef. Box plots show recruit density per settlement panel (n = 30, 55, 44, 125, 126 and 118 panels in 1996, 1997, 1998, 2016, 2017 and 2018, respectively) before and after mass mortality of established corals in March 2016 (after the retrieval of settlement panels in January 2016). Most values for 2017 are zero, causing the box plots to collapse. The shared lettering (A–C) indicates recruit densities in each year that are statistically indistinguishable. Horizontal lines show the median, boxes indicate the middle two quartiles, vertical lines indicate the first and fourth quartiles, and data points are outliers. © Terry P Hughes et al

The paper reports that overall, along the entire GBR, recruitment of corals after the 2017 and 2018 bleaching events was only 11.3% of average levels measured over the previous decades – i.e. a reduction of almost 89%.

It also reports variances between coral species, particularly between those that spawn (i.e. those that release their eggs and sperm into the water for fertilisation to occur externally) and those that brood (i.e. fertilise internally and release well-developed larvae).  Recruitment of spawning corals was reduced to only 6.9% of the historical average. Brooders fared better at 36.5%. This distinction is significant because most (90%) of reef-building corals are spawners.  In other words, coral loss from bleaching changes the mix of coral species in a way that is undesirable from a reef-building and reef-sustaining perspective.

The research team found no evidence that planktonic coral larvae migrate northwards from unbleached southern reefs. This was no surprise – their larval stage is too short and the prevailing current flows from north to south.  Even if they could disperse northwards in demographically meaningful numbers, genotypes from the cooler latitudes would probably be maladapted to the warmer northern temperatures.  This implies coral loss caused by bleaching on any given reef is likely to be more significant than the same percentage loss caused by a direct-hit cyclone. Because the path of a cyclone is relatively narrow,  the affected reefs are repopulated by coral larvae from less-disturbed reefs nearby.

Media coverage of this study has been misleading. For example, the Sydney Morning Herald ran it under the headline ‘Shocking’ coral spawning drop raises doubts over Great Barrier Reef’s resilience.  Indirectly it does, but it is just the obvious consequence of coral loss from bleaching and not new news.  A more accurate but less sensational headline could have focused on the unique data set or this quote from Terry Hughes: “We are not saying (the Reef) won’t recover again. It will recover more slowly, and more likely to something else”.

The paper concludes that the probability of avoiding further bleaching events on the GBR in the next decade or two is vanishingly small, and that 70-90% of the world’s coral reefs could disappear as soon as 2030 unless decisive action is taken to reduce greenhouse gas emissions.

The paper was submitted for publication in August 2018.  It did not take account of the November 2018 spawning .  We sadly acknowledge the bleak outlook based on climate science and unlikelihood of sufficient global reduction in greenhouse gas emission, but for now there is lots of recovery happening and a still a vast amount of wonderful marine life to see and study at Lizard Island and elsewhere on the Reef.

Dr Andy Lewis has been researching and guiding at Lizard Island for decades, and has contributed many images to the Lizard Island Field Guide.  He sent us this YouTube slideshow on 9 December 2018: