In 2018 the corals spawned; juvenile corals that settled back after mass bleaching of 2016 and 2017 continued to grow; and many more appeared.  Fish populations increased.

“We smelled it first, then went and checked and there was quite a bit of spawn in the water. We had planned to go out tonight (and still will) but it looks like they went a bit early this year. This is the first time that we’ve smelled coral spawn since 2015. That’s a very positive sign that there are more corals now that are big enough to spawn. Fingers crossed for another disaster–free summer!”

And the next morning:

“Almost 20 of us went snorkelling at Loomis (Reef) last night and were very happy to see quite a lot of spawn in the water – several sizes and colours which indicates a range of coral groups. Very hopeful indeed”.

She also sent us these two wonderful photos: 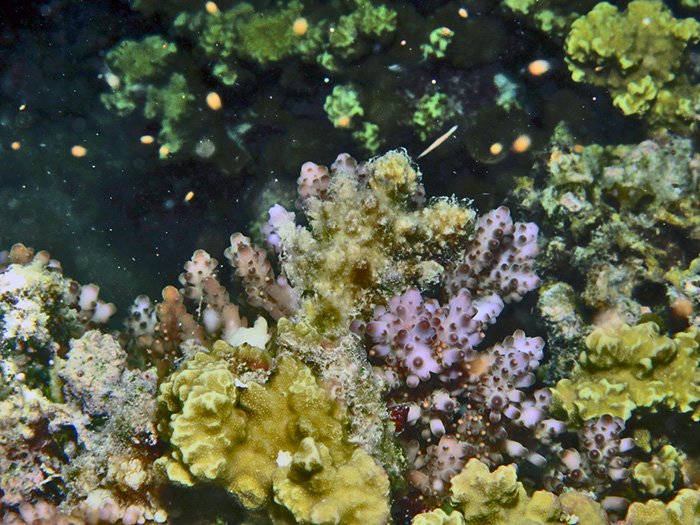 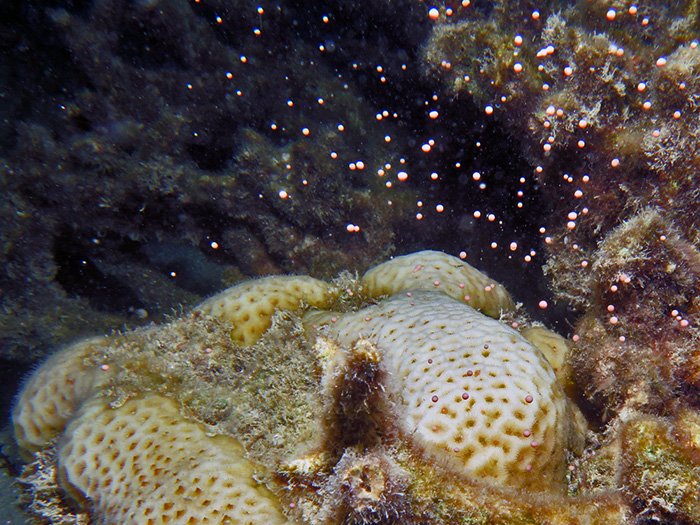 Dr Andy Lewis has been researching and guiding at Lizard Island for decades, and has contributed many images to the Lizard Island Field Guide.  He sent us this note and YouTube slideshow on 9 December:

However the recovery is now gaining momentum and thousands of juvenile corals have settled on the bare reef and begun to grow (yes every one of those red arrows in the last two images is a small coral). No intervention required!

Evidently, the inherent recovery capability of the Great Barrier Reef remains intact, even here at Lizard Island which was the epicenter of the cyclone and bleaching damage. Where are these coral recruits coming from, and are they from thermally tolerant parents? Compelling questions, and they require fundamental marine science to deliver answers.  Hopefully the recent coral spawning adds another new cohort of juveniles in the next week or so, and nature gives this reef a few years breathing space to come back.

And fish populations are increasing.  This video clip was recorded by scientists Daniela Pica and Penny Berents near Lizard Island in November 2018.  The two divers are Penny (who is also a LIRRF Trustee) and Peter Berents, and the fish are Giant Trevally Caranx ignobilis.  Penny writes: We were completing our safety stop at the end of a dive on Day Reef when a huge school of Giant Trevally swam towards us along the edge of the reef, circled us and then swam away. We had been collecting Stylasterid corals (lace corals) on the outer face of the reef. What a magic sight as these majestic fish surrounded us and then swam away into deep water.

The Australian Bureau of Meteorology forecast indicates 2019 will also be a bleaching-free year. The US NOAA forecast is less optimistic, indicating a reasonable chance (40-50%) of bleaching conditions. (See Climate Links).  We can only hope the BoM forecast proves to be true, and that there is not another direct hit on Lizard Island from a category 4 cyclone.