The Sapphire Project and The Great Barrier Reef

This day is all about raising awareness for our oceans; the perils they current face due to human impact and the benefits we as human derive from these natural wonders. 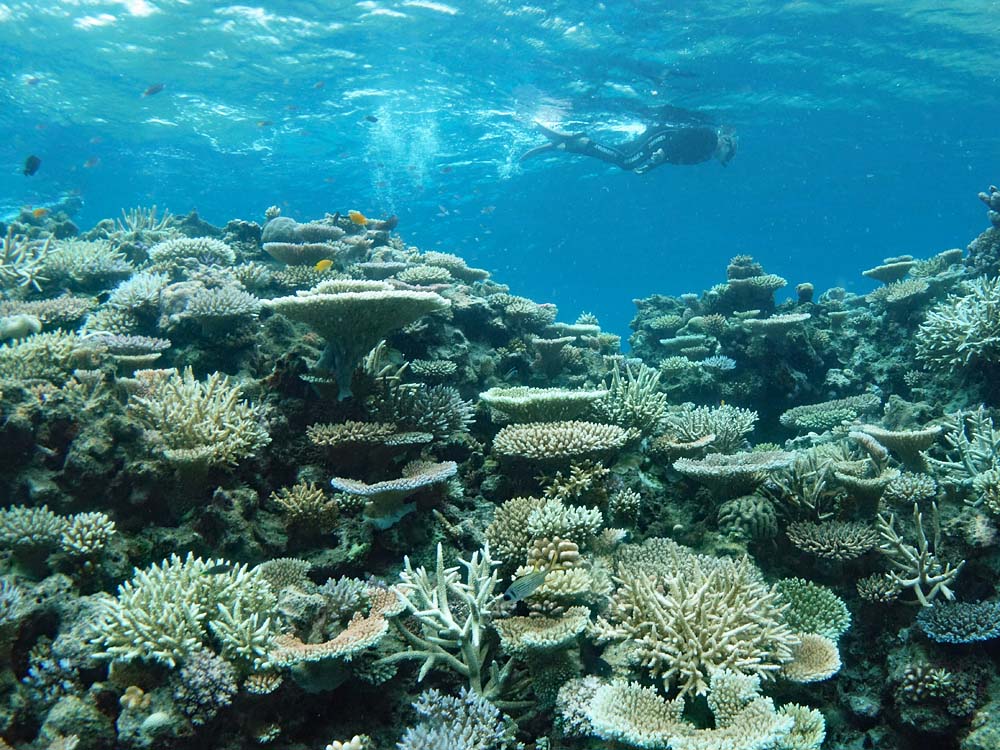 But this World Oceans Day is a little different from the others, as it also marks the birth of The Sapphire Project – a group with a mission to educate and inspire Australians on environmental issues. And right now, The Sapphire Project is spotlighting the Great Barrier Reef, one of Australia and the world’s most valuable natural eco-systems.

By now, it’s hard to miss the fact that the Reef is under threat. This is news to no one. But there are a few things in particular that you may not know about our precious Reef. Like, did you know there is a more insidious threat than coral bleaching? Or that Reef restoration is not scalable?

We spoke with Dr Anne Hoggett, head of  the Australian Museum’s Lizard Island Research Station to find out more about The Sapphire Project and The Great Barrier Reef – and it was a unique experience. There’s much more to conservation and the future of our Reef than just halting coral bleaching. Below, Dr Hoggett tells us the crucial things we need to know about the Great Barrier Reef – and how to save it.

Can you explain why the Great Barrier Reef is at risk? Can we attribute this to human influence?

The Great Barrier Reef is one of the best managed reef areas on the planet. Despite that, it’s still at risk from many sources and most of them are to do with the way we’re treating it.

The overarching threat is climate change. Reef-building corals can thrive only within a very narrow temperature range. Rising sea temperature has already caused repeated mass coral bleaching events – there have been four in the Lizard Island area in the past six years. The first two (2016 and 2017) caused huge areas of corals to die. The latter two (2020 and 2021) were not as severe because both times the weather changed to cloudy and rainy just in time to avoid mass death of corals.

Cyclones are a normal part of life in tropical regions. They can certainly smash corals but the effect is generally localised and reefs can recover with time. But ever-rising temperatures are making cyclones more destructive and the cumulative effects of bleaching and stronger cyclones are devastating.

Carbon dioxide emissions are also changing the pH of the oceans (‘acidification’). This can affect the ability of marine animals and plants to make their skeletons and it’s more insidious than bleaching. It’s a long, slow process that is not visible to the eye. It’s also difficult to measure its effect in real time and to design meaningful experiments to look at what might happen in the future. We do know that different species are likely to fare very differently under future pH conditions and this must affect ecosystem functions.

Another serious threat to the GBR is run-off from land. Rivers now carry a lot more nutrients and sediment into GBR waters than they did years ago. Agricultural fertilisers work in the sea too, allowing more plant plankton to grow. Increased sediment and plankton reduce water clarity – which is important for coral growth – and can and disturb food webs.

Crown-of-Thorns Starfish (COTS) are natural inhabitants of the GBR that eat coral. In low numbers, that’s not a problem for reefs. But when COTS break out into huge populations, they devour coral faster than it can be replaced and the reef needs years to recover. The jury is still out on whether nutrient pollution is involved in these outbreaks.

What is coral bleaching?

Corals are tiny, soft animals that can create huge coral reefs with their skeletons. That takes a lot of energy and they wouldn’t be able to do it without an amazing relationship that exists between corals and microorganisms.

Tiny ‘algae’ called zooxanthellae take up residence within the coral animal’s transparent body and they give corals a lot of their colour. The key part of the relationship for reefs is that zooxanthellae use sunlight to produce sugars that become food for the corals. The biochemistry of the relationship is astoundingly complicated – it can be affected by temperature, light and many other things.

Bleaching happens when something in the environment is out of the normal range – in mass bleaching, that ‘something’ is elevated temperature, often in concert with strong sunlight. Then, instead of producing food, zooxanthellae produce toxins and corals expel their symbionts to protect themselves – they literally spit them out. In the process, the corals lose their colour and the bright white skeleton can be seen through the transparent animal – hence ‘bleached’. The corals are still alive but they’re not at all well. If the environmental stress goes away quickly enough, corals can take up zooxanthellae from the water and recover. But if the stress lasts too long, the corals will die.

If the current state of affairs continues, what does the future of the Great Barrier Reef look like?

Corals have existed continuously on the planet for hundreds of millions of years. They don’t always make reefs and over geological time, coral reefs have come and gone. Even after repeated bleaching and cyclone damage, the GBR is showing – right now – how resilient it really is. Four years after the last major ‘disaster’ on the northern GBR, corals are rebounding strongly in many places. It’s a joy to see. But in the long term, disastrous events are predicted to become more severe and, for bleaching, more frequent. It’s difficult to see how reefs can continue to rebound so strongly again and again and again.

Why is it important for us to protect the Reef? What are the follow on effects of the Reef dying?

Coral reefs are among the most beautiful and diverse ecosystems on the planet. To me, that’s enough to make it important to protect them. But there are plenty of less sentimental reasons too. Nations earn substantial income from their reefs through tourism and fisheries; reef fish are a major protein source for a significant proportion of the world’s human population; reefs are a largely untapped source of pharmaceuticals for human benefit; and they protect coasts from storms and tsunamis.

The Reef is not dying – yet. In these early days of climate-change impacts, it has a good chance of recovery. But the long-term prospects are far from rosy. It’s unlikely that we will kill corals entirely but we could lose reefs as we know them within a few human generations. That would be a source of great shame for us as humans because there is still time to avoid it.

What is it going to take to make a change? What can we do that would have the biggest impact?

The only thing that is going to make a significant impact at this critical stage is to cut carbon emissions severely. It’s a global problem that needs a global solution quickly.

What is The Sapphire Project? Can you tell us a bit about it?

The Sapphire Project’s mission is to educate and inspire our Australian community to unite in taking action to protect our oceans. The group’s credo is Protect What is Precious® and it was founded by award-winning documentary filmmaker, artist, conservationist and philanthropist Susan Rockefeller.

The team behind The Sapphire Project want to inspire a huge groundswell of support for ocean conservation in Australia, and they gathered a formidable group of friends and ambassadors to help drive positive change, including Ian Thorpe AM, Sophia Forrest, Jarrod Scott, Sam Bloom and Ky Hurst.

Less than 2% of all charitable giving in Australia goes to the environment and within this, even less goes to the oceans. The Sapphire Project’s goal is to provide a platform to showcase organisations committed to ocean conservation and connect the Australian philanthropic community to this critically underfunded area.  In 2021, The Sapphire Project’s focus is on the Great Barrier Reef and we are hugely appreciative of their concern for oceans and for helping us to continue coral reef research.

What do we need to see on a government and policy level to rehabilitate the Reef?

We need serious action on climate change, and quickly. As a nation, we are not bearing our share of the global load. We have wasted valuable years and cannot afford to lose any more.

For individuals looking to make a difference, what can we do?

The single biggest thing that individuals can do is to encourage the government to act quickly and decisively on our behalf. Let your local member know that we need meaningful action to reduce carbon emissions urgently, and then tell them again. After that, think about how you use energy at home and make changes to reduce your carbon footprint if you can – especially insulation, heating and cooling. Small changes to daily life will also make a difference if many people do the same thing: eat less meat, choose locally produced food, avoid excessive packaging, and walk rather than drive when possible. Finally, visit the Reef if you can. While travel is undoubtedly carbon intensive (and will need to change), the benefits of some trips still outweigh the costs. The Reef is still well and truly alive and staggeringly beautiful. People who see it first-hand are its best ambassadors.

What is the biggest misconception you think there is about the Reef and its rehabilitation?

Reef restoration is currently a ‘thing’ and I think that many people are pinning their hopes on it as a long-term solution. That is misplaced. There is no way that reefs can be restored at even a tiny fraction of the scale that is needed to keep them functioning globally in the long term. At best, reef restoration is a stopgap. It may be able to keep small areas functioning over the next few decades while we get over the ‘hump’ of elevated temperature that is already locked into the system. But that depends on stopping carbon emissions very soon. Otherwise, it’s not a hump, it’s a mountain and we can’t yet see the top. Reef restoration will never provide a meaningful solution in that scenario.