The Crown of Thorns Starfish (COTS) is eating our coral 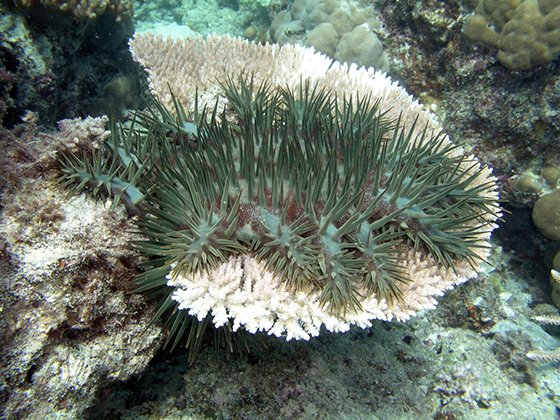 The Great Barrier Reef has lost half its coral since systematic monitoring commenced in 1985. The three major causes are storm damage (48%), COTS (48%) and bleaching (10%).  We can’t stop the storms or the bleaching associated with ocean warming, but we can act to reduce the impact of COTS. See AIMS (2012), animation map and recent surveys.  The current outbreak could develop into the worst on record.

Further research is required on causal factors and methods of containment. The Australian Museum’s Lizard Island Research Station is ideally located for COTS research.  It has hosted significant discoveries, such as the new single-shot injection technique shown in this video produced by LIRRF Trustee Helen Wellings and her all-volunteer team.

These videos from microdocs and Deep Oceans Foundation show COTS in action. And for a graphic view of COTS throwing up its own stomach to eat coral, see BBC Nature.

It is expensive to maintain first-rate marine research facilities on a remote tropical island.  Visiting scientists contribute as much as they can afford, but the Station could not continue without the ongoing support of the Australian Museum and LIRRF donors.

LIRRF is very pleased to have been received an Ian Potter Foundation 50th Anniversary Commemorative Grant of $500,000 to fund research on COTS.  See blog post. Further funds are required for additional research and to help contain the current COTS population outbreak.