The second in a blog series about our Lizard Island Research Station’s recovery from 2015’s Cyclone Nathan. 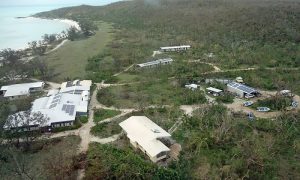 Day 4 of the evacuation: we are writing this update from our hotel in Cairns, where we are still awaiting word on when we will be able to return to the station.

Cyclone Nathan hit Lizard Island in the early hours of Friday morning as a category 4 system. Wind speeds in the centre of the cyclone reached 165 km/hr with winds with gusts up to 230 km/hr according to the Bureau of Meteorology. In comparison, Cyclone Ita last year only reached a top wind speed of 158 km/hr.

When the cyclone had passed, seven of us (staff and researchers) prepared to head back to the station yesterday afternoon. Unfortunately, the airstrip on the island had not been cleared for use so we were unable to use a fixed-wing charter. Instead Anne Hoggett, Lyle Vail and Alex Vail chartered a helicopter to get back to the station as an advance team. The most crucial initial tasks included ensuring the power and seawater systems were still up and running in the aquarium for the few experiments that were left set up and performing an initial assessment of the damage at the research station.

Anne, Lyle and Alex reached the station safely, and lucky they managed to get back in time to restore power to a various electronics that had turned off, such as the cold room with all our food. These problems were easily fixed as they were just tripped circuit breakers, but would have been disastrous if left for much longer with no one there to rectify the problem.

We can happily report that the fishes left at the station for various experiments survived the cyclone safe and happy! Other experiments such as Steve’s were still running, although the amount of sediment in the water during the storm caused some blockages. Alex and Lyle fixed these blockages late last night and Steve is very grateful to them for saving his experiment.

Initial assessments show no structural damage but a much larger number of minor things will need repair compared to following Cyclone Ita last year. Cassy’s house sustained some damage to the veranda while Anne and Lyle’s office window was broken, causing minor flooding. As with Cyclone Ita last year, many trees are down again, which will surely keep everyone very busy in the coming weeks.

Today we are patiently waiting in Cairns along with several other researchers who are hoping to return to the station soon.