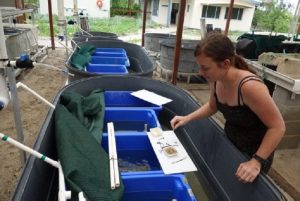 Cyclone Nathan is expected to hit Lizard Island in the early hours of Friday 20 March and grow to a Category 4 storm, hitting landfall at Cape Flattery at 4 am. Lying directly in its path is the Australian Museum’s Lizard Island Research Station, one of the world’s finest coral reef research facilities.

All 33 researchers and station staff were evacuated from Lizard Island on 18 March, and are safely in Cairns waiting out the storm.

Last week, Cyclone Nathan was forecast to pass near the island so we packed up the station and slept in the (cyclone-proof) lab for two nights. During this time, the cyclone moved away and no damage occurred.

But just as we were unpacking, Cyclone Nathan made a U-turn and headed back towards us again. The 33 of us at the station were evacuated on three flights to Cairns.

The research taking place at Lizard Island has been greatly disrupted. The research station is one of the few places in the world where field-based reef research can be done alongside lab-based experiments.

Exciting and long-term research projects underway were cut short, including two climate change-related projects. Steve Doo had an experiment running to determine how epiphytic organisms that live on macroalgae could protect their host in a warming and acidifying ocean. Lauren Nadler had experiments underway to see how fish schooling behaviour is affected by increasing temperatures and ocean acidification. Many other experiments had to be terminated, and will have to be restarted when the research station reopens.

While we wait out this cyclone, we can only hope that the research station escapes serious damage, as it did in the wake of Cyclone Ita last year.