COP21 underscores the importance of marine science in containing climate change and conserving life as we know it.

The Paris Agreement (PDF) aims to limit the increase in global average temperature to 1.5° above pre-industrial levels by balancing anthropogenic emissions of greenhouse gases and removals by sinks.

Oceans are massively important removal sinks by virtue of the air-sea exchange of CO2 and the amazing properties of blue carbon.

Blue carbon is carbon stored in coastal and marine ecosystems,  including mangrove, tidal marsh and seagrass areas.  They are many times more efficient than terrestrial forests in sequestering carbon and storing it for a very long time.

Australian scientists have developed an impressive body of blue carbon knowledge, based on research by the CSIRO Coastal Carbon Cluster,  Catherine Lovelock, Peter Macreadie, Paul York and many others.

Australia and the Blue Carbon Initiative convened a discussion at COP21.  Australia  announced further research,  funded through the NESP and led by the University of Melbourne.  Australia wants to count blue carbon as an offset in its national greenhouse gas inventory.

The additional research is required to confirm the inventory, currently estimated at around 2.5 billon tonnes, and to further inform conservation and restoration initiatives.  For example, although the importance of shallow water seagrass around Lizard Island (e.g. Thalassia hemprichii, Halodule uninervis and Halophila ovalis) is reasonably well understood,  less is known about the  contribution of deeper-water flora nearby (e.g.  Halophila spinulosa  and  Halophila decipiens).  See 2014 research by Peter Macreadie, Paul York & team.

A dense meadow of Halodule uninervis exposed at low tide on a sand flat at Lizard Island.  © Anne Hoggett 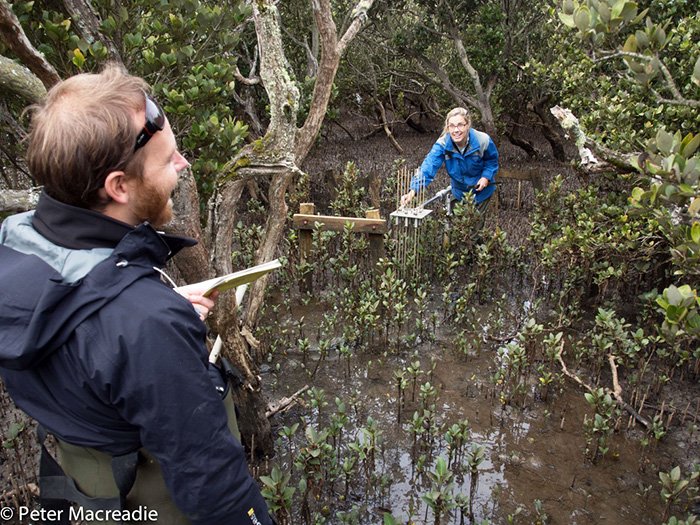 This brief silent video shows the beauty of vegetation in a salt marsh near the mouth of the Murray River in South Australia.

See more details about the Paris Agreement and this comment by Jon Plotkin – Two Decades Late And A Trillion Dollars Short – But It’s a Start.