My research at Lizard Island sought to answer two questions: 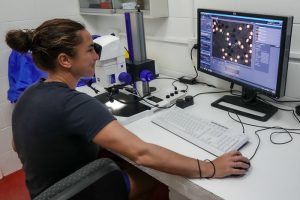 To answer these questions, I first had to find reefs where my target species grew and choose which would be the best to work with. I chose the lesser-known ‘brooding’ corals rather than ‘broadcast spawning’ species. Broadcast corals release sperm and unfertilised eggs into the water, often in a single burst over just a few nights once a year.  Brooding corals fertilise internally, nurture their planulae inside their bodies and do not release them until they are capable of independent settlement; and their breeding season usually spans several months.  I hypothesised that these characteristics would render them more likely to pass on any heat tolerance they had developed to their offspring.

Little work has been done on brooding species in recent years. I first had to rediscover their natural reproductive patterns.  I found notable changes in the reef-building species Stylophora pistillata. This species grows in a branching form. It is an important reef-builder, providing shelter to small fish and invertebrates, and was once abundant in the Lizard Island lagoon. However, I found very few colonies remaining, and that they were producing planulae in abnormally low numbers, or not at all. Dissections showed few signs of reproductive effort.  This was probably because they had not recovered from the stressful mass-bleaching events of recent years. 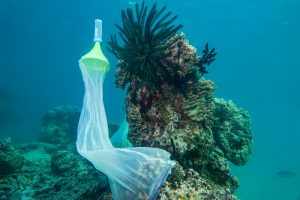 I built a temperature-controlled aquarium system at the Lizard Island Research Station and used it to house planulae collected from the reef each night using a net placed around the parent coral. I chose to work with Pocillopora acuta since it belongs to the same family as S. pistillata, is still abundant in the Lizard Island lagoon, and reproduces in large enough numbers to conduct experiments. 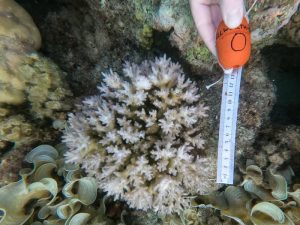 Initial results indicate that larval survival was not significantly influenced by a water temperature up to 32°C. That is good news for this species in the context of climate change. However, we must still be cautious, because my study covered only one species and one life stage. How other brooding corals in the area will react to inevitable future thermal stress is yet to be investigated.

Finally, tissue of parent corals and larvae were taken to the University of Queensland in Brisbane. Here, important qualities such as protein and carbohydrate concentration and the number of symbiotic algae within the tissue were assessed. The sugars these algae produce during photosynthesis is the coral’s main food source.

Overall, results were highly variable both between different parent corals and within the planulae produced by one parent. They showed parental condition is not always a good predictor of planulae condition. I interpret this diversity as a good sign.  It increases the chance that some will be able survive in a wider range of environmental conditions. In a time when humans are rapidly changing the marine environment, such “bet hedging” may prove to be the optimum strategy.

This work will serve as new baseline for brooding corals around Lizard Island. These data can also be compared to corals from other regions; in particular in the Red Sea, where corals are so far showing resistance to warming seawater temperatures. The information could inform selective breeding programs to determine the coral parents best adapted to our future sea temperatures.

My Fellowship enabled me to experience an entirely different coral ecosystem to the Red Sea reefs I have studied. I faced new challenges such as relatively low working visibility and getting the best from a coral reef in recovery. My optimism for future coral reefs surged; whilst there are obvious signs of human damage around Lizard Island, I also witnessed areas with phenomenal signs of fast recovery and hope. Corals are strong resilient animals, and if every individual person plays their part in rapidly reducing our greenhouse gas emissions, I know reefs will persist.

Finally, thank you to Station Directors, Anne Hoggett and Lyle Vail, who were most helpful throughout the entire project, from planning to packing up. The Research Station is incredibly well managed by them and they consistently provide spot-on advice. And my greatest thanks to LIRRF and the Raymond E. Purves Foundation for providing my Fellowship. This was my first time on the Island, but hopefully not the last.

[Jessica Bellworthy is a PhD student at Bar Ilan University, Israel.  She was awarded a 2019 Lizard Island Doctoral Fellowship funded by the Raymond E Purves Foundation through LIRRF.  Ed.]