A tribute to Ken Coles AM 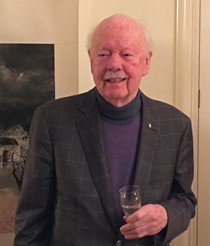 Ken at a function to celebrate his 90th Birthday in 2016. Photo: Charlie Shuetrim.

Ken Coles AM was a Trustee of the Lizard Island Reef Research Foundation (LIRRF) from 1991 to 2015 and Chair from 1994 to 2012. During this time he transformed the Foundation and the Australian Museum’s Lizard Island Research Station (LIRS). Ken died peacefully on 18 January 2022 with his wife Rowena Danziger AM at his side.

This is a brief outline of his achievements during his long tenure.

Sir John Proud was the founder of LIRRF and he and Ken were good friends. It was Sir John who first suggested to Ken that he should consider becoming involved with LIRRF. Ken’s response was that he knew little about the Great Barrier Reef or marine science but he was happy to see what he could do. Ken and Rowena visited Lizard Island later that year and met with Anne Hoggett AM & Lyle Vail AM, Directors of LIRS. They were able to view the reef and understand the exciting opportunities offered by research at Lizard Island so Ken was pleased to become a Trustee of LIRRF in 1991. 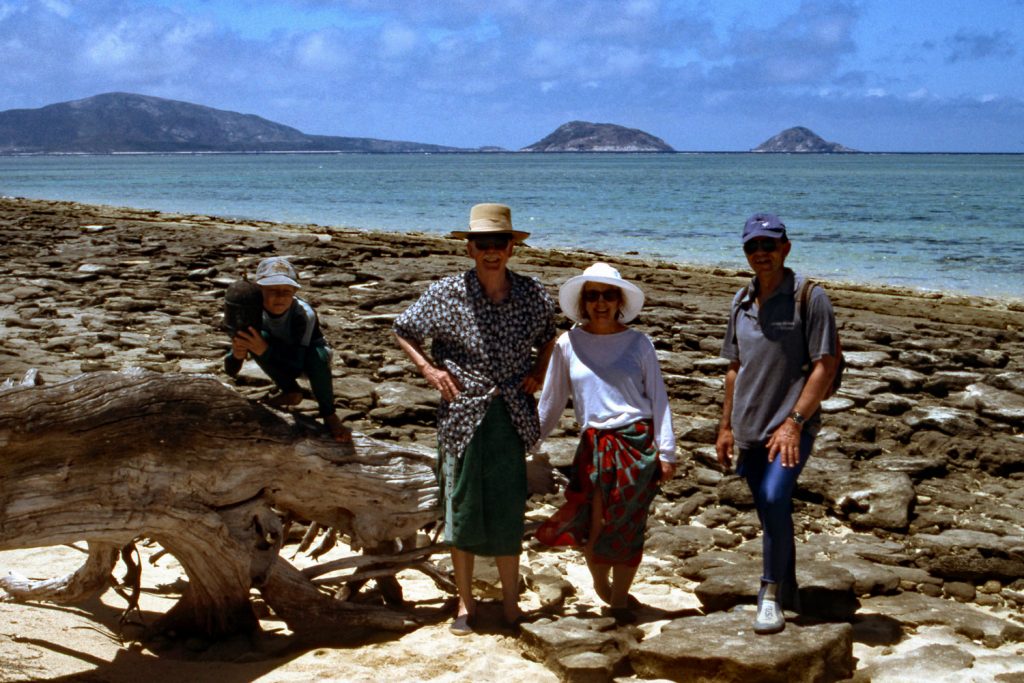 Ken & Rowena on Eagle Island in 1995. This was Ken’s first trip to LIRS since becoming Chair. Lyle Vail and Alex Vail are also in the photo. Photo: Anne Hoggett.

In 1993, Ken was instrumental in establishing the fund raising principle which still serves LIRRF well today. The original concept, 100 supporters, each donating $1,000, would provide $100,000 per annum funding towards the Research Station. Apart from special purpose grants for research and fellowships, annual donations from LIRRF supporters, who include many of Ken’s original supporters, now provide over $200,000 p.a. all of which goes to support research at LIRS. 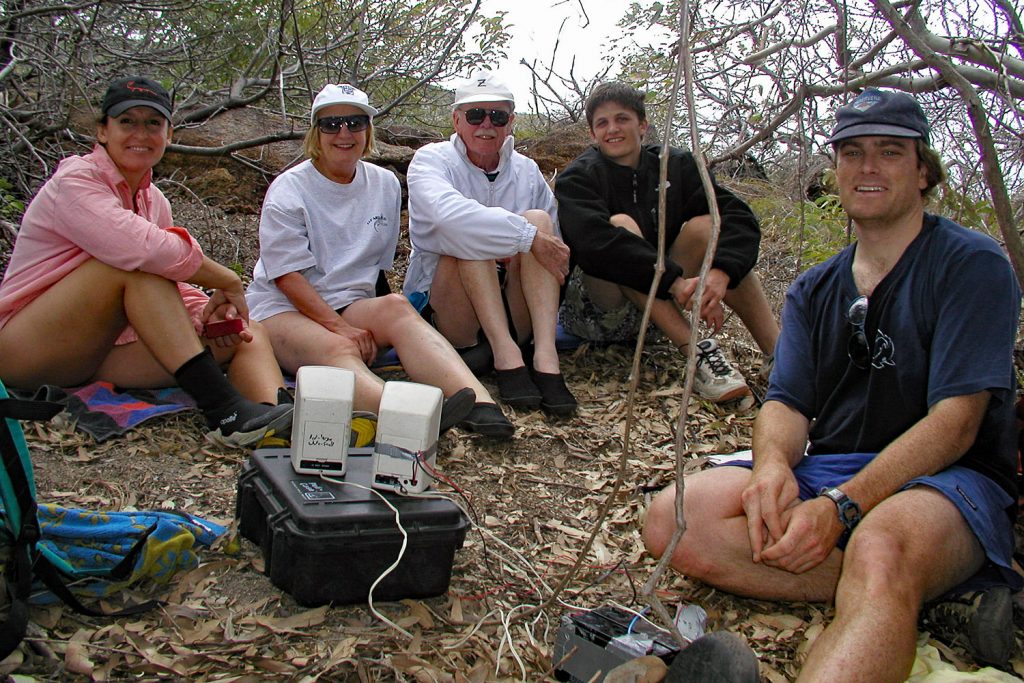 Ken and Rowena at LIRS in 2002. Here they are with Jason Gedamke and his team who were researching the sounds of Minke whales. Photo: Lyle Vail. 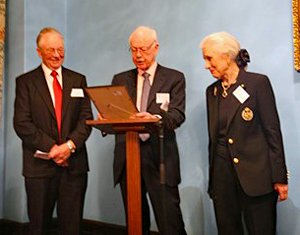 Melbourne Lunch 2010. Ken presented Lady Potter with a certificate honouring The Ian Potter Foundation as a Patron of LIRRF.

Ken initiated the annual LIRRF dinner, the first of which was held on the roof top of the Australian Museum in October 1994. Sixty-nine guests, including Sir John and Lady Proud, attended. Annual Melbourne lunches were inaugurated in 1998 and these have morphed into annual dinners as numbers of attendees have grown. These functions have fostered a collegiate atmosphere among LIRRF supporters. Science talks from LIRS researchers and Research Station updates are also a feature of the functions.

The first major building projects under Ken’s Chairmanship were the 1995 extensions to Kirby House and Suntory House. Each house now had three bedrooms, enlarged kitchen, dining and verandah spaces and two bathrooms.

His next major project was accommodation for the LIRS staff. The two existing houses had been built in the early 1970s and provided primitive accommodation that had no cyclone protection. Ken launched a special appeal, recruiting twenty people each of whom committed to give $5,000 p.a. for three years. This enabled the construction of Warman House (named after Dr. Charles Warman AM, a colleague and friend of Sir John Proud and a patron and generous donor to LIRRF), a much more suitable three bedroom residence. It was finished in June 1997 as accommodation for the Directors. Fund raising for Coles House, the accommodation for the permanent maintenance staff, continued and it was finally completed in 2001. 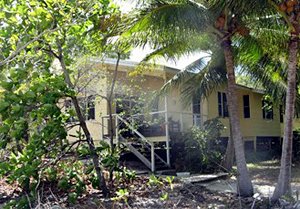 Warman House – accommodation for the Directors. 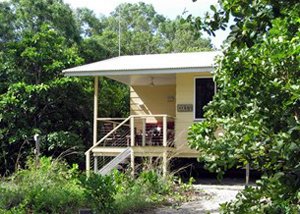 By 2003, LIRS was thirty years old so LIRRF initiated the 30th Anniversary Development. Ken was one of three Trustees on the organising committee and was instrumental in enthusing many of the long term supporters to make substantial commitments. Just over $5,000,000 was raised and this enabled every facet of LIRS to be updated so that it could continue to meet the vision statement (repeated below) from Anne and Lyle when they were appointed Directors in 1990: 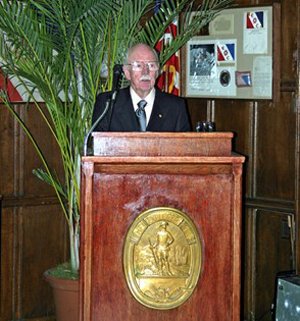 One of Ken’s more unusual tasks during fund raising for the 30th Anniversary Development was to host a dinner in New York at the Explorer’s Club. A number of the US based LIRRF supporters attended along with a large crowd of other potential supporters.

“We want Lizard Island Research Station to become the preferred venue for coral reef research by scientists from all over the world. This can be achieved by ensuring that the environment is maintained in near-pristine condition and by providing superior research and housing facilities.”

Ken, as Chair of LIRRF, hosted a large contingent of visitors to LIRS in October 2006 for the official opening of The Ian Potter Centre for Tropical Marine Research. 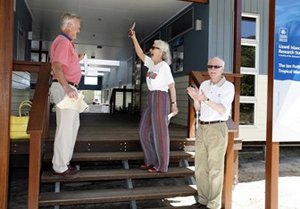 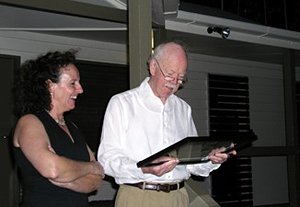 During the ceremony, Anne presented Ken with a certificate recognising the naming of a new species after him.

The final construction for the 30th Anniversary Development took place in 2011. Remarkably, the whole project had been completed on time and within budget. 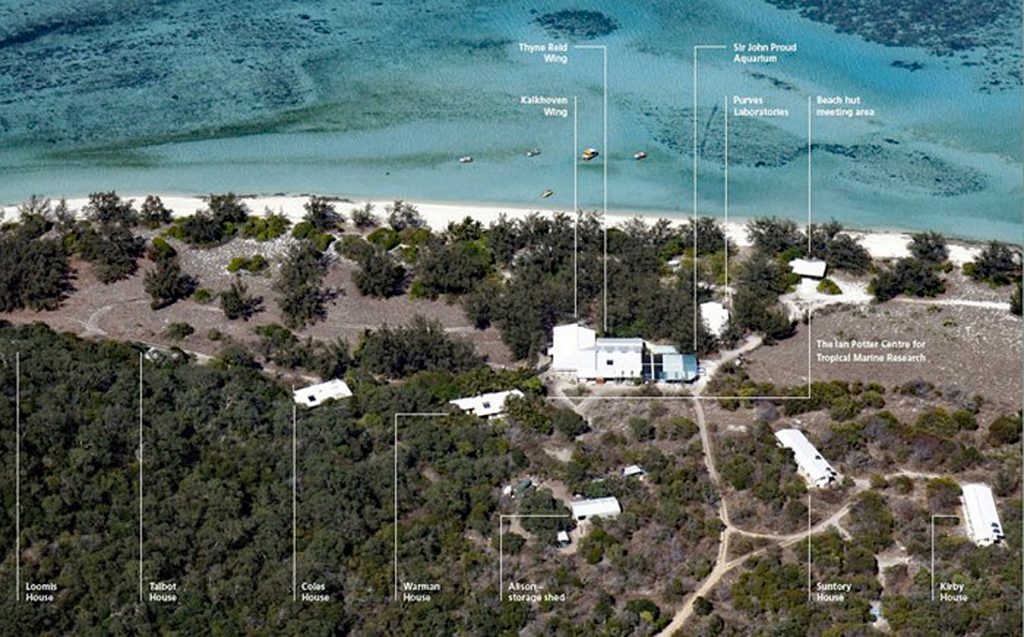 Lizard Island Research Station as it was when construction for the 30th Anniversary Development was finished in 2011. Under Ken’s Chairmanship, every building was either new or significantly upgraded. Other significant upgrades included new boats, solar power, upgraded laboratory equipment and doubling the size of the aquarium.

Ken retired as Chair of LIRRF in 2012 but he left one major parting gift. He proposed that LIRRF should appoint Life Members, being those people who would commit to give $100,000, over several years if necessary. Ken and Rowena became the inaugural Life Members and others have joined them so that over $1,000,000 has been raised to date. 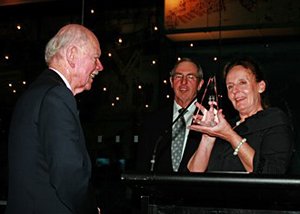 Anne presented Ken with an award recognising his remarkable service to LIRRF. This was at the annual dinner in 2012 on the occasion of his retirement as Chair of LIRRF. 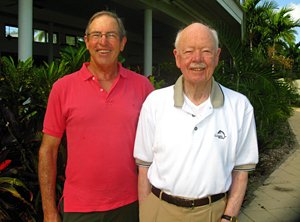 David Shannon became Chair of LIRRF when Ken retired from that position in 2012. Here are Ken and David at LIRS shortly after David assumed his new role.

Ken remained a Trustee of LIRRF until 2015 and was appointed Trustee Emeritus upon his retirement. Ken also made many other contributions to worthy causes, some of which were recognised in his honorary degree conferred by the University of Sydney in 1999 and in his investiture as a Member of the Order of Australia in 2000, and most recently for his work with the Save Sight Institute.

His contributions to coral reef science and to LIRRF and LIRS are a lasting legacy and his enthusiasm, drive and generosity will long be remembered.