In early 2020, the Great Barrier Reef suffered its third major coral bleaching event in five years due to heat stress.

At Lizard Island, bleaching first became noticeable in mid-February. February is normally “wet season”, with clouds and rain that keep the sea temperature down despite the tropical summer heat. But this year, the weather was clear and mostly calm, just as it had been four years earlier in the lead-up to the 2016 bleaching event. That year, coral loss in this area was extreme – more than 75% died.

Initially, it seemed that we were in for a re-run of the devastating 2016 event. It was quite horrifying to see corals start to bleach en masse again, just as the recovery process was becoming really noticeable in some places.

Luckily, the weather pattern changed in time to avoid major mortality this time. In mid-March, Cyclone Gretel formed far offshore, bringing clouds, rain and wind which lowered the water temperature. In 2016, high temperature persisted for much longer and the accumulated heat stress was extreme, continuing to kill corals throughout winter.

A tiny proportion of corals have already died from the 2020 bleaching at Lizard Island but we don’t expect that to continue. And while many colonies are still bleached at present, many others are beginning to regain their colour and that will increase in the coming months.

These photos show changes over time in two sets of corals.

One month into the bleaching event at Clam Garden, Lizard Island, most corals show some level of bleaching and some are fully bleached. Coral A is fluorescing, a stage before complete bleaching. Coral B is almost completely bleached. Coral C has only just started to bleach. Photo: Anne Hoggett

Two weeks later, bleaching has progressed. Coral A is paler and some patches around the edge have died. Coral B has died. Part of coral C has died. Photo: Anne Hoggett 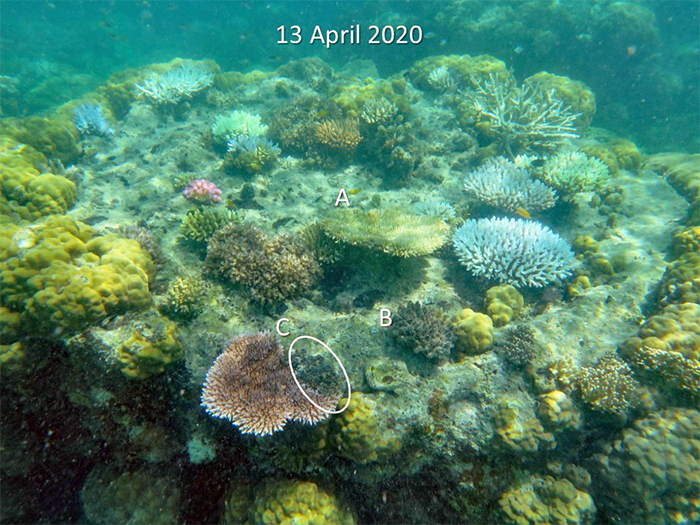 Two months after the bleaching started and a month after water temperature started to decrease, the whole of coral A has died, dead coral B has a thicker coating of algae, and no more of coral C has died. Some of the other bleached corals remain bleached while others have regained some colour. Photo: Anne Hoggett 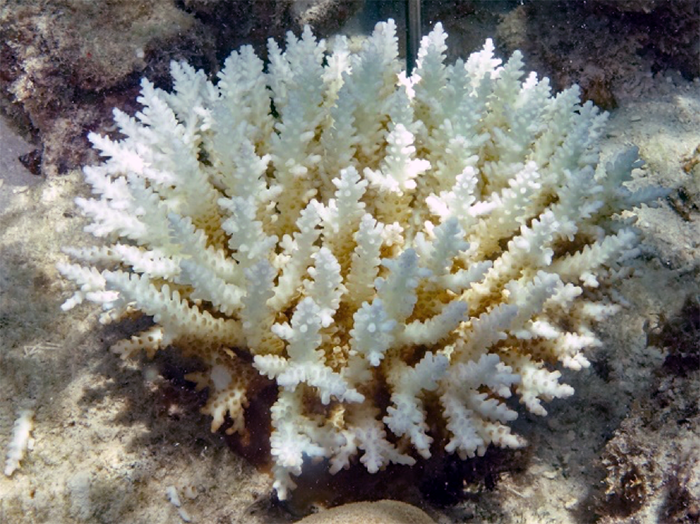 Photographed on 1 March 2020, this coral has almost completely bleached but it still has some colour at the bases of its branches. Photo: Anne Hoggett 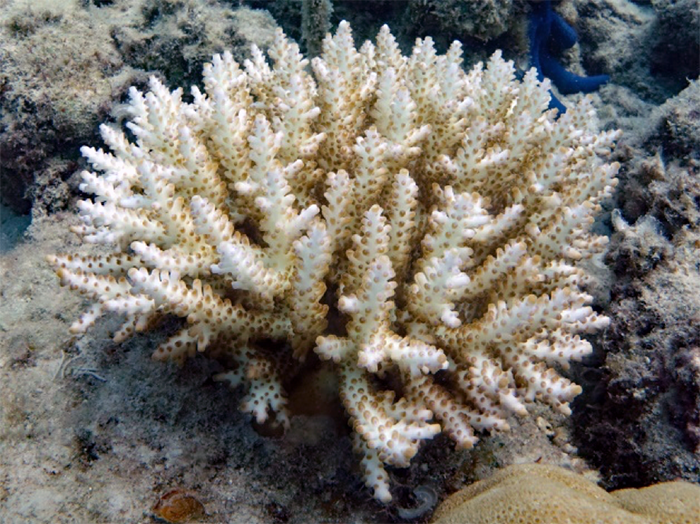 By 14 April 2020, a month after water temperature started to decrease, no parts of this coral have died and it is well on its way to regaining its normal colour. Photo: Anne Hoggett

Corals at Lizard Island – and the legions of life that depend upon them – have dodged a bullet this time around. It was a close call. Unfortunately, it appears that other parts of the Great Barrier Reef have not been so lucky.

We have seen quite amazing levels of recovery since the 2016 and 2017 bleaching events. This is a welcome demonstration that reefs can regenerate themselves after extreme damage, given the right conditions. But how long can they continue to do so in a world where conditions that cause such extreme damage occur with increasing frequency?

[Dr Anne Hoggett is a Director of  the Australian Museum’s Lizard Island Research Station. Resident there since 1990, she has seen years when corals flourished; and years when they have been devastated by Crown of Thorns Starfish,  direct-hit cyclones or bleaching sea temperatures. The history of the Station is told in its Annual Research Reports and in Lizard Island Research – a partnership.

Anne was interviewed about coral bleaching and the 2020 event by Megan William on 3CR Community Radio. The very informative MP3 podcast is available here. Ed.]