Tory Chase  is a PhD student at JCU /CoralCoE. In 2015 he spent 4 months as an Intern at the Australian Museum’s Lizard Island Research Station. 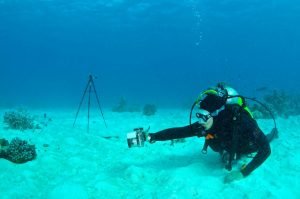 Tory films colonies of damselfish on a P. damicornis coral colony in a sandy lagoon site.

He was endeavouring to quantify the prevalence and intensity of coral-fish interactions, specifically between aggregating damselfish and small branching coral colonies. This involved extensive surveys and video observations of damselfish at sites within the Lizard Island lagoon.

Tory’s collaborators included Saskia Jurriaans, Grace Frank and Margaux Hein.  They  took hundreds of photos of coral colonies with and without damselfish to analyse micro-structure features that may play a role in the relationship. The team chose damselfish because of their prevalence and that fact that they are usually found in schools around corals.

The coral bleaching added a layer of complexity,  affecting  fish behaviour and senses. Working with the coral ecophysiology lab at JCU, the group was  able to compare bleaching severity between different species of Acropora corals at various locations around lizard in different reef habitat types.  See Tory’s post on Losing Nemo – bleaching on the Great Barrier Reef.

A second test measured the the association between fish and coral, testing whether and how fish behaviour varies in different coral colonies and reef habitats. GoPro videos recorded behaviour of the fish, distance from the colony, visits to the colony, where the fish slept and how aggressive they were. Here is an example:

Tory had four inspirations for becoming a marine scientist:  David Attenborough, Jacques Cousteau (father of scuba), Jules Verne’s  Twenty Thousand Leagues Under the Sea and a movie, The Little Mermaid.