I am a PhD candidate in Archaeology at JCU.  I have recently completed a 4.5 month internship at the Australian Museum’s Lizard Island Research Station that enabled me to gain valuable professional development skills as well as conduct research for my PhD project.

Preparation for my research included consultations with Dingaal Traditional Elders, internships at the Australian Museum and the Queensland Museum Malacology Departments and literature reviews of previous archaeological surveys in and around Lizard Island. 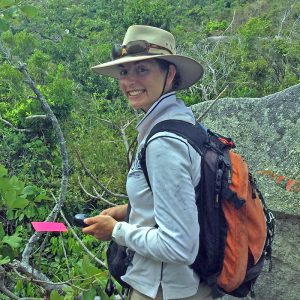 I conducted new extensive archaeological surveys on 5 islands within the Lizard Island Group during my internship. This first phase of fieldwork was important for discovering and documenting previously unrecorded archaeological shell midden sites – places where people gathered to camp and share food in the past. What’s exciting is that Dingaal Traditional Custodians have a rich history within this region of the Great Barrier Reef (GBR) extending back thousands of years and we are discovering the evidence for this on the islands – some of which have never been archaeologically surveyed. 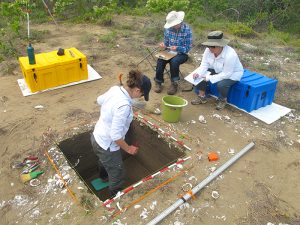 In 2013 I worked on the Mangrove Beach Headland Midden excavation for my Honours project lead by Professor Sean Ulm (JCU) and Professor Ian McNiven (Monash). The site revealed a 4, 000 year sequence of Indigenous occupation. Dingaal fishers specialised in harvesting shellfish species from nearby reef patches from around 2, 000 years ago including the Strawberry Conch (Conomurex luhuanus), Trochus  (Tectus niloticus), Giant Clam (Tridacna maxima) and Spider Conch (Lambis lambis). None of the species identified in the 2013 excavation appear over exploited with most recovered specimens achieving an adult size-at-age profile.

My PhD project addresses a critical gap in our knowledge of how Aboriginal people exploited and managed GBR resources for thousands of years before industrialised European fisheries extraction. This data is essential to form a long-term perspective on sustainable fishing along the GBR. Archaeological predation studies on Aboriginal and Torres Strait Islander subsistence over the last 10, 000 years in the GBR has received surprisingly little attention given the focus on establishing pre-European baselines for fisheries management. Fin-fish have not been targeted for detailed archaeological studies within the contemporary GBRMP boundary, and only two limited studies have been attempted on three shellfish species in the past. 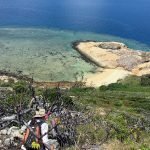 The Reef 2050 Long-Term Sustainability Plan aims to protect marine species from anthropogenic pressures including commercial and recreational fishing, climate change and land-based run off. My research will provide, for the first time, a long-term (around 10, 000 years) record of the use, vulnerability and sustainability of GBR fisheries, focused on shellfish and fin-fish. It will also incorporate middens excavated from the Whitsunday Island Group, the Keppel Island Group and the Shoalwater Bay Island Group. Archaeology materials will be analysed in the Tropical Archaeology Research Laboratory at JCU in Cairns.

My research is supported by an Australian Postgraduate Award and an Advance Queensland PhD Scholarship from the Queensland State Government. I would like to express my appreciation to the Dingaal Traditional Custodians, the Australian Museum and to Dr Anne Hoggett and Dr Lyle Vail for their hospitality and support.