Seaweeds are just as sensitive as corals to ocean warming

Alexia Graba-Landry is a PhD candidate at the ARC Centre of Excellence for Coral Reef Studies, James Cook University 2017-2019. She was a LIRFF Lizard Island Doctoral Fellow in 2017. 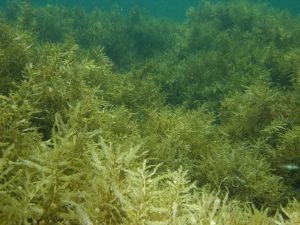 Ocean warming is one of the greatest threats to coral reefs. Increasing temperatures have already caused mass coral bleaching events, which, if severe and frequent enough, lead to widespread coral mortality. Overgrowth of seaweeds is a threat to future coral reefs, as dead coral skeletons are rapidly colonised by canopy forming seaweeds and turf algae. Once seaweeds are established it is hard for new coral recruits to compete for space to grow. However, little is known about the sensitivity of the seaweeds themselves to temperature and how this may influence seaweed overgrowth on coral reefs.

We measured growth, physical toughness, nutritional quality, and survival. We also measured susceptibility to herbivory by deploying the cultured seaweeds onto the reef, and filming them for 3 hours and recording bites by the wild herbivore assemblage. 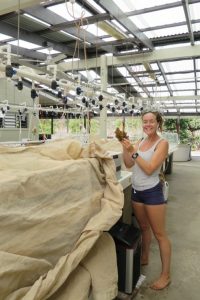 We found that increasing temperature decreased the growth and survival for all species at both adult and juvenile stages. Nutritional quality and physical toughness was also reduced in two of the three adult species. Susceptibility to herbivores also decreased in two of the species, with the wild herbivore assemblage preferring seaweeds cultured at lower temperatures. 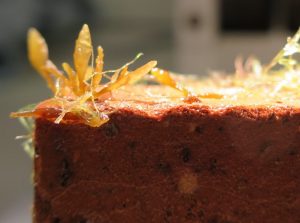 Figure 3: Juvenile Sargassum on a tile from the ambient (28°C) treatment.

Our results indicate that canopy forming seaweeds like Sargassum may be just as sensitive to increasing temperature as their coral counterparts. Therefore seaweed overgrowth following mass coral bleaching events may be less likely as previously assumed. Instead we might see a rise in novel ecosystems low in both coral and seaweed cover as ocean temperatures continue to increase.

I am grateful for the LIRRF Lizard Island Doctoral Fellowship that funded this study. It has also funded two additional chapters of my PhD further investigating the effect of temperature to seaweed-fish interactions and how they may shift as oceans continue to warm. It is an important question for both ecology and management to help predict the future seascape of coral reefs.