Coral reefs comprise only 7% of the Great Barrier Reef World Heritage Area.  The rest is an extraordinary variety of marine habitats, including algal and sponge gardens, mangroves, tidal marshes, sand… and seagrass.  Fifteen species of seagrass are found in the GBRWHA.

Blue carbon is carbon sequestered and stored in marine ecosystems. Most of this sequestration is performed by seagrasses, tidal marshes and mangroves.  Although they occupy only 0.2% of the ocean floor, these coastal ecosystems sequester around 50% of the earth’s blue carbon. This has important implications for the mitigation of climate change.  It could also work in reverse.  If anthropogenic degradation causes stored carbon to be released back into the water and atmosphere, such areas become part of the problem rather than part of the solution; carbon sources rather than carbon sinks.

Most research has focussed on shallow-water seagrasses. They have been found to sequester carbon at a rate 35 times faster than tropical rainforests and bind it for millennia.

Less is known about the sequestration capacity of seagrass varieties growing in deep water.  The Barrier Reef’s deep-water seagrass areas are among the most extensive on earth, occupying over 40,000 square kilometres.  This area has only been scientifically surveyed and mapped over the last decade or so.  Prior to that it was virtually unknown. 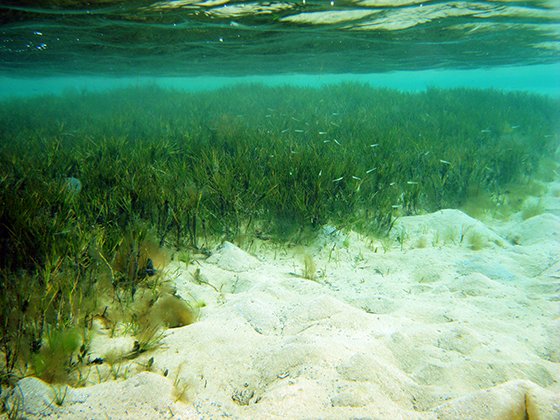 A James Cook University team led by Dr Michael Rasheed has been monitoring the dynamics of deep-water seagrasses at Lizard Island and elsewhere on the Great Barrier Reef. The 2014 LIRRF Isobel Bennett Marine Biology Fellowship has been awarded to Dr Paul York (JCU) and Dr Peter Macreadie (UTS Sydney) to build upon that work.  They will test how the carbon sequestration capacity of seagrass various with water depth, latitude and bed persistence. Using carbon fingerprinting techniques, they will also investigate the sources of carbon to deep-water seagrass and determine the relative importance of carbon produced by photosynthesis as opposed to carbon produced from external sources such as terrestrial run-off.  Such information is critical for policy decisions on the protection of Australian seagrasses and their inclusion in carbon offset and abatement schemes.

This is a video of Peter, Paul and the team arriving and working at Lizard Island.  Was marine science meant to be this much fun?

Peter & Paul speak about their research here on Radio Marinara. (Their interview starts at around the 26-minute point on the time bar)

Rob Coles, Michael Rasheed, Paul York and others have published a paper on managing GBR seagrasses.  It reports a worrying decrease in abundance and area since 2007 as a result of severe tropical storms and associated floods exacerbating human  stressors.  It concludes that current management is inadequate.  More emphasis needs to be placed on the connectivity between seagrass meadow health, watersheds, and human terrestrial activity.