Rise of the turfs: unlocking the secrets of our changing reefs

Following a COVID enforced delay, Dr Stephanie Gardner heads to LIRS in late March to spend two weeks, supported by two PhD candidate assistants, researching the characteristics of turf algae in the region.  Lizard Island represents the northerly most point of her research which includes various latitudinal studies along our east coast (other regions include One Tree Island, Solitary Islands off Coffs Harbour and around Sydney).  Despite delays in getting to Lizard, Steph notes this has given her the opportunity to complete preparatory work in trialing and testing her methods and equipment with great success within NSW.

In areas where coral reefs are degrading and surrounding community structure changing, we’re seeing many examples of an increase in macro algae and other organisms.  This includes what is known as “algal turfs”, fast growing carpet like multi-species assemblages of filamentous benthic algae, including macroalgae and cyanobacteria, that are typically less than 1 cm in height.  As turf-dominated reefs are likely to be more prominent under a changing climate, it’s important that we understand what sort of role these turfs will play in shaping future coral reef and other ecosystems.

We look forward to updating you on Steph’s and her team’s progress.  Steph was awarded the 2020 Raymond E. Purves Foundation Postdoctoral Fellowship.  Ed.

Ecosystems worldwide are being altered due to anthropogenic climate change (Fig. 1). In marine ecosystems, one of the most striking impacts of climate change is the tropicalisation of temperate reefs, where warm-water species such as tropical fish and reef-building coral shift poleward to waters typically considered temperate, and cool-water species like kelp recede, leading to the emergence of turf-dominated, economically less-desirable systems.

Turf algae are dense, multi-species assemblages of filamentous benthic algae that are typically less than 1 cm in height. If turf-dominated systems are the resilient ecosystems of the future, detailed characterisation of their functional ecology and potential ecosystem services is urgently needed. The aim of this project is to characterise turf-dominated communities and the biological and environmental factors leading to their success across a latitudinal gradient along Australia’s east coast.

With the increasing abundance of algal turfs on coral reefs and reefs generally, it is important to study their interactions with marine organisms and uncover indicators of how communities will change in the future. We predict that turf-associated microbial communities within tropicalised reefs will have lower diversity, abundance and richness compared to coral-dominated reefs, but share core bacterial functional groups responsible for roles (such as nutrient cycling) that contribute to the establishment and success of turfs. Uncovering the mechanisms and key microbial players that allow algal turfs to dominate under future climate scenarios has the potential to transform our understanding of how reefs will persist into the future.

I am very grateful for the LIRRF Fellowship opportunity made possible through the generous contributions of the Raymond E. Purves Foundation. This funding has allowed me to undertake novel research and is facilitating my overarching professional and personal goal to help safeguard the future survival of our reef systems, to ensure future generations have the same privilege to experience their beauty, biodiversity and services as we have been fortunate to. 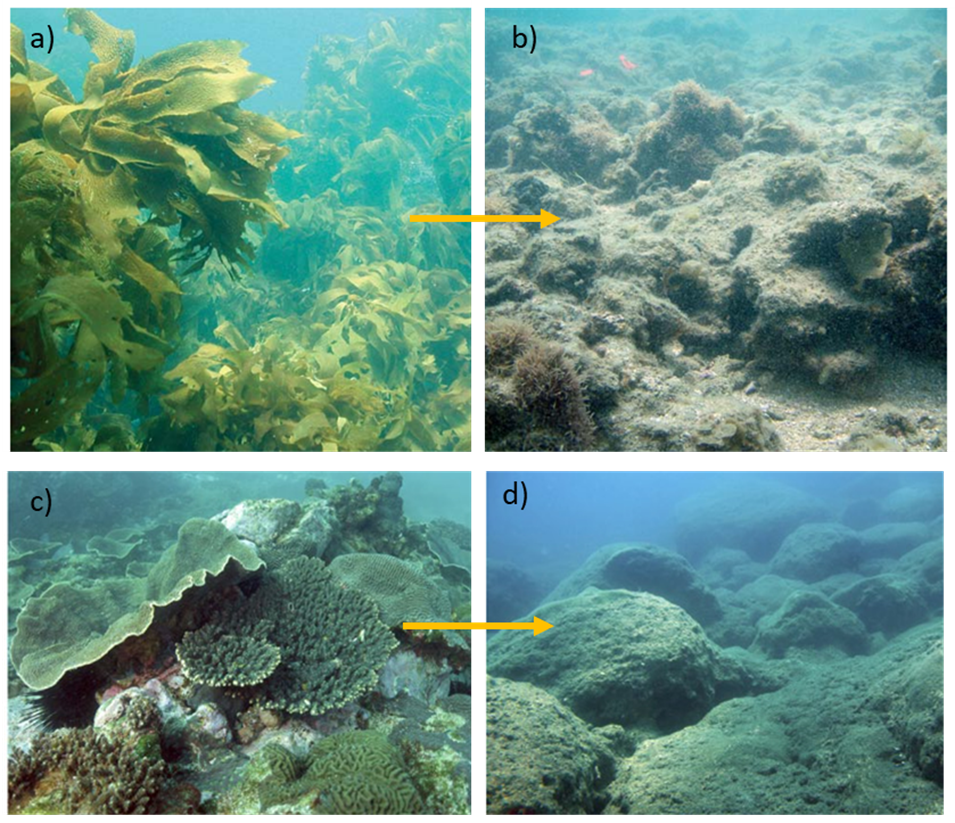 Figure 1.  Transitions from a) kelp to b) turf-dominated reefs and coral-dominated to turf reefs predicated under climate change.