The health of a coral reef is measured by the life and diversity of the entire reef ecosystem, not just by the health and abundance of corals.  When coral populations are significantly reduced, there is a reduction in populations of other reef animals.

Many marine animals use sound to communicate and navigate.  Fish whoop, croak, grunt, pop, crunch and scrape.  Some make chirping sounds like bird calls. Crustaceans click and snap their claws. Sound travels much faster and further in water.

The noisy soundscape (i.e. the aggregate sound) of a healthy reef can be heard many kilometres away.  In contrast, the soundscape of a reef degraded by cyclones and bleaching is a distinctly quieter chorus with less voices.

The fertilised eggs and larvae of most reef animals initially float free in ocean currents, forming part of the plankton.  Larvae gradually develop the strength and ability to navigate independently of currents.  The soundscape of a reef attracts them to a habitat where they will settle for the next stage of their life. 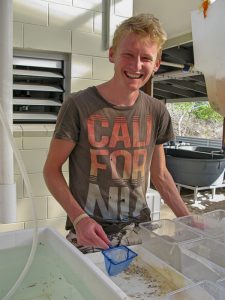 An international team of scientists led by Tim Gordon from the University of Exeter has conducted research at lizard island using two groups of nocturnal reef sound recordings. Ten local reefs were recorded in November 2012, when they were in good condition.  The same reefs were recorded again in November 2016, following severe degradation by two major cyclones (Cyclone Ita in April 2014 & Cyclone Nathan in March 2015) and the mass coral bleaching event that occurred in early 2016.

The research team played the 2012 and 2016 recordings at night from underwater loudspeakers attached to light traps (investigating presettlement larval preferences) and patch reefs (investigating juvenile settlement behaviour). It also set up a control set of light traps and patch reefs using only ambient open-ocean sound (recorded several kilometres offshore from the Outer GBR, where no reefs were audible) 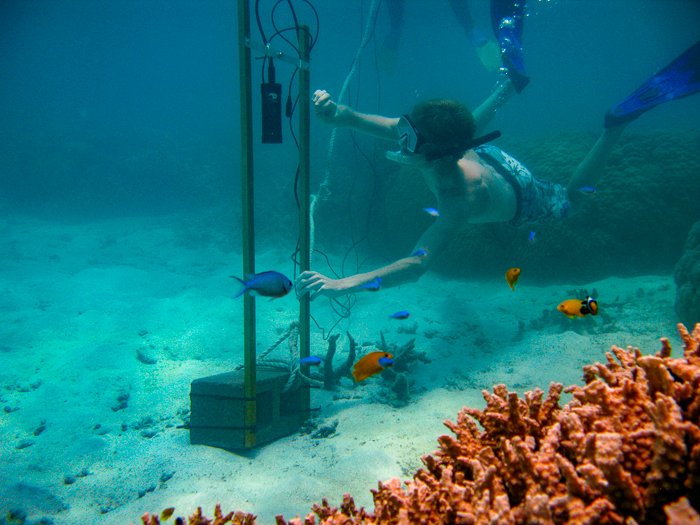 Listen carefully to the initial  2012 soundscape and the degraded 2016 soundscape that immediately follows in this one-minute YouTube video: