You are here: Home / Posts / Fish perception, memory and learning

Field research by Dr Ulrike (Uli) Siebeck and her team at the Australian Museum’s Lizard Island Research Station is busting the myth that fish have a short span of memory and lack ability to learn.

Reef fish live in a dynamic, colourful environment. Like other animals, they have to discriminate between predators and prey, members of their own species and different species, and members of their immediate school or group. If they make mistakes they could lose their mate, food, or life.  Uli’s research centres on the visual perception and neuroethology of reef fish. (Neuro refers to the nervous system, including the brain; and ethology is the study of animal behaviour.)

Working with Ambon Damselfish Pomacentrus amboinensis, Uli’s team is measuring colour vision, ultraviolet sensitivity and pattern perception. It is also assessing the ability of reef fish to learn, remember and distinguish complex patterns and objects, using methodologies derived from human psychophysics. (Psychophysics quantitatively investigates the relationship between physical stimuli and the sensations and perceptions they affect.)

Uli and her team are also investigating the effect of coral bleaching from the perspective of fish visual perception. Fish coloration has evolved within the context of the colours of healthy reefs. During bleaching, the reef changes colour, and Uli’s work shows  that fish which were previously camouflaged, suddenly appear highly conspicuous to predator eyes when seen against a background of bleached coral. Uli and her team are investigating possible consequences of coral reef bleaching on reef fish behaviour (colour communication) and survival during different life stages. 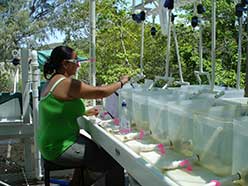 Increased CO2 in our atmosphere is causing increased CO2 absorption in our oceans. Other studies show that various senses are affected if fish are exposed to elevated levels of CO2, including olfactory and predator recognition. Are fish till able to learn to visually discriminate objects in CO2 enriched waters?  If they are attracted to predator odours, can correct visual clarification prevent them from going up to a predator and being consumed?

The research team has an experiment running with twenty fish. Ten are a control group in water taken straight from the reef, with ambient CO2 levels. The other ten are slowly being exposed to increasing levels of CO2. The abilities of both groups to associate a
food reward with certain patterns and then, to learn to discriminate the positive pattern from other patterns are compared to determine if visual learning will be negatively impacted by ongoing ocean acidification.

‘What I still find amazing after many years of training fish is that you can catch a fish and stick it into an aquarium and within 2 days it will learn to feed from a feeder filled with fish flakes. In another 2-3 days later it will have associated the food reward with a certain colour or pattern. We have already demonstrated face recognition in these guys.’ – Dr Uli Siebeck