You are here: Home / Posts / My visit to the Lizard Island Research Station

On the 11th of September my family and I arrived on Lizard Island. To get to the Island we flew on a tiny plane which could only fit 12 people on board. You could also see the captain flying it! 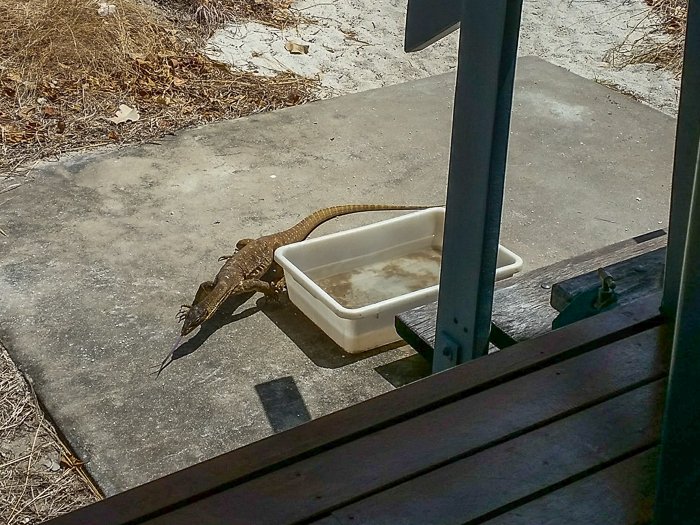 A monitor lizard near our front stairs. They never bite people (unless you try to touch them) and usually move away when they see you. © Eve Banyer

The drive took us to our house that we would be staying in. It was called Kirby. There were three rooms and our family shared the one in the middle. There was a set of two bunk beds it was a very simple room and in the corner there was a cupboard in which we stored our clothes, wetsuits and snorkels. 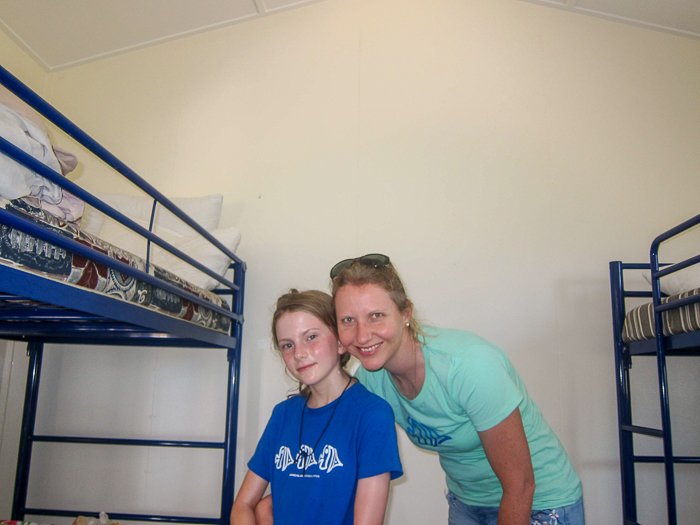 Me with my mum Greer in our room with bunk beds.

Soon after we had settled in we went straight for a snorkel. When we got down there there seemed to be some commotion. That’s when a guy told us that there was a turtle in the water. We got in as quickly as possible and sure enough there was sea turtle, and so close to the shore! It was obviously here for the blanket of sea grass that covered the sea floor. But then we realised something else, there was not one turtle, not two, not even three, but four!! 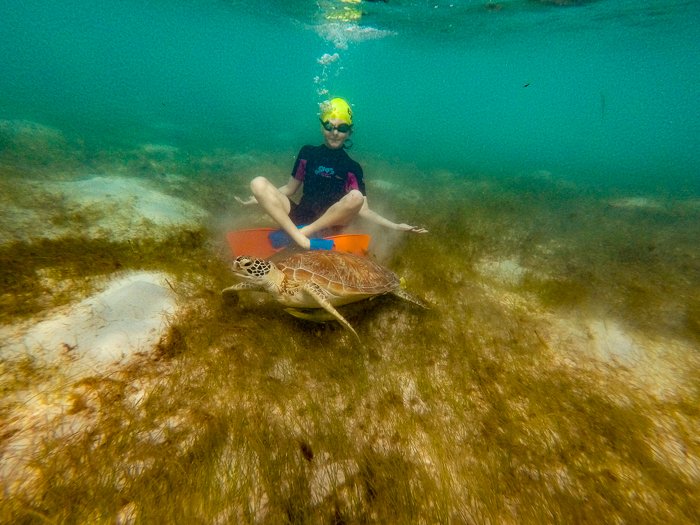 I just dropped in behind this turtle. 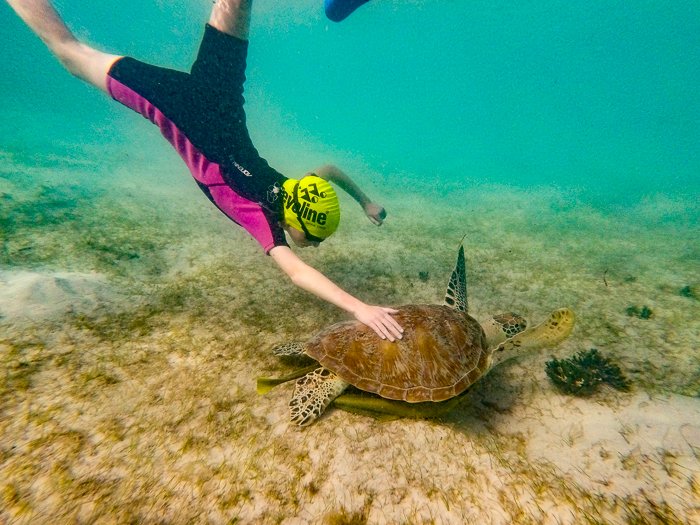 I will remember this moment forever. 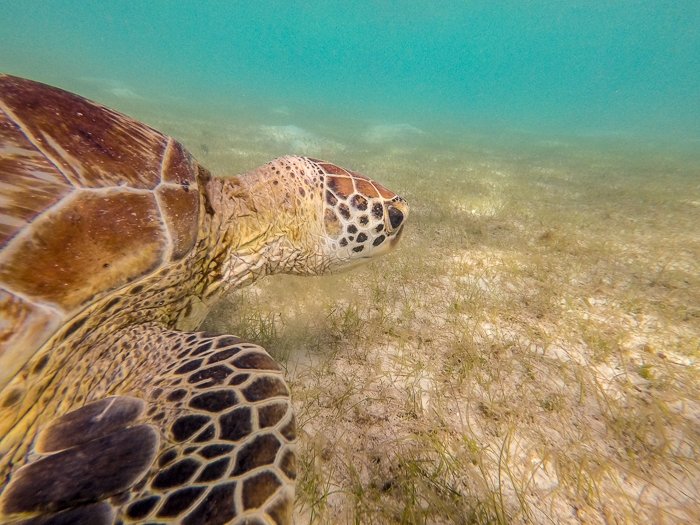 The next day we went snorkeling…

But this time instead of going just off the shore we took one of the research station’s boats called Macquarie 1. We went out to a part of the reef that had not been damaged by the cyclone that had hit a while ago. The reef was crowded with marine life and we even saw another turtle but this time it was resting instead of feeding on seagrass.

On day three we went to a part of the reef that was unprotected it was clearly more damaged than the reef we had seen the day before. There was a current so we didn’t have to swim too much. The current just carried us along the reef. 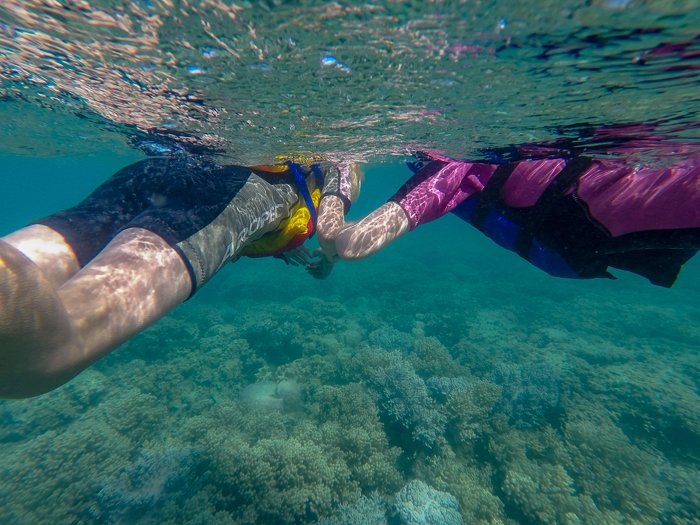 Floating with the current.

That night we had had dinner with scientists who went out at night to sample the water so that they could test the water’s chemistry. This way they can predict if the coral is going to bleach or not. We also met with a group studying the Aboriginal history of Lizard Island and heard about their amazing discoveries.

On our last day on Lizard Island and we decided to take the boat out again for our last snorkel. This part of the reef was reasonably healthy. There were lots of Linckia (a type of bright blue starfish!). We also saw a white tip reef shark! Later on my mum saw a cuttlefish. Cuttlefish can change colour and texture to adapt and camouflage into their surroundings.

Later that day we said goodbye to our friends on Lizard Island and took the plane back to Cairns. 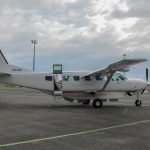 I learned that our reef as we know it, is ever changing. Global warming is gradually eating away at this fragile ecosystem, this wonder of the world, a hidden universe. People are becoming careless and if we keep doing what we’re doing the reef will disappear altogether. And once it’s gone, there’s no turning back. This problem won’t solve itself, in fact it’s intensifying. We committed this crime, and do you know who it’s up to solve it? 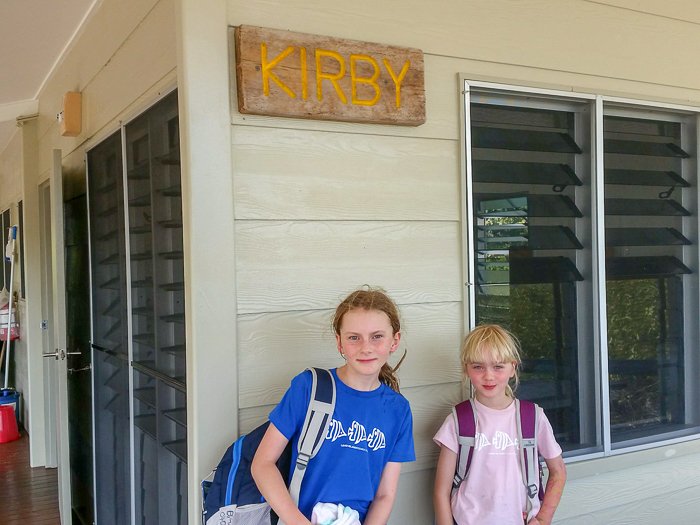 Me with my sister Erin outside Kirby House.

NOTE: Eve Banyer is 11 years old.  Her mother Greer is a LIRRF Trustee. The Banyer family were visiting with some other Trustees.  In periods when the accommodation is not fully occupied by scientists it is sometimes possible for groups of LIRRF and Australian Museum Members to stay at the Station for a few days.  And the Lizard Island Resort offers a special 20% discount for LIRRF Members  – Ed.