We’ve previously written about research conducted in the waters around Lizard Island on Mantis Shrimps, a group of marine crustaceans called stomatopods.  In fact over the past 3 decades there has been extensive sampling of stomatopods in the Lizard region providing a good baseline of species richness.  The Lizard Island Field Guide currently documents 28 of the 39 known species in the area.  Some of these studies have focussed on the unique visual systems and acute sensors these animals possess, with research inspiring the refinement of medical imaging and sensor design.

Biologist Megan Porter has also been studying Mantis Shrimp found around Lizard, her work focussing on measuring biodiversity in order to identify and prioritize marine areas for conservation.  In a paper recently published in Nature, Megan reveals of the 20 species collected as adults, 18 species were identified from larval sampling, highlighting the use of larval barcoding as a more efficient and cost effective way of studying species richness.   In the following “behind the paper” post written by Megan’s grad student, Sitara Palecanda, we learn how they went about their work and how genetic tools are increasing allowing scientists to go small to think big.   Ed.

Measuring the health of an ecosystem can be tricky. One of the best indicators of ecosystem resilience, however, is established by the diversity of species that live there. The term ‘biodiversity’ is generally used to describe this biological menagerie, though it may refer to several different scales of measure, such as how different genes are among individuals of a species, the number of species within an ecosystem, or even differences in species composition between ecosystems. In the current age of human-induced climate change, being able to monitor ecosystem diversity is as important to conservation as a thermometer is for monitoring human health. Our recent paper documents a new method for monitoring biodiversity in an environment that is as important to human survival as it is inhospitable to human life: the ocean. Attempting to quantify biodiversity in vast ocean environments is a task almost as huge and intimidating as the ocean itself. As overwhelming as quantifying marine biodiversity can be, we need adequate ways to monitor species diversity so we can implement conservation strategies when the health or resilience of an environment is threatened. But, in this age of rapidly shifting climate, how do we quickly and accurately measure something so large? Our answer was to go small, focus on the plankton, and let the ocean’s biodiversity come to us. 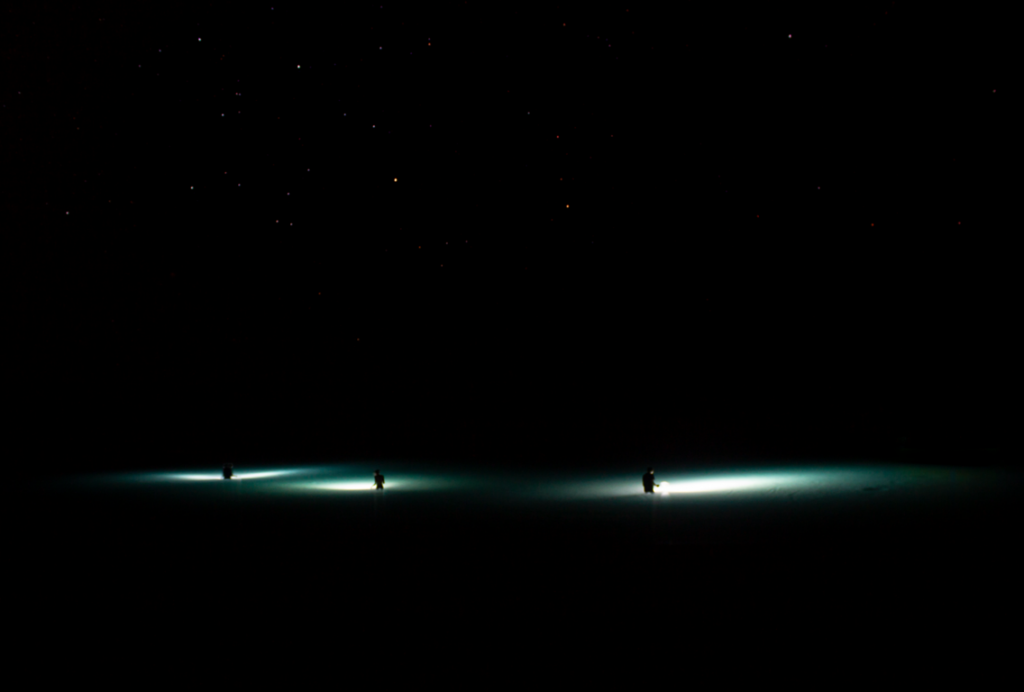 Every night, the greatest migration on the planet takes place as zooplankton rise to the surface.  Zooplankton, defined literally as animal drifters or wanderers, comprise a diverse sampling of species ranging from small, single-celled protozoans up to shrimp, jellyfish, and the larvae of many bottom-dwelling species, like mantis shrimp. We chose to focus our study on mantis shrimp larvae since our field site, the Lizard Island Reef Platform, is an established site for mantis shrimp diversity, with 32 currently documented adult species collected from the surrounding reef habitats. Since sampling adults from the bottom of the ocean is arduous at worst and tediously time-consuming at best, we wanted to use mantis shrimp larvae to test our hypothesis that marine biodiversity can be monitored from the plankton.

With the stars of the southern cross hanging in the sky, we waded into the pitch black water with a dive light and, like moths to a flame, summoned the zooplankton to our nets. Each scoop of the net brings tiny animals each more mysterious than the next, including swarms of larvae that bear little resemblance to the adults they will become. On shore, we plucked mantis shrimp larvae from the seething soup of zooplankton and got to work sequencing their DNA. Unlike early scientists who classified larvae as completely different species than their adult forms, we are now able to take advantage of genetic tools that link larval forms to a particular species designation, a detail required for creating an adequate catalog of biodiversity. 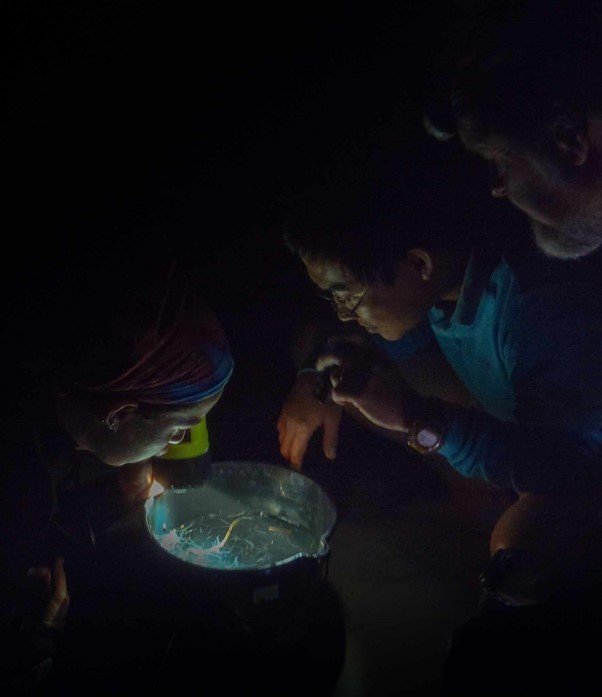 After collecting a sample of all of the light-attracted plankton, back on shore researchers must locate mantis shrimp larvae in the ‘seething soup’ of animals that end up in the bucket. Photo credit: Megan Porter

We were excited to see that with just a few isolated sampling events, our larval genetic results yielded species that matched the record of adult mantis shrimp species, which took over 30 years of sampling at Lizard Island to document. We concluded from this study that sampling from the plankton can be an accurate method to quickly catalog biodiversity. Though this worked really well for mantis shrimp, this method won’t be available as a bona-fide biodiversity check until we test it in other groups of plankton. All members of the scientific community are invited to help us test this method more broadly!

Our experience at Lizard Island, gave us a firsthand view of the negative impact ocean warming can have on coral reef ecosystems. In 2016 the Lizard Island reef platform was hit by multiple cyclones and a devastating bleaching event. By developing newer, faster methods for quantifying biodiversity we can quickly identify marine areas of high conservation priority. This method may provide us with a new metric for measuring the health of an ecosystem; a kind of thermometer where a high number is a very good thing. 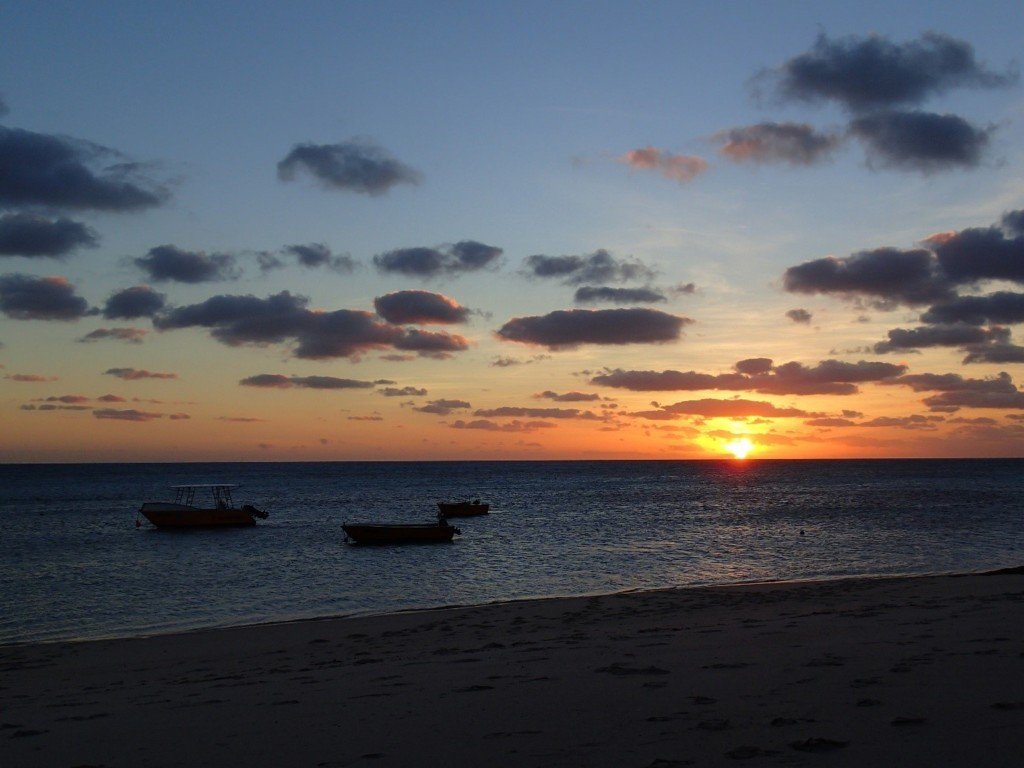 The view from the beach while waiting for the sun to go down. Photo credit: Megan Porter

Thank you to the staff of the Lizard Island Research Station for making this fieldwork possible. We are very grateful to Megan Porter for her contributions to this post.