You are here: Home / Posts / Microplastics and DEHP in coral reef fish 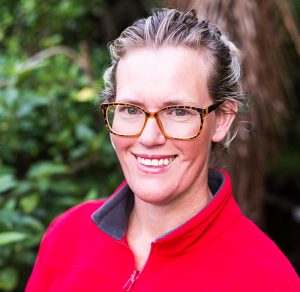 Marine life is detrimentally affected by human pollution; including by plastic waste and greenhouse gas emissions that cause ocean warming.  Thanks to a LIRRF Fellowship grant, I was recently able to undertake further research on these effects, yielding additional data and samples for the projects outlined below and in my March 2019 post.

Microplastics are particles 5mm or smaller. Some are manufactured to that specification for use in products such as sunscreens, toothpaste and cosmetics. Others are formed from the breakdown of larger plastics. Sadly, they are now widespread in aquatic ecosystem, including in the once-pristine waters of the Great Barrier Reef. They are harmful to fish and other marine organisms that are not able to distinguish them from planktonic food.

Diethylhexyl phthalate (DEHP) is a ‘plasticizer’ additive that makes plastic flexible. It is used in the manufacture of a wide range of polyvinyl chloride (PVC) products, including some water bottles, shower curtains, medical devices, building materials, clothing and children’s toys.

Flexibility is a benefit, but DEHP has other attributes that are highly undesirable. It leaches out of its host plastic and becomes a ubiquitous environmental pollutant. If ingested, it can disrupt the endocrine system that regulates messenger hormones in humans and other animals. It is particularly disruptive of reproductive hormones.  Products that contain more than 1% DEHP are banned in Australia.

The field research we completed in December 2019 at the Lizard Island Research Station provided data and tissue samples relevant to several areas of concern with microplastics, including the extent to which the presence of DEHP makes them more harmful.  We are currently analysing the data and samples in our laboratories at the University of Otago (UoO) in Dunedin NZ. 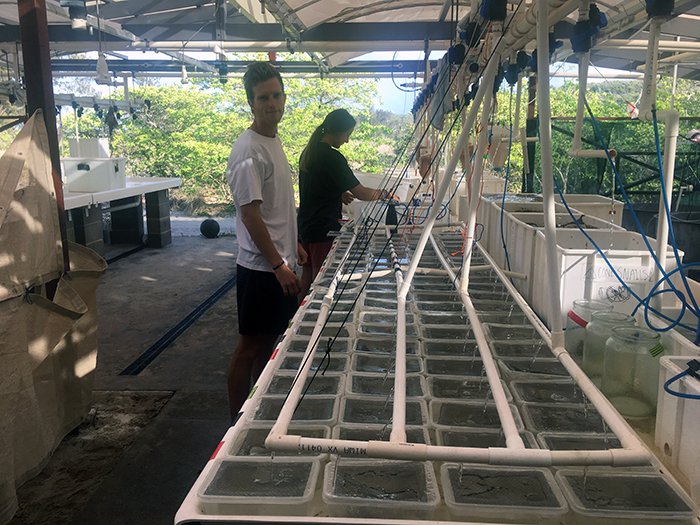 Our four ongoing projects are:

2  Does exposure to DEHP-dosed microplastics increase predation rates?  For this study, P amboinensis were exposed to DEHP-dosed microplastics.  Wild-caught dottybacks (Pseudochromis fuscus) were introduced as predator fish.  Preliminary results suggest there is no difference in predation rate due to such microplastic exposure.  However, we also collected white muscle samples at LI and froze them in nitrogen for analysis at UoO. It could be that the effects of microplastic pollution manifest physiologically rather than behaviourally.

3  The effect of exposure to DEHP-dosed microplastics on gonad morphology and oxidative stress in the starry goby Asteropteryx semipunctatus.   We collected tissue samples at LI for analysis at UoO. The gonads are being examined for changes in structural morphology.  White muscle are undergoing oxidative analysis. Livers are being examined for an increase in lipid peroxide which is indicative of toxic loading. This research is part of a comparative study in at the UoO whereby exposure to DEHP-dosed microplastics significantly altered gonad morphology and caused an activation of oxidative stress pathways indicative of toxic loading in the NZ triplefin fish.

4  The combined effects of chemical alarm cues and microplastics on the heat shock protein and oxidative stress response of P amboinensis.  Chemical cues are released by prey fish on disruption of their epidermis skin layer.  These cues are sensed by the olfactory organs of other fish, informing them of risk and predation. Here, we wanted to know whether there would be an interaction between exposure to microplastics and chemical alarm cues and whether this would manifest as a change in morphology and an increase in the expression of heat shock proteins and oxidative stress pathways  The morphology data and white muscle samples we obtained are now being analysed at UoO. 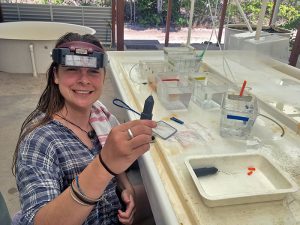 This research will increase knowledge of the toxic effects of microplastic pollution on the behaviour and physiology of coral reef fishes.  It will also inform regulation of such contaminants in aquatic environments. Maintenance of robust fish populations is important for the health of coral reefs, and for people who depend on fish for food and financial security.

I would like to extend my thanks and gratitude to LIRRF and the John & Laurine Proud Foundation for funding my Fellowship grant, and to the Lizard Island Research Station for its facilities and logistical support. 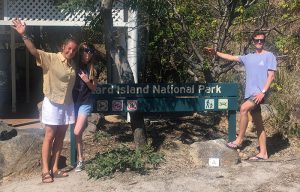 This Fellowship also allowed me to bring three UoO postgraduate students to work with me at the Station, where they experienced an entirely new marine research environment and made long-lasting connections with researchers from all over the world. Because of their research contribution, our results exceeded the scope and objectives set out in my Fellowship application.

[Dr Bridie Allan is a researcher and lecturer at the University of Otago, and a collaborator at Fishlarvae.org.  This post is based on her final Fellowship Report. Ed]