You are here: Home / Posts / Impact of ocean acidification on fishes

Ph.D. student Kelly Hannan is undertaking research into the impact of ocean acidification on fishes under the supervision of Associate Professor Jodie Rummer (James Cook University). The fieldwork for her research has been supported by a Lizard Island Reef Research Foundation (LIRRF) doctoral fellowship. 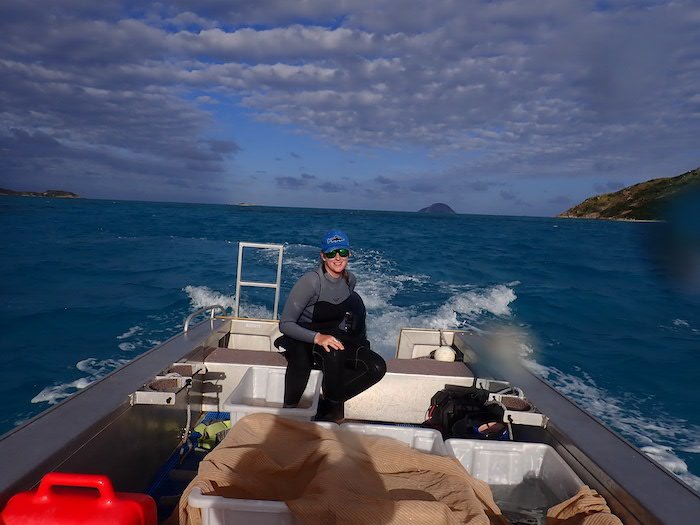 That support funded a field trip to the Lizard Island Research Station in 2019 to examine the impact of ocean acidification on the swimming performance and oxygen uptake rates of fishes. Kelley’s research is particularly pertinent, given the negative impacts of ocean acidification on marine organisms over the course of this century. Ocean acidification describes the increasing levels of carbon dioxide being absorbed by the oceans from the Earth’s atmosphere. When carbon dioxide (CO2) is absorbed by seawater, chemical reactions occur that reduce seawater pH. Understanding how fishes will be affected by ocean acidification is fundamental to protecting future coral reef fish community structure and ecosystem health on the whole.

Carbon dioxide concentration in seawater is measured using partial pressures of carbon dioxide (pCO2) and this has a natural daily cycle due to the respiration and photosynthesis cycles of organisms living on coral reefs. Preliminary data collected at LIRS confirms that the reefs around Lizard Island do experience this natural fluctuation of pCO2.

Although we know these day/night fluctuations in pCO2 exist, long-term predictions have typically been based on stable, open-ocean conditions, and fluctuations have largely been omitted from the analysis of ocean acidification impacts. In the future, not only is the average pCO2 expected to increase, but these natural fluctuations can also increase by up to ten-fold. The increased variation in pCO2 could have negative impacts on marine organisms if they cannot adapt to function across a wide range of pCO2.

Kelly’s study examines the characteristics of fishes that make them better equipped to perform under future ocean acidification conditions, as this can greatly affect future fish communities and ecosystem health.

The study focuses on how four different fish species (fusilier: Caesio cuning, snapper: Lutjanus fulviflamma, damselfish: Abudefduf whitleyi, and cardinalfish: Cheilodipterus quinquelineatus) are  affected by exposure to elevated pCO2 levels, taking into account the impact of expected day/night fluctuations. Trials on the four fish species were performed both during the day and at night because fish behaviour differs based on time of day. The trials for the four different fish species were carried out over between 9 and 11 days.

The fish species were subjected to three different treatments for 9 to 11 days prior to swimming trials: 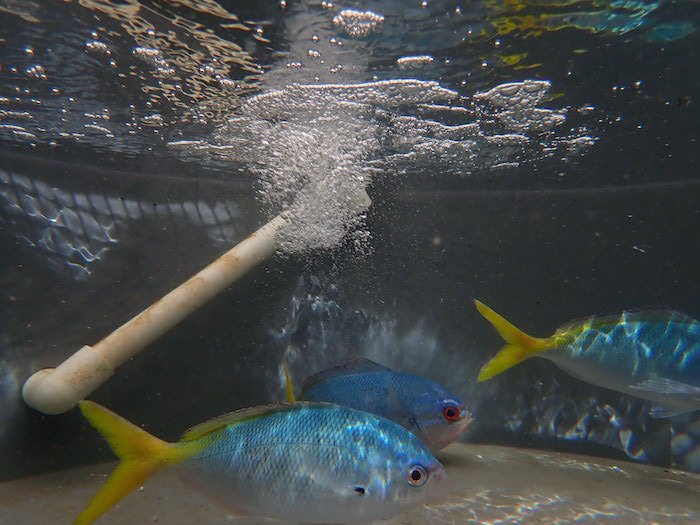 Yellowtail Fusiliers being exposed to environments with strictly controlled acidification levels before being subjected to performance measurement. Credit: Kelly Hannan. 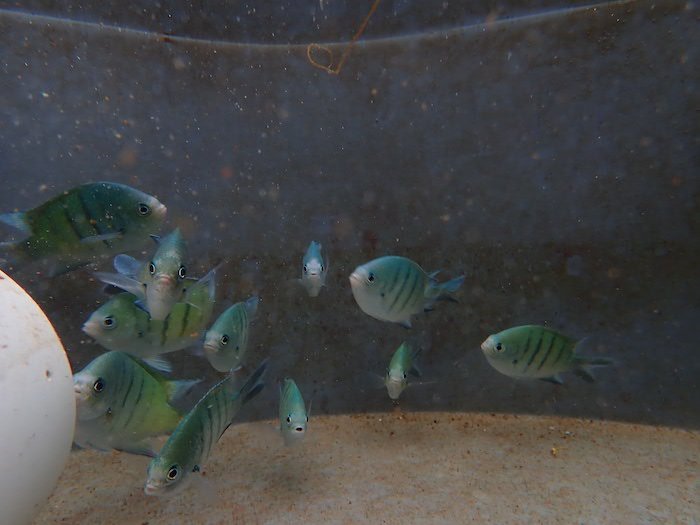 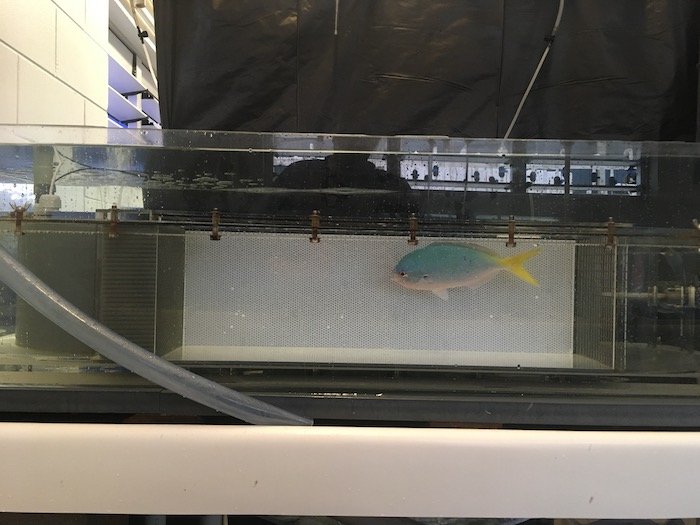 A Yellowtail Fusilier looking a little over the exertion being demanded. Credit: Kelly Hannan.

A Fiveline Cardinalfish looking calm and confident while being tested. Credit: Kelly Hannan.

The fusilier, snapper, and damselfish all swam faster and had higher maximum oxygen uptake rates, representing greater amounts of available energy,  in environments of fluctuating pCO2. In contrast, the cardinalfishes did not exhibit a difference in swimming speed between ambient and fluctuating pCO2 and their available energy was decreased in environments with fluctuating pCO2 levels. This suggests that cardinalfishes could be more adversely affected by climate change conditions in the future, and in particular, increased ocean acidification.

It is important to note that the cardinalfish was the only nocturnal species measured; whereas, fusilier and damselfish are diurnal species, and snapper are opportunistic (both day and night) feeders. This may suggest that nocturnal species will be more sensitive to climate change conditions; however, given that only one nocturnal species was measured here, more research needs to be done.

Based on a research report by Kelly Hannan
James Cook University