You are here: Home / Posts / Hiding in plain sight: The Dusky Dottyback 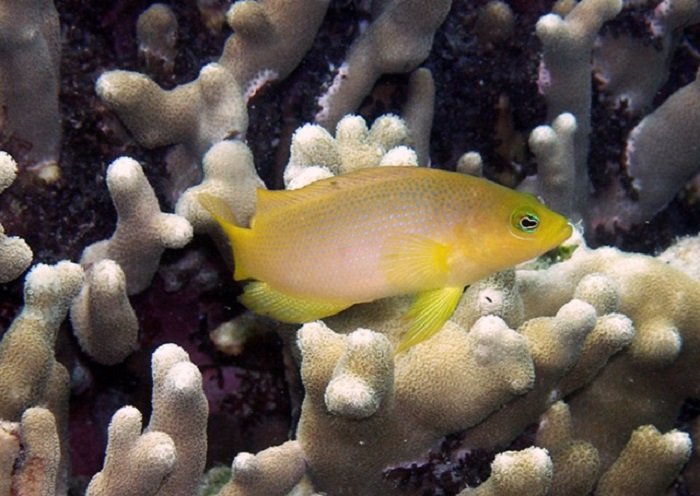 This deception and camouflage is called phenotypic plasticity. It is typically executed as an almost-perfect mimicry of several model fish species rather than a perfect mimicry of just one. This enables mimics to deceive target species by using multiple facades.

Fabio Cortesi and other scientists studied the phenotypic plasticity of dottybacks at the Australian Museum’s Lizard Island Research Station. They established artificial reefs made of coral rubble (brown) and live coral (yellow), and filled each with either brown or yellow damselfish. They then introduced either a brown or yellow dottyback. After two weeks, the brown dottybacks on reefs with yellow damselfish had turned yellow, and vice-versa. This change occurred regardless of habitat, indicating that it was being driven by the colour of the damselfish rather then the colour of the reef.

By deploying this tactic, dottybacks achieve multiple benefits, including increased success in preying on damselfish and reduced vulnerability to being preyed upon by coral trout. The published research is available here. Further information is also available on The Conversation.

Fabio was awarded the 2013 Lizard Island Doctoral Fellowship, funded by LIRRF. He discusses his dottyback research in this video produced by Alex Vail, who grew up on Lizard Island:

Although this type of mimicry has been suggested in other species, this study is the first to quantitatively prove it. Fabio Cortesi is currently undertaking his PhD in the mimicry systems of coral reef fish for the University of Queensland. He has completed Bachelor degrees in Marine Biology at both UQ and The University of Basel, Switzerland.