You are here: Home / Posts / Going to the LIMIT on Lizard Island: the impact of ecological disturbance on coral reef metabolism

Lizard Island is one of the few sites in the world where a long-term historical study of coral reef metabolism can be conducted. Historical measurements of reef photosynthesis and calcification date back to 1975 when the Lizard Island Metabolic Exchange on Reefs (LIMER) expedition first measured reef metabolism by following dye patches released into the water. Today there is a rich history of ecological, biogeochemical, and metabolic performance measurements at the South Island Reef Flat site that the LIMER team of international collaborators visited 45 years ago.

Coral reefs are among the most productive ecosystems on earth and are known for their high rates of photosynthesis and calcification. Reefs feed millions of people worldwide, provide coastal protection, and support more biodiversity than any other known marine ecosystem. These goods and services arise directly from two dominant processes: (1) Net Ecosystem Production (NEP), or the balance between photosynthesis and respiration; and (2) Net Ecosystem Calcification (NEC), or the balance between calcium carbonate precipitation and dissolution.

Collectively these processes are known as ecosystem metabolism and they underpin the most important ecosystem functions of a coral reef. In particular, ecosystem calcification is indicative of a reef’s capacity to build calcium carbonate framework, providing habitat for almost 30% of all marine species.

A LIRRF Fellowship served as an initial source of funding to bring together a diverse and international team of researchers in October of 2018 to measure the metabolism of the South Island Reef Flat. Partly inspired by the 1975 LIMER project, the new expedition was named the Lizard Island Metabolism In Transition (LIMIT). The primary objective of the LIMIT project is to document the recovery trajectory of coral reef metabolic performance following acute disturbance events such as storms and bleaching.

This newly collected metabolic data is being used to track the recovery of the reef flat since the 2016/2017 bleaching events. The data will also help to determine what it takes to draw a baseline of ecosystem metabolism for future studies to make comparisons to. Coral reef metabolism is very dynamic, driven by day to day changes in sunlight and seasonal changes in both temperature and sunlight. To make proper comparisons between different years, reef metabolism data needs to be standardised to the amount of light reaching the reef on any given day.

We returned in October of 2019 to continue documenting the recovery of coral reef metabolism with one of our central goals to conduct the measurements the same way as the LIMER team had in 1975. This involved following a water mass across the reef flat using a floating drogue and dye patch (see Fig. below). 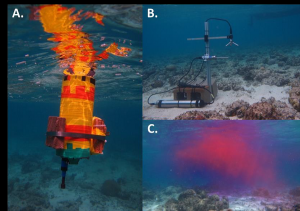 We built upon the 1975 methods by updating our floating drogue with autonomous oxygen and pH sensors, allowing us to get near continuous data. We also released dye across the reef to determine the lateral dispersal of water masses  transiting the reef flat. A state-of-the-art eddy covariance system was also deployed to measure high resolution net ecosystem production rates based on oxygen.

While it is still in its initial stages, the data indicates reef metabolism may recover differently than other ecological based metrics. Calcification rates are generally thought to be linked to coral cover, but we are finding that calcification is recovering quickly while coral cover remains low compared to previous years. This may be due to different calcium carbonate producing organisms or even small coral recruits calcifying at high rates. We plan to conduct more research on Lizard Island to better understand this phenomenon.

The LIRRF Fellowship was made possible through the generous contributions of the Yulgilbar Foundation and has been a catalysing force to foster the collaborations necessary to conduct this interdisciplinary and extensive study.