Newly settled crown-of-thorns starfish (Acanthaster cf. solaris, aka CoTS) have rarely been studied in the field. This knowledge gap in our understanding of CoTS population and outbreak dynamics has been my research focus for the past several years. My interest developed when I worked for two years on GBRMPA’s CoTS control program, where I taught myself how to track down this tiny cryptic life stage. 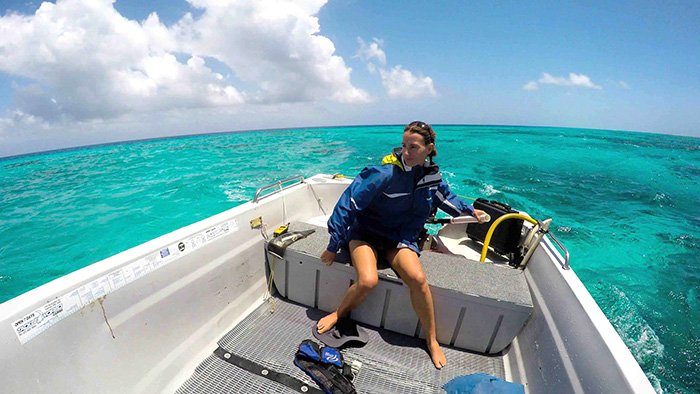 Me (Jennifer Wilmes) working on the Reef. © Daniel J Schultz

I am studying temporal and spatial variability in the occurrence and densities of newly settled CoTS; post-settlement growth and survivorship across different habitats and marine park zones; and whether quantifying densities of settlement-stage CoTS can be used to predict the incidence of outbreaks. 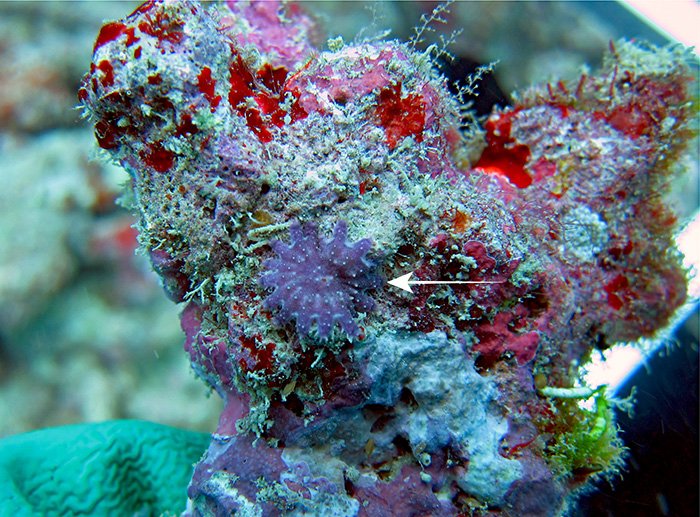 Example of a newly settled CoTS (diameter 11mm) associated with coral rubble and feeding on crustose coralline algae. At this stage of development, newly settled individuals are pink or purple, perfectly camouflaged against the algae they are feeding on. © Jennifer Wilmes

In 2015, my partner Daniel Schultz and I detected, measured and sampled over 3,500 newly settled CoTS across 64 reefs of the GBR. In 2017, we narrowed the search to three mid-shelf reefs located off Townsville in order to characterise their habitat associations. 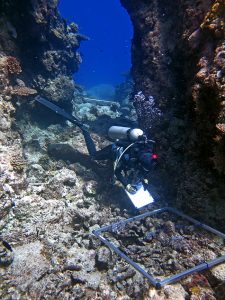 In 2018, we identified one site at each of five Townsville reefs where there were elevated densities of settlement-stage CoTS. As a team of 4 observers (mostly Daniel, Deborah Burn, Vanessa Messmer and myself), we surveyed 60 quadrats at each one of these five sites in June and November of 2018 and 2019. We laid additional transects to survey local coral cover and composition, as well as size and structure of the adult CoTS population.

In 2019, I fell pregnant with our son Jacob, and was grateful to have my colleague Deborah assist with searches for newly settled CoTS and the expansion of the study area to Lizard Island and nearby reefs.

At each survey site we recorded for each quadrat the count of juveniles (diameter <150mm), depth, slope angle and habitat complexity. All juvenile CoTS were measured to the nearest mm and their diet and microhabitat were recorded (i.e., dead coral substratum encrusted with coralline algae versus live coral). Local coral cover and composition were also assessed at each site and all starfish within 1m on either side of four transects were counted and measured to provide a basis for an estimate of the size and structure of the local starfish population. 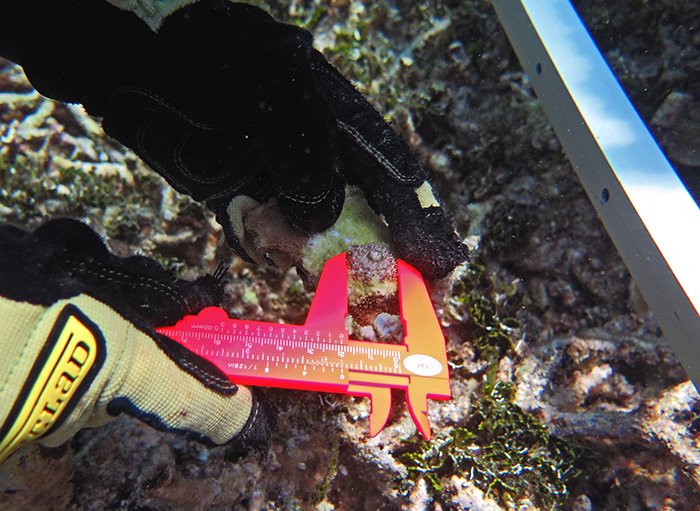 Measuring the diameter of a juvenile CoTS feeding on Montipora spp. coral. At this stage of development, the body colour has changed and the spines are prominent. Photo credit: Vanessa Messmer

My research has so far highlighted the importance of the early juvenile growth phase to CoTS population dynamics, and we have identified areas where settlement-stage CoTS occur more frequently. We found that their relative abundance peaks in obliquely exposed south-western and north-eastern fore reef habitats, at intermediate depths of 8-14 m, where there is a high availability of coral rubble.

We were still detecting newly settled CoTS in 2019 in the sites off Townsville, but at lower densities compared to when we first began sampling these sites in 2018. Newly settled starfish have not been detected at Lizard Island and nearby reefs. This is the zone where primary outbreaks are thought to originate before moving south. We are now in the process of analysing our data and publishing the results.

I am very thankful for the help that I have received from many amazing people to conduct this research, in particular Daniel Schultz, my supervisors (Morgan Pratchett, Andrew Hoey and Vanessa Messmer) and my colleagues (Deborah Burn, Alexander Buck, Alexandre Siqueira Correa and Cassandra Thompson). Lastly, I am also extremely grateful for the financial support received from the Australian Museum’s Lizard Island Research Station and The Ian Potter Foundation through LIRRF. I look forward to continuing and expanding this research.