You are here: Home / Posts / Early detection of CoTS outbreaks

Early detection of population outbreaks in Crown of Thorns Starfish (Acanthaster solaris cf, aka CoTS) is a necessary precursor to containment. Excellent progress has been made over the past few years, especially in the deployment of DNA technology.  The five research projects outlined below have been funded by The Ian Potter Foundation 50th Anniversary Commemorative Grant through LIRRF.

Research in 2016 and 2017 established it is possible to determine the presence and density of local CoTS populations by analysing environmental DNA (eDNA = microscopic fragments of genetic material found in plankton and water samples).  The highly accurate methodology developed at AIMS is regarded as the Gold Standard for CoTS eDNA detection.

The Gold Standard requires a water sample of 2-3 litres and analysis using sophisticated lab equipment.  Accordingly, it can’t be deployed cost-effectively at remote reef locations or by non-scientists. 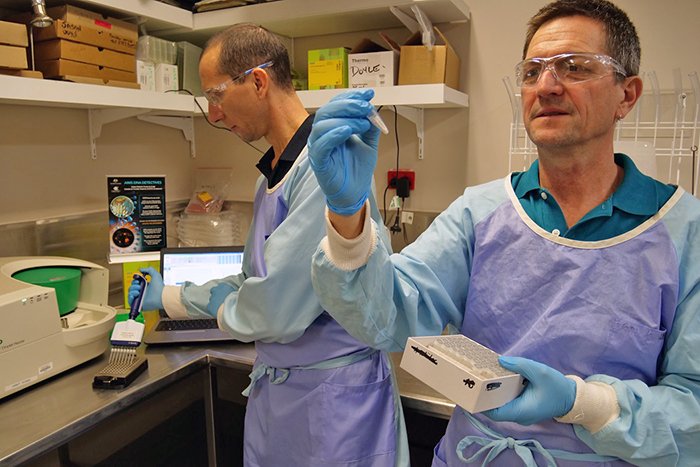 Their initial results show further improvement is required in sample collection and dipstick sensitivity.  The accuracy of similar ‘dipstick’ devices has been greatly improved in human medical and other biological applications. It is highly likely similar improvements will be achieved for in situ detection of CoTS eDNA. This exciting research is continuing at AIMS.

Larval CoTS form part of the plankton in the Reef lagoon.  Microscopic (<1mm) and almost transparent, they are hard to detect through visual observation.  To overcome this difficulty, Dr. Vanessa Messmer and her colleagues deployed 193 settlement traps at various reef locations, including around Lizard Island. In the period from January 2017 to February 2020 they found 124 (64%) of these traps contained CoTS DNA. However, the results showed only presence of absence, with no quantification of the number of larval CoTS in each “present” location. 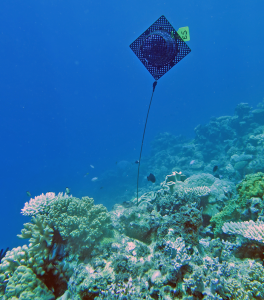 The most recent phase of this project sought to estimate how many individual CoTS juveniles contributed DNA to the water sample taken from each trap, using digital droplet Polymerase Chain Reaction (ddPCR) methodology.

The research team was able to derive a relative comparison of CoTS settlers across spatial and temporal scales, and to further validate the utility of the traps for sampling juvenile settlement rates. It also found its DNA extraction procedures will need to be further improved and a range of control parameters will need to be established to enable estimation of the number of individual CoTS in each trap. This is important progress.

This survey project led by Professors Morgan Pratchett and Andrew Hoey was designed to close a knowledge gap relating to CoTS in non-outbreak periods. This gap exists because most studies have been initiated only after population densities reached outbreak levels, and because many previous study methods are less effective in low densities.

The survey was conducted by divers on SCUBA, using submarine scooters to substantially increase the areas they were able to cover. Overall, they surveyed close to 70km2 of reef habitat and recorded 91 CoTS or definitive CoTS feeding scars, indicating a population density 1.32 CoTS per km2. 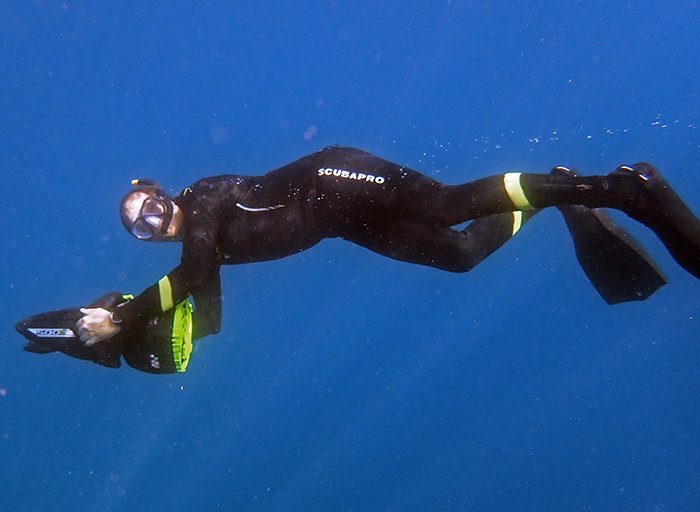 Both manta tow surveys and the RangerBOT being developed by QUT have difficulty detecting CoTS that are less than 30% exposed to a downward-facing view. Scooters proved superior to manta tows, because the divers were more readily able to stop and search complex reef habitats where CoTS feeding scars were observed.   The scooter survey data indicates that only 12% of CoTS have a 30%+ exposure from above. Some feed from underneath the coral formations and are totally invisible from above.

The survey also gathered data on the time of spawning and whether or not females group together then to maximise their reproductive success.

Broad-scale implementation of this survey method will be conducted over coming years.  It will quantify changes in distribution and abundance of CoTS in the leadup to the next population outbreak, expected in 2025, and will provide an unprecedented opportunity to identify the causes of such outbreaks.

Jennifer Wilmes is a PhD candidate at JCU.  She has been surveying newly-settled CoTS for the past 3 years. Last year she expanded her study area to Lizard Island.  Her research shows the importance of monitoring the numbers, location and survival rate of newly-settled CoTS in early detection of population outbreaks.

It also identifies habitats where newly-settled CoTS occur most frequently.  So far, it has not detected any at Lizard and nearby reefs where outbreaks are thought to initiate.  This information is proving very valuable in guiding other survey work, and in advancing understanding of the immediate causes of population irruptions. See more and some great pics in Finding baby CoTS.

Prevention of the initial build-up of CoTS populations in the Reef lagoon between Cairns and Cooktown will be fundamental in the containment of future outbreaks (Pratchett et al 2018).  A research team from JCU and AIMS led by Prof. Pratchett and Dr. Sven Uthicke has been awarded a further grant funded by The Ian Potter Foundation.  It will use a full suite of complementary methods to detect and track of all life-stages of CoTS in the “initiation box” – the sector of the Reef where outbreaks are thought to begin.   The data will establish the processes and patterns of irruption initiation and validate the utility of the different sampling methods employed.

The scientists involved in these projects have have all expressed thanks and appreciation to LIRRF donors, The Ian Potter Foundation and the Australian Museum’s Lizard Island Research Station for their support of this important work.  Their research findings will be published in scientific journals.