You are here: Home / Posts / Death by bleaching

Sea temperatures around Lizard Island and elsewhere in the northern sector of the Great Barrier Reef were one or two degrees above normal for several weeks in March 2016, but started to cool off in April.   See BOM Anomaly Forecast.

Coral tolerates short-term variations.  However, when elevated sea temperatures continue for a week or more, coral polyps expel the symbiotic algae that provide colour and an important part of their nutrition. This is referred to as ‘bleaching’.  The biology is explained here and at CoralWatch.

Dr Lyle Vail, co-director of the The Australian Museum’s Lizard Island Research Station, agrees that this is the worst coral bleaching event in the Lizard Island lagoon since 2002.  The elevated temperature is associated with a ‘perfect storm’ of factors, including global climate change (see the timeline map of sea surface temperature provided by NASA), a strong El Niño and a local summer of unusually hot days, calm seas and clear skies.

The following two photos show the extent of bleaching at Loomis Reef in the period from November 2015 to March 2016. 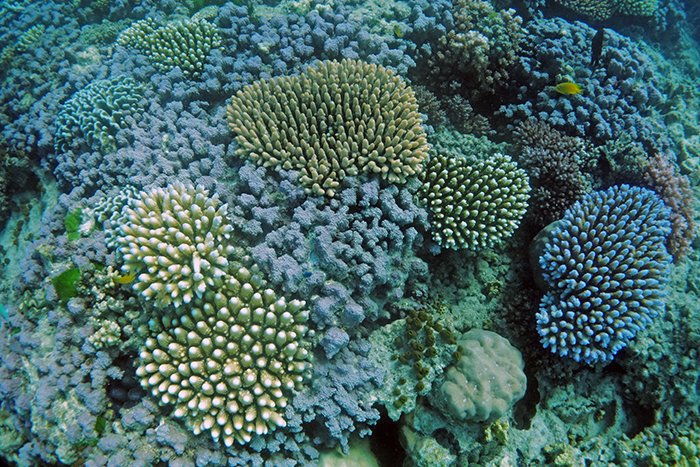 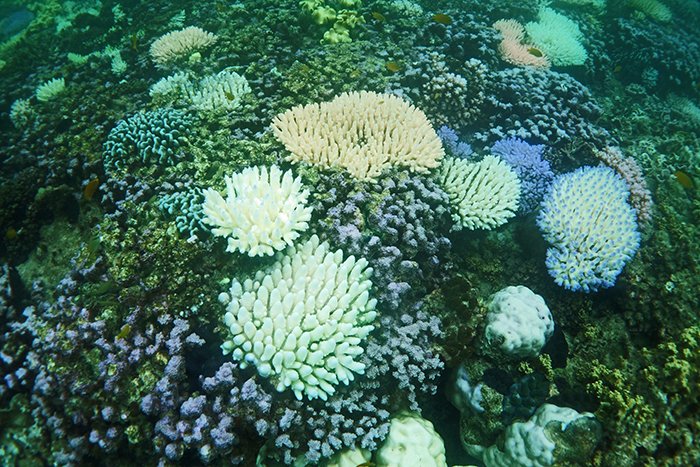 An aerial survey of the northern Great Barrier Reef led by Professor Terry Hughes has shown that 95 per cent of the reefs are now severely bleached — far worse than previously thought. See ABC News and iView video.

As the sea temperature cools heading into the winter months, some bleached corals may recover their algae.  Those that survive are likely to have diminished reproductive capacity. Those that die will create a habitat that for most other species will be vastly inferior to that of a living coral reef.

The following time-lapse video was made by the XL Catlin Seaview Survey.  (Click on the image and move your cursor to see in different directions while it plays):

When coral bleaches, countless other species that depend on coral reefs for food and shelter are also impacted.  Widespread loss of coral has massive implications for biodiversity, fishing and tourism. See CoralWatch, AIMS, GRMPA and BOM

Although coral is fragile in its sensitivity to temperature and pollution, it also has a remarkable persistence over geological time.  As noted in our posts on paleo reefs here and here, coral has been present on earth for hundreds of millions of years.  However, there have been long periods which left no geological trace of coral and many species have become extinct.  If we want to leave a world that preserves the Great Barrier Reef for our grandchildren and great-grandchildren, we should be doing everything possible to reduce greenhouse gases and coastal pollution.

Even though the late summer of 2016 is one of the worst bleaching events in living memory, the waters around Lizard Island continue to provide abundant opportunities for scientific research and a beautiful natural wonderland for other visitors.  The rate of bleaching is tapering off with the arrival of cooler temperatures in April and some of the less-stressed coral is starting to recover.  Go there or revisit as soon as you can to witness this compelling testimony on the effect of global warming. 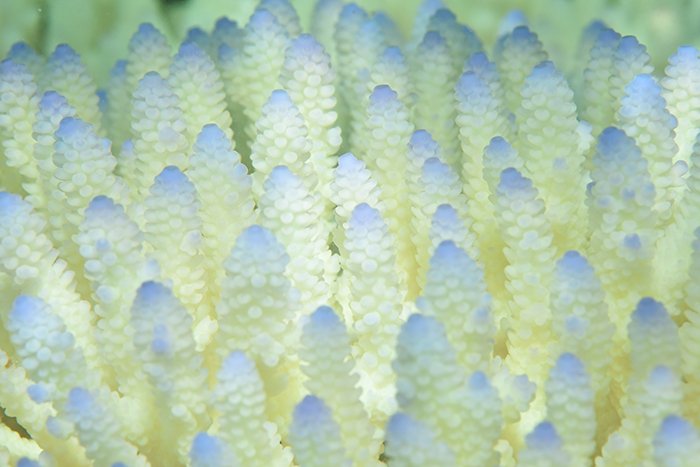 This newly-bleached coral has its own pale sad beauty, but unless it recovers its symbiotic algae soon it will die and go completely white. Photo credit: CoralWatch / Justin Marshall