Research by Dr. Frederieke Kroon and other scientists indicates that pesticides used in sugar farming is affecting barramundi caught in river systems which run through those farming areas, and coral trout caught hundreds of kilometres from the river mouths. (Kroon et al 2015)

Two species of coral trout were used in the study – Plectromomus leopardis and Plectropomus maculatus.  Specimens were collected from the Great Barrier Reef lagoon near each of the four research stations (Lizard, Orpheus, Heron and One Tree) and from near Dunk Island.

Humans and animals, including fish, have complex endocrine systems; glands that secrete hormones (e.g. estrogen) which regulate sexual and reproductive development and other body functions.   Pesticides contain chemicals that can mimic these hormones and disrupt endocrine systems.  See WHO State or the Science of Endocrine Disrupting Chemicals 2012.  (If you are a non-scientist, start with the Summary)

Dr Kroon’s research measured, among other things, the gene transcription levels of liver vitellogenin (vtg) in the coral trout specimens.  Vitellogenin is the precursor of egg-yolk protein in fish.  It is a well-established biomarker of exposure to estrogenic compounds in the environment.  The specimens caught near Orpheus, Heron and One Tree Islands in the central and southern sectors of the GBR lagoon offshore from sugar farming areas were found to have significantly higher levels of vtg (up to four times more) compared to those caught near Lizard Island in the northern sector.  Fish around Lizard Island are more fortunate.  That area is not directly exposed to flood plumes from rivers that run through sugar farming country.

Barramundi, coral trout and many other tropical marine fish are hermaphrodites.  Barramundi first mature into males before changing into females at a later stage. Male coral trout have all been female at an earlier stage in their life cycle.  The effect of exposure to estrogenic compounds such as pesticides on such complex sexuality is unlikely to be neutral.  Further research is required to understand the full ecological implications. 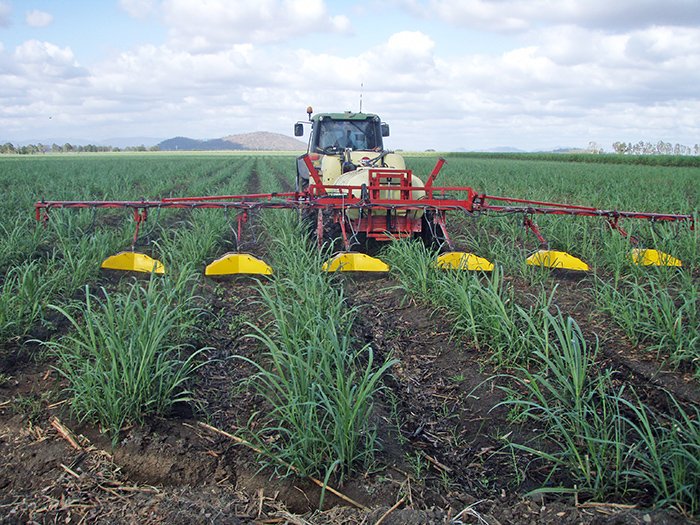 A lot of research has been done in recent years to find ways of mitigating chemical run-off from sugar farms.  For example, in 2013 the CSIRO trialled a technique for more precise application of herbicides, using a specially shielded sprayer.  The trial results showed a reduction of up to 90% in herbicide run-off.  See media release and abstract.  Some growers have adopted such best-practice farming technologies, but their application is still far from universal.  Initiatives like Project Catalyst have been helping.  See also WWF and this video