You are here: Home / Posts / Where will a Lizard Island Fellowship take you?

Open to applicants all over the globe, including outstanding PhD students and early career post-doctoral researchers, Lizard Island Fellowships offer world-class facilities to conduct research that leads to international success.

What fellowships are available?

There are a total of five fellowships available; two doctoral and three postdoctoral.

Postdoctoral Fellowships support early career post-doctoral researchers. They provide financial support for research at the Lizard Island Research Station by scientists whose PhD was awarded within five years of the application date. Fellows make substantial contributions to coral reef science, and are pathways to partnerships, collaborations and larger projects. Available are the Isobel Bennett Marine Biology Fellowship, the John and Laurine Proud Fellowship and the Yulgilbar Foundation Fellowship.

Where can they take you?

LIRRF Fellowships give students and researchers the opportunity to conduct research at Lizard Island’s world class and field-leading facilities. Not only that, but they open the door ton international acclaim for successful applicants.

Lauren Nadler, the 2014 LIRRF Doctoral Fellow, has returned from the Society for Experimental Biology conference in Prague, where she was a finalist for the Young Scientist Award. Lauren’s research focuses on the schooling behavior of coral reef fish. As social groups of fishes that exhibit high levels of synchronicity, schools have an important distinguishing feature: fish in the group maintain alignment with their school mates (they generally all face the same direction when swimming around the reef). This co-ordination has a variety of benefits, such as in avoiding predators.

The primary goal of her research is to determine how climate change, particularly ocean acidification and rising temperatures, affect schooling fish. However, in preparing for this research, she found that little background research had been done on schooling behavior in the unique environment of coral reef systems (as opposed to temperate and freshwater systems). Therefore, in addition to her climate change research, she has focused on gaining an increased understanding of what school traits maximize the benefits of group-living on coral reefs. 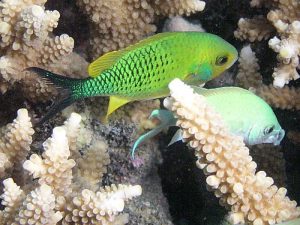 Dominique Roche, the 2012 Ian Potter Doctoral Fellow, was at the same conference in Prague and was in fact the Young Scientist Award winner. His marine science work has taken him all over the globe. Since completing his PhD at ANU in December 2013, he returned to Montreal, Canada where he worked on science policy contracts around public data archiving and data sharing. In that time, he and his wife Sandra (another LIRS researcher!) went to China to deliver two workshops on aquatic respirometry, including one at the Shanghai Ocean University.  There, they collaborated with a professor and PhD student, which led to his award winning project presented at the 2015 Society for Experimental Biology conference (investigating the effects of behaviour and aerobic capacity on physiological defense mechanism in benthic fish).

In May 2014, Dom and Sandra received post-doc funding that allowed them to move to Switzerland and join Redouan Bshary‘s lab. After moving to Europe in June 2014, he and Sandra returned to the Research Station for a two month field season. After  spending the following winter analyzing their data and skiing in Switzerland, the pair are now back at Lizard Island for two months. Their post-doc program in Redouan’s lab sees them split their time between Europe, the Swiss Mountains and Lizard Island!

Researchers and staff heading out for the day at the Lizard Island Research Station (Photo: Dr. Rebecca Johnson).

Lizard Island fellowships open a world of possibilities. Full application details can be found here. LIRRF is proud to support outstanding science on the Great Barrier Reef. If you or someone you know is involved in coral reef research, don’t hesitate to apply!