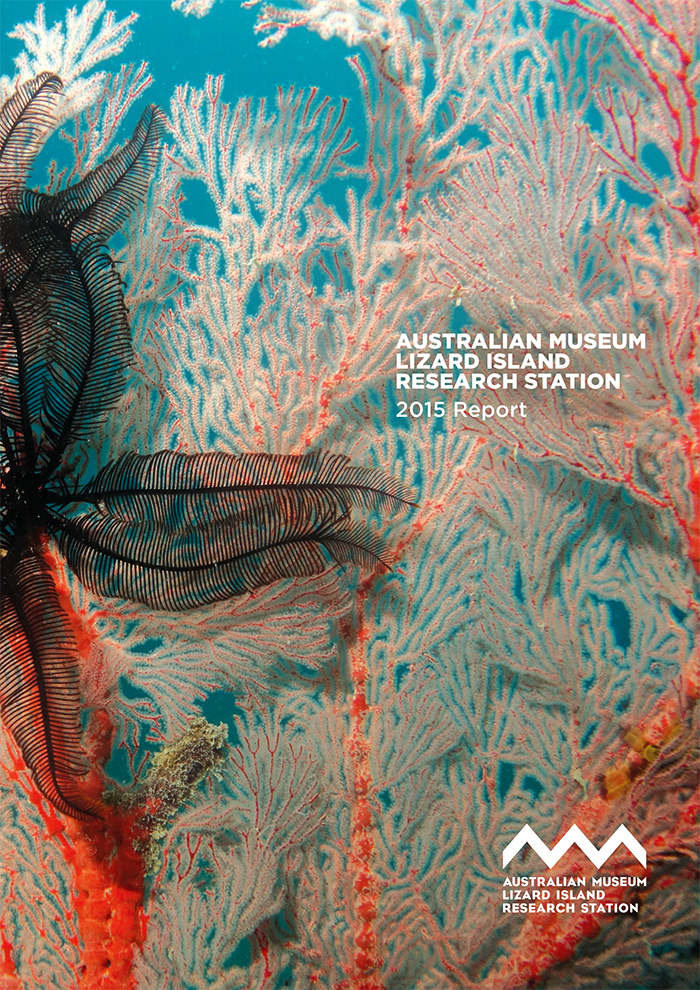 The Australian Museum’s Lizard Island Research Station has published its 2015 Report.  The cover shows a magnificent black feather star Colobometra perspinosa with a beautiful sea fan (species not identified) in the background.

Despite the disruption by Cyclone Nathan in March, the Station hosted 140 visiting scientists in 2015 – a record!  The Report provides details of their 149 research projects, including ground-breaking work on the Crown of Thorns Starfish (COTS) and the impact of climate change. It also lists the 111 scientific publications based on Lizard Island research that were added to the Station library.  Five new research Fellowships were awarded and 5 grants were made to fund work on the control of COTS.

In March 2016, unusually high sea temperatures caused a massive amount of coral to bleach and die.  The elevated temperatures were associated with a ‘perfect storm’ of factors, including global climate change, a strong El Niño and a local summer of unusually calm seas and clear skies.  See Death by bleaching.

Coral species are resilient.  If future conditions are favourable, new corals will grow and those that have not died may recover.  However, it will take decades for them to develop formations equivalent to the larger ones that have suffered death by bleaching.  If the higher sea temperatures return, our children and grandchildren may never see the full wonder of the former reef.  Research on paleo reefs indicates periods in which coral disappeared for thousands of years.

The Great Barrier Reef provides a habitat for a million or so other species. Many depend on coral for food or shelter. Large-scale coral death has cascading effects through the system. Field research at the Station is now  more important than ever as scientists track this terrible testament to the reality of climate change.  Their work will provide a knowledge base to inform future policy and conservation decisions.

The Station’s world-class research facilities and our Fellowship programs could not be maintained without the continuing support of LIRRF donors.