You are here: Home / Posts / The heart of the natural world is Sound

An update on Jamie McWilliam / Can we hear the reef dying?  Continuing his research at the Lizard Island Research Station, he has been  studying the pulse of a coral reef ecosystems in a changing climate, using underwater microphones (hydrophones) . 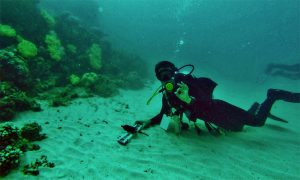 Jamie’s goal is to develop a tool for marine managers to monitor the sound  of the a reef across a range of spatial scales, with sufficient hydrophone stations to cover the whole Great Barrier Reef  ecosystem.

Jamie’s  hydrophone stations  recorded Cyclone Nathan hitting Tropical North Queensland last year.  They have also been recording the effect of the recent bleaching event on reef soundscapes…along with a mystery sound lurking around Lizard Island which can be heard on the sound bar below – possibly a whale!

Jamie’s work on ‘the signature voices of the natural world’ was inspired by his love of music (he plays  guitar) and Bernie Krause. Bernie has been recording wild soundscapes for 45 years. In the video below, listen for the sea anemone’s comment at around the 7:45 minute mark when it realises the hydrophone it just swallowed is not food – and the unforgettably sad beaver crying at the loss of its home and mate near the end.

“Sound has a profound influence on animals and people because the heart of the natural world is sound.”  – Jamie McWilliam – Lizard Island Doctoral Fellow 2016, Centre for Marine Science and Technology, Curtin University.

For further information on use of acoustics in marine science, see Marine Soundscape Ecology (PDF).  Jeff Leis, a senior scientist at the Australian Museum, has published research on the role of reef sounds in attracting fish larvae. Julius Piercy has also conducted soundscape research at Lizard Island. Listen to Julian’s recordings here. You can hear the coral reefs dying.