These little animals are only a millimetre or so in diameter, but together with countless of their close relatives they make a mighty contribution to our world.  Coral polyps build reefs, including Australia’s Great Barrier Reef. And reef are very important. Although they take up less than 1% of the ocean surface, they provide a habitat for around 25% of all marine species.

WHY ARE THEY CALLED POLYPS? Because they typically have tiny tentacles around their mouth. They are closely related to jellyfish, but because of the tentacles their name is derived from ancient Greek and Latin words for sea animals such as octopus and cuttlefish. (polupous / polypus, poly+pus,  literally many+feet).  Until the invention of sufficiently powerful microscopes,  coral polyps were thought to be plants.

ARE THERE MANY SPECIES OF CORAL POLYP?  Yes. According to the GBRMPA, around 600 different types of coral can be found in the Great Barrier Reef Marine Park.  The Lizard Island Field Guide > Marine Life > Invertebrates section lists 55 species of hard coral and 11 species of soft coral.  They take an amazing array of shapes and sizes.  See also AIMS > Coral Fact Sheets and Russell Kelley’s Coral Hub – Resources & Training for Coral Identification.

WHY IS SOME CORAL HARD AND SOME SOFT?  Because hard and soft corals are formed by different types of polyp.

HOW DO CORAL POLYPS REPRODUCE?  In two ways: sexually, famously by synchronous spawning, and asexually, by budding or division.

WHAT DO CORAL POLYPS EAT? The algae are a major food source for hard coral, mainly through photosynthesis.  Hard coral polyps draw most of their nutrients from their algae. They also eat plankton and tiny plants – the main food for soft coral polyps. See also AIMS > Coral Fact Sheets > Bleaching

WHAT EATS CORAL POLYPS?  The Crown of Thorns Starfish (COTS) is the major predator.  Overpopulation of COTS can kill an entire reef.  Parrotfish, angelfish, sea slugs, snails and worms also feed on coral, but they do not proliferate in plague numbers like COTS and are not considered detrimental to reef ecosystems.

Here are three photos of a species of hard coral called galaxea fascicularis.  The first shows a colony on a reef near Lizard Island. 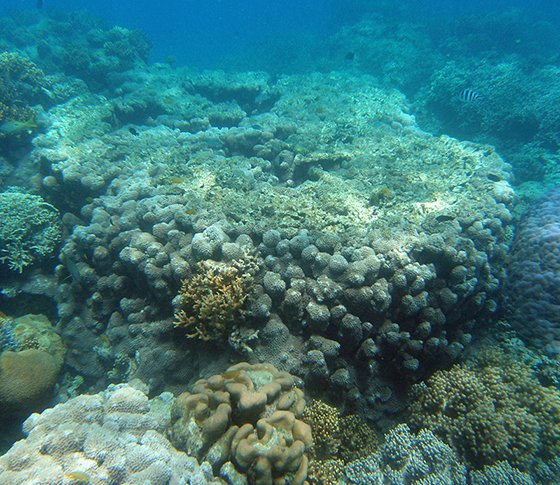 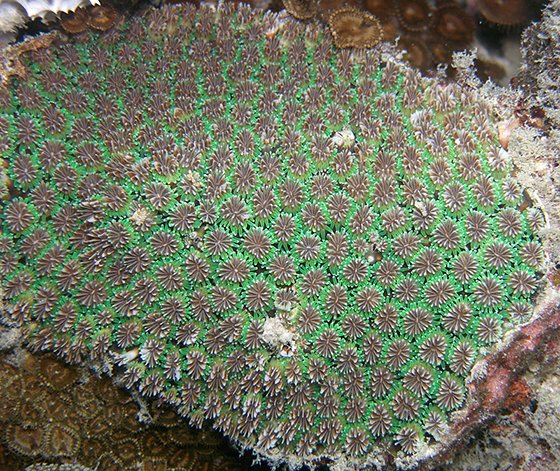 This third photo provides a macro (close-up) view.  It is easy to see why coral polyps were once thought to be plants. 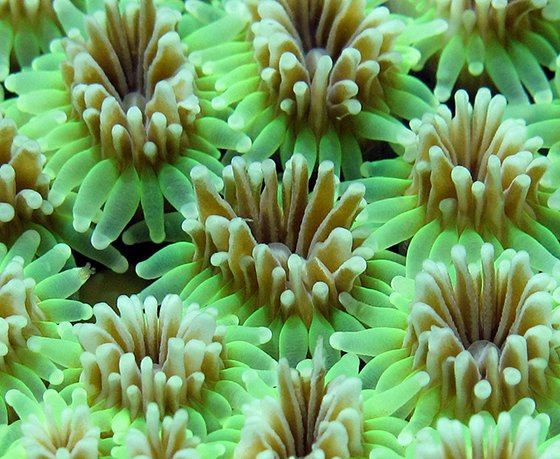