For nearly two decades, Manoela Romano de Orte has been studying the double-barreled menace of pollution and climate change that puts coral reefs in the firing line.

As a recent graduate in Brazil in 2004, Manoela was looking for a research topic for a higher degree when a tanker exploded during unloading and broke in half. Four hundred tonnes of oil spilled from the wreckage into the surrounding water, fouling seabirds and ruining the livelihoods of fishermen for miles around.

“That drew my attention and I felt a need to find out more about the spill. I had so many questions like ‘What happened to all the smaller organisms that got caught up in it?’ and ‘How long were these effects going to last?’ ” 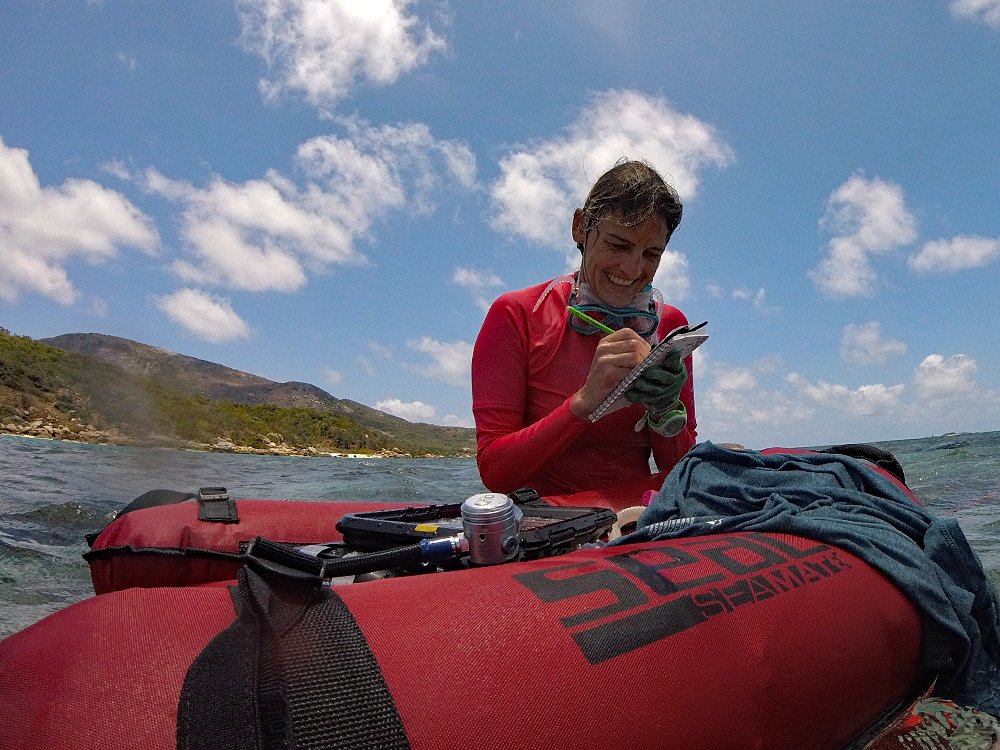 The tide of Manoela’s curiosity rose and kept her afloat for a year of intensive research into that very spill, narrowing down on the effects it had on microalgae – the plants at the base of the marine food chain. After that, she packed her bags and flew to Spain for five years’ more study to earn her PhD. “What I am trying to learn is how the different man-made threats to the ocean multiply each other.”

One poignant example she recounts concerns sea anemones and microplastics.

“You see, recently I was researching this and comparing anemones that had been bleached by global warming and ones that still had their algae symbionts. Both consumed the plastic particles, but the bleached anemones took much longer to remove the plastic from their systems. So climate change is really harmful because it can exacerbate other dangers.” And the list of those is long: rising sea levels, ocean acidification, more frequent natural disasters, heavy metal contaminants, invasive species and more . “For me, climate change is the biggest threat because it causes or contributes to all of these.” 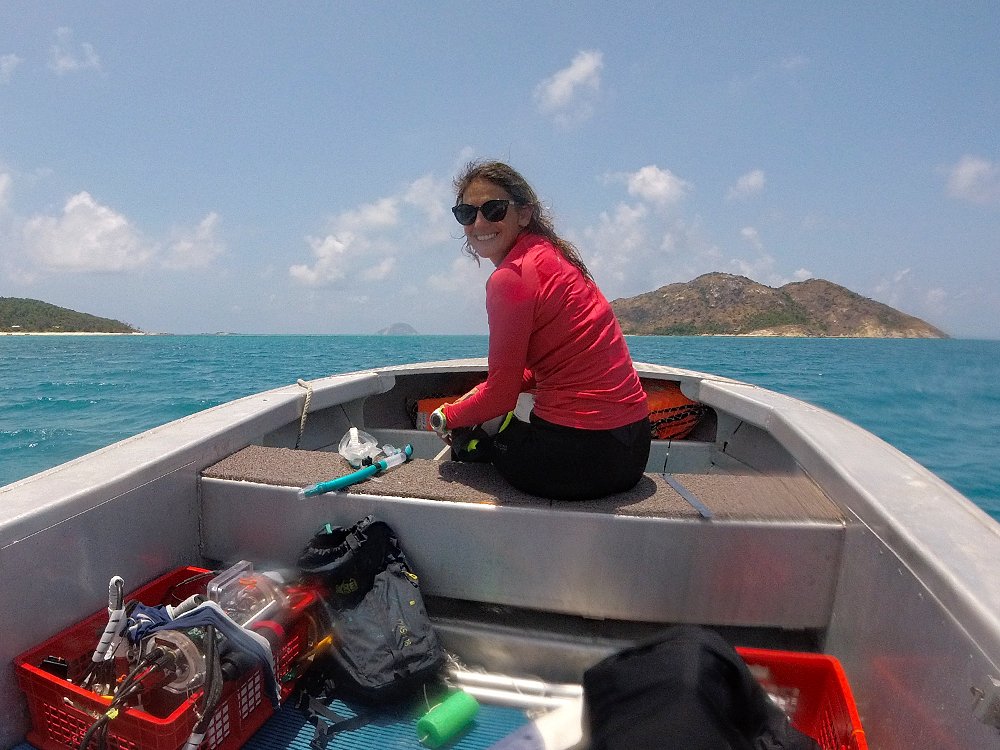 Manoela’s postdoctoral research took her to California where she works with Prof. Ken Caldeira at the Carnegie Institution for Science at Stanford. She was part of a large team that visited Lizard Island twice, in 2018 and 2019, to measure changes in reef metabolism (see Going to the LIMIT on Lizard Island: the impact of ecological disturbance on coral reef metabolism).

Based on that work, Manoela was lead author in a paper released in March this year that tells another frightening story.

“When corals die, you get communities of algae that grow over them. So we were trying to understand how they influence the metabolism of reefs around Lizard Island. Usually, scientists try to sample this by looking at seawater collected nearby. They can then study the concentrations of compounds in it to tell them the health of the corals.”

Manoela’s team, however, needed to separate the readings from living coral communities and from algae growing on dead coral nearby. So a custom-built chamber was used, taking readings for both day and ‘night.’

“We were surprised at first because the algae were calcifying at a similar rate to the corals during the day. But if you turned your lights off to mimic night-time, the corals were still calcifying whilst the algae were dissolving away the carbonate that had accumulated during the day. So when researchers go out there in the afternoon and take samples from the reef they’ll think that the corals are doing great because calcification is going on at a really fast rate. What’s actually happening is that the reading is coming from the algae as well: it’s a false signal that means corals are doing worse than we thought.” 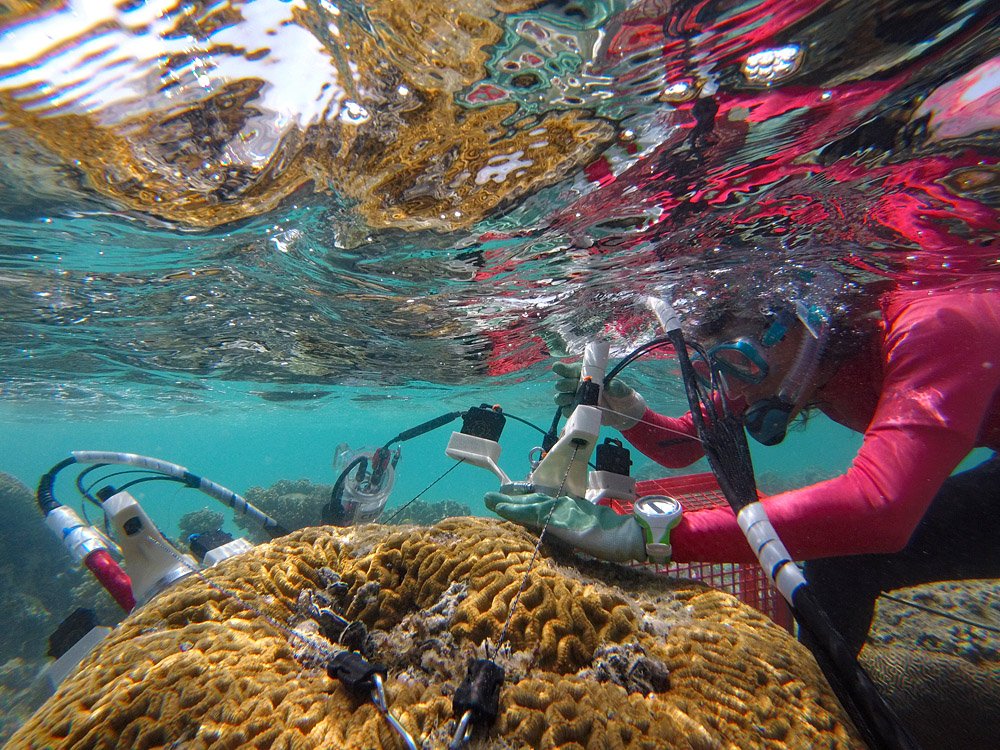 But everything isn’t all doom and gloom. In some cases, Manoela’s research has shown examples of extremely hardy corals that could help us save the reefs.

“There are corals in the mouth of the Amazon river which is murky from sand and silt blocking out the light. And recently I was doing a project with corals in tide pools that are exposed above the water’s surface for hours each day in the heat. In both cases, the corals manage to survive. Perhaps if we can find out how they do so we could help protect others which aren’t so robust.” There may be hope for corals yet.