Marine environments are under increasing threat from human activity with climate change widely recognized as the single greatest risk to coral-reef ecosystems. Globally, the rapid build-up of carbon dioxide and other greenhouse gases in the atmosphere is leading to rising sea surface temperatures and ocean acidification. The former is causing mass coral bleaching events which often results in mortality to corals while the latter reduces the ability of corals to build skeletons. Lizard Island experienced the destruction that elevated sea temperatures can cause during the 2016 and 2017 mass coral bleaching events. Reducing human-induced CO2 emissions is critical for limiting the frequency and severity of these impacts and for maintaining the health of coral reefs and other ecosystems.

It was established in 1973 and has developed into one of the world’s leading coral reef field research stations. Each year LIRS supports about 100 scientific research projects on coral reef biology and ecology.

From the 1970s to the mid-1990s electricity was provided by diesel-powered generators but only during daytime and early evening. By the mid-1990s, it was no longer feasible to turn the power off at night because it was needed to run research experiments 24 hours a day. Since then, power at LIRS has been provided continuously year-round.

Given the severe threat that coral reefs are under due to human-induced climate change, it is important for LIRS to minimize its carbon footprint. From the Station’s inception to early 2011, its primary source of CO2 emissions was from burning diesel fuel for power generation.

In order to supply greener power, in early 2011 LIRS installed a solar-diesel hybrid power system based on recommendations from several energy audits and assessments. Although the main aim was to reduce CO2 emissions, other significant benefits included a reduction in fuel costs, in the time and cost to maintain diesel generators and in the time it took staff to transport fuel purchased from the LI Resort to the Station.

The new hybrid power system was funded by the Lizard Island Reef Research Foundation (LIRRF) and commissioned in February 2011. It consisted of 144 solar panels (producing 30.2 kWp), six solar inverters, 30 kW of battery inverters and 48 x 2V gel cell batteries yielding 95 kWh of useable energy at 30% Depth of Discharge. The system was linked to existing diesel generators which would provide power when battery storage was insufficient to meet demand or during overcast conditions. The capacity of the batteries was not large enough to meet all of the Station’s power storage requirements due to the relatively high cost of battery storage a decade ago and to budget constraints. As a result, a diesel generator needs to run each night, albeit at a much-reduced level compared to earlier years. In 2014, another 36 kWp of solar panels were added in order to better charge the batteries. 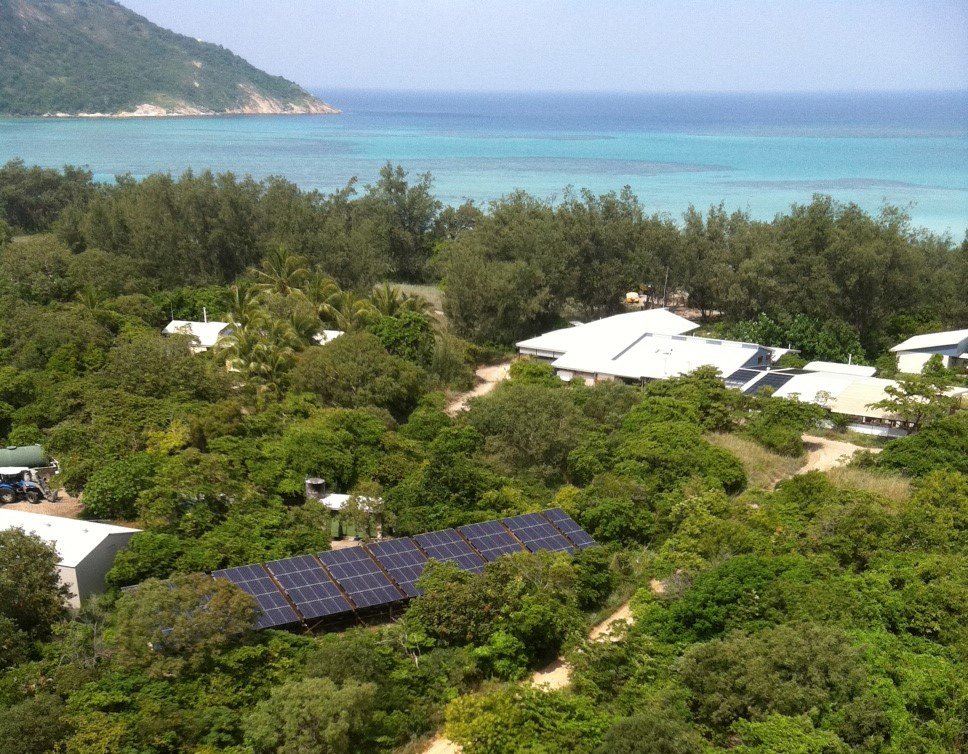 The original 144 solar panels on a purpose-built frame. 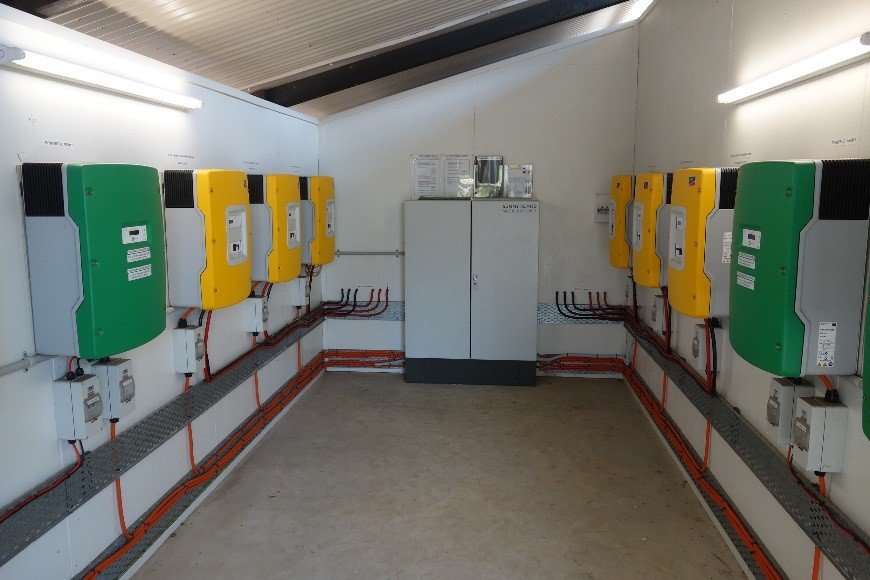 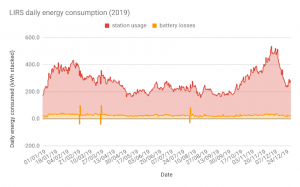 Energy consumption varies throughout the year and it is considerably higher in summer than in winter. In 2019, daily usage varied from about 190 to 500 kWh with an average of about 270 kWh (see graph below).  To date, the solar-hybrid system has provided reliable power and significantly reduced the Station’s carbon footprint. For example, the year before the solar hybrid system was installed, LIRS used 41,000 litres of diesel which produced about 108 tonnes of CO2 whereas in, in 2019, LIRS used 11,845 litres of diesel and produced 31.2 tonnes of CO2.

Since about 2017 there has been a decline in the capacity of the batteries to store power. This, coupled with an increase in demand for power by researchers, meant that the percentage of electricity derived from solar was 66% in 2019. Somewhat ironically, much of the increase in demand for power was due to an upsurge in aquarium-based climate change projects. These projects require heating large volumes of seawater, a power-hungry exercise, in order to simulate projected sea temperatures of the future.

Over the past few years, power usage at LIRS been has analysed and modeled to determine the parameters that will ensure a high level of reliable green power into the future. The following improvements are expected to achieve about 95% of the Station’s electrical power requirements:

In 2019, the LIRRF began seeking donations for upgrading the power system. This initiative led to substantial donations from the Charles Warman Foundation and the Minderoo Foundation.

Tender bids for the project were issued in June 2020 and a contract to supply and install an upgraded power system was signed with Tropical Energy Solutions (Townsville) in October 2020. Installation of this system is planned for early 2021.

In brief, the upgraded system will consist of: 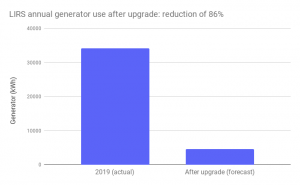 Modeling of the new system predicts LIRS will produce about 95% of its electricity from solar power. Generator usage (in kWh) after the upgrade will drop by about 86% (see graph below) and generators should only be required for a few hours on each of about 60 days a year. Diesel usage after the upgrade is modeled to be about 2,400 L per annum which produces 6.3 tonnes of CO2. In comparison, prior to the installation of any solar power, LIRS was using about 41,000 L of diesel annually.

The upgraded system will provide LIRS with a very high level of green power for at least the next ten years. CO2 emissions will be 94% lower than 2010 levels, prior to the switch to solar.

LIRS sincerely thanks the Charles Warman Foundation, the Minderoo Foundation, and the LIRRF for their tremendous support of this important project. It also thanks Robert Thomas and Jay Banyer for technical advice and Jay for modeling.