As on land, the damage to the coral reefs was very patchy; some places were stripped bare while some others have remained largely intact.  At each site, we surveyed two depths (8-10m and 3-5m); recording the entire fish and coral community, including species, abundance and, for the fishes, total length.  See also coral diversity. 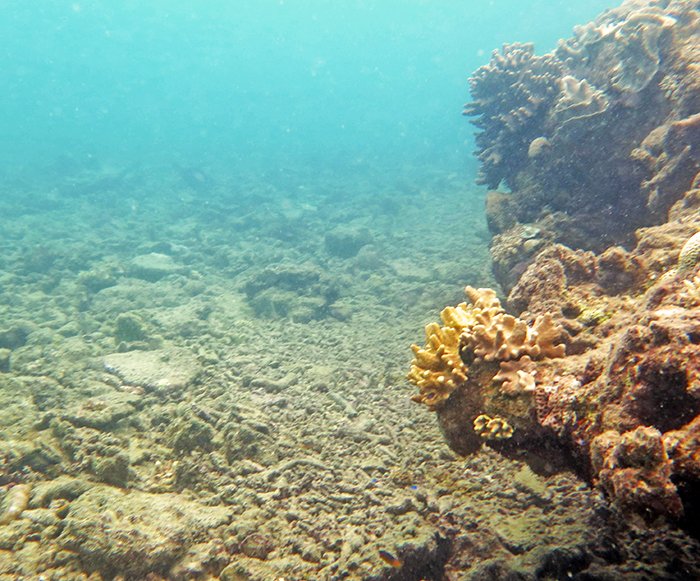 Despite coral mortality and slopes of rubble, some of the structure remains complex enough to serve as good fish habitat. © Daniela Ceccarelli 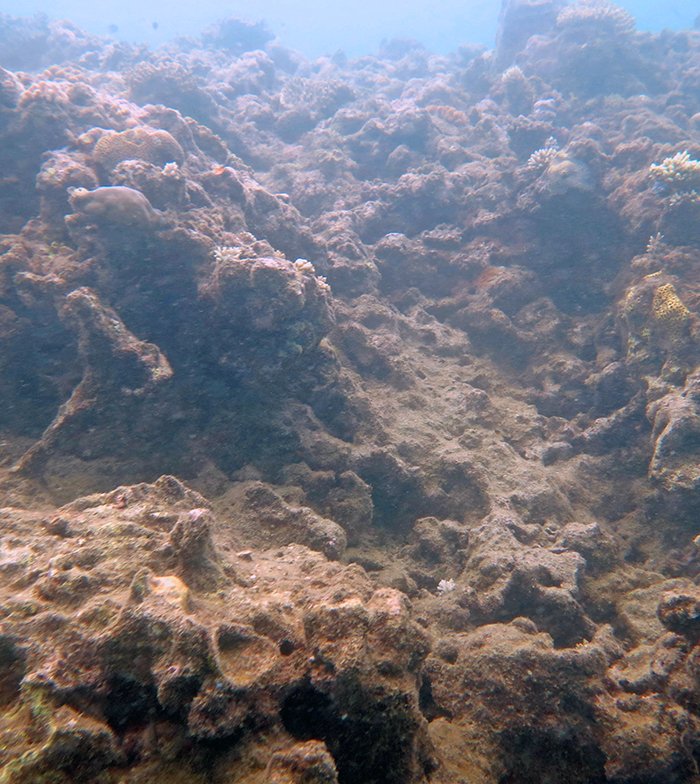 Habitat destruction #2: Despite coral mortality and slopes of rubble, some of the structure remains complex enough to serve as good fish habitat. © Daniela Ceccarelli

At first glance (and having scanned only part of the data), the fish community appeared not to have suffered extensively from the cyclone, or perhaps it recovered quickly.  Overall fish numbers were similar to, or higher than, those we counted in 2011, and species richness was reduced at only a few sites.  In places with widespread coral loss, there were visibly less coral-associated fishes such as the corallivorous butterflyfishes, and damselfishes that rely on live coral for shelter.  Corals of the genus Acropora, which provide valuable habitat to many fish species, suffered disproportionately from the cyclone damage.  See coral diversity.

However, even in the most devastated patches, there were clouds of newly settled babies; a promising injection of new recruits to the population. 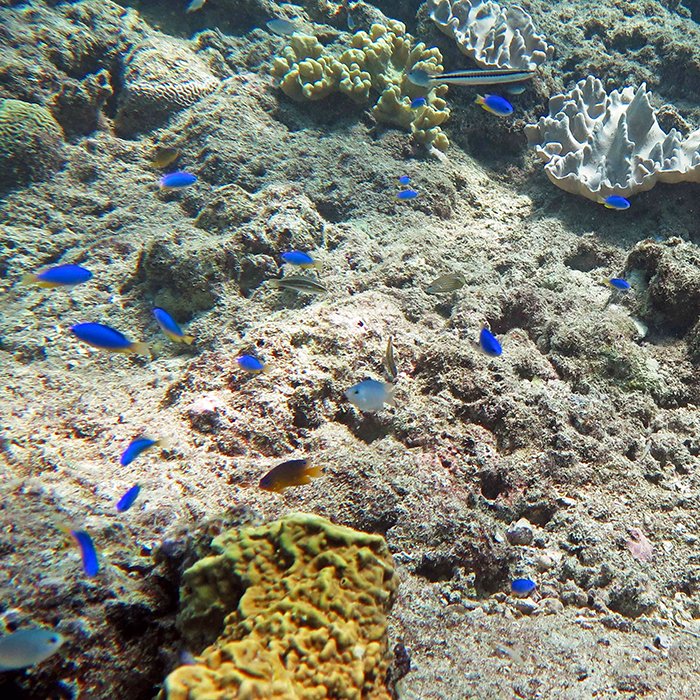 Most sites are covered in a blanket of newly settled and juvenile fish, promising a good start to the next cohort of reef fish. © Daniela Ceccarelli

The patchiness of the damage meant that even among the rubble we found clams and anemones that had somehow been spared. 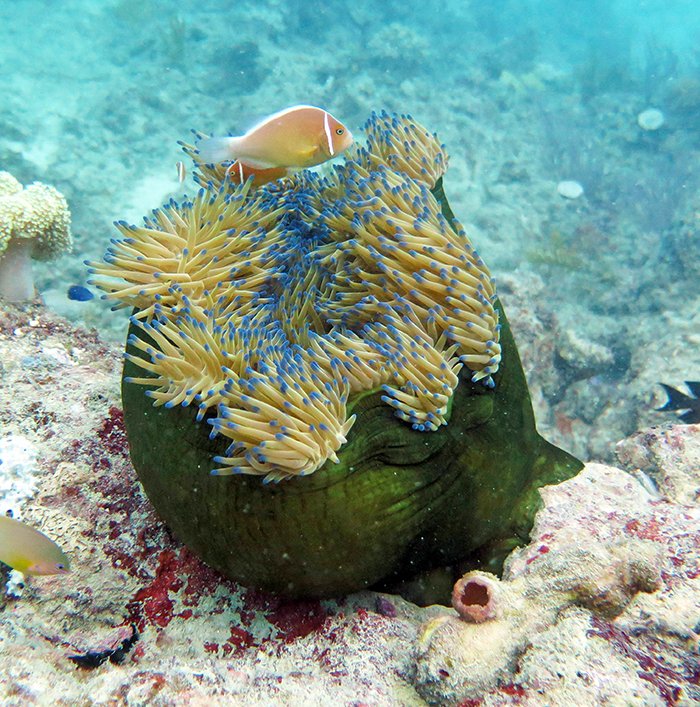 In many places, the reef maintained its underlying complex structure despite the coral mortality.

Numbers of large predators seemed lower in some places, possibly because of a temporary loss of prey.  Coral trout, one of the key predators on these reefs, also like to shelter under large table corals, which all but disappeared from most sites.  Without having yet analysed the data, most of the coral trout I recorded were quite small (around 40cm). 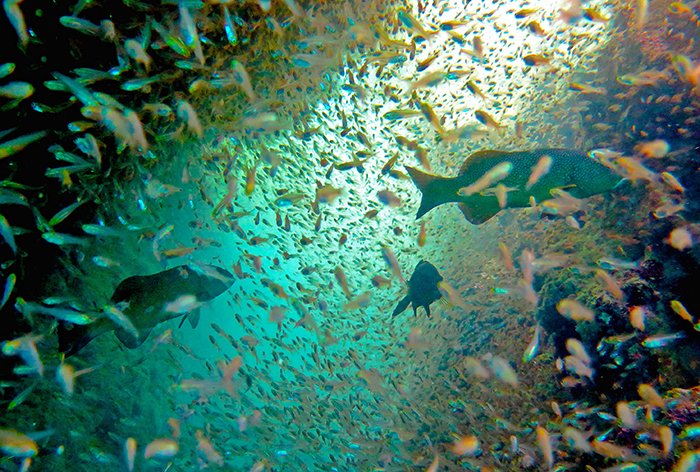 Coral trout in a cave with a cloud of juvenile cardinalfish. © Daniela Ceccarelli

I spotted only two sharks.  It wasn’t clear whether this was a decline all around the island, or just a matter of spatial variability.

Many sites retained large and active populations of grazing fishes such as parrotfishes, surgeonfishes and rabbitfishes, roaming across the reef surface in big mixed schools.  At one site we came across a school of Bolbometapon – bumphead parrotfish that lumber across the reefscape like a herd of buffalo. 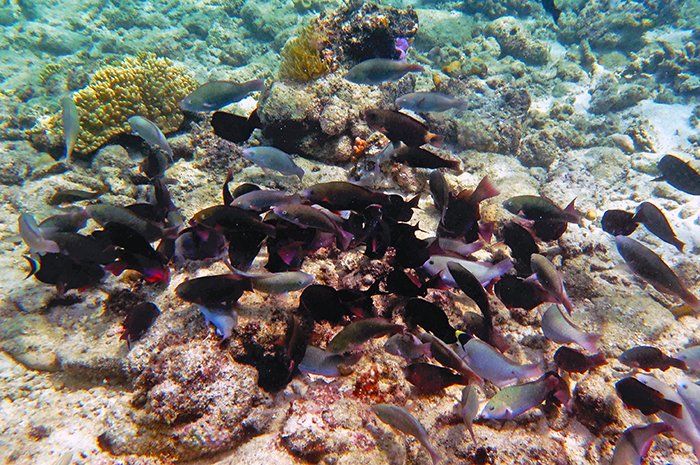 The grazing activity will most likely keep algal biomass low and give the newly settled corals a chance to establish themselves as the reef recovers.