How can small reef predators be stopped from hunting baby fish?  With FEAR!  Fear of predation triggered by the presence of a larger predator can stop smaller predators from foraging on baby fish.

This post was contributed by Maria Palacios, recipient of the 2015 Ian Potter Doctoral Fellowship – Ed

Small predators (mesopredators) are an important functional group in coral reefs; they are abundant, voracious and highly active. However, due to overfishing of larger predatory fish (their direct predator) mesopredators can threaten the balance of the ecosystem. Disproportionate increases in mesopredator abundance and activity may lead to a depletion of smaller fish (prey).

Interested in the indirect effects (fear/risk) by which mesopredators can be controlled by top-predators, our team  (me, Donny our loyal assistant, and Mark, the keen professor) embarked on a three-month field trip to the Australian Museum’s Lizard Island Research Station, on the northern Great Barrier Reef. 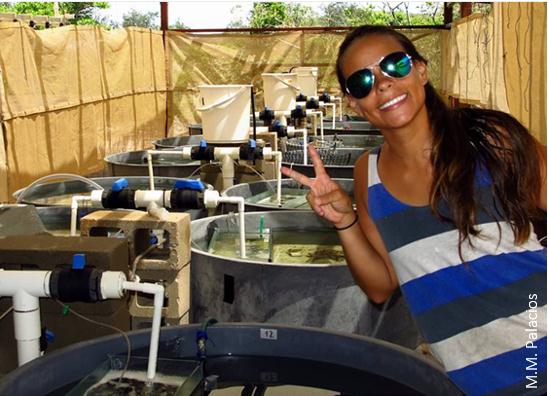 Here we ran a mesocosm experiment (bringing a small part of the natural world under controlled conditions). We used a 3-level food-web of reef fish (baby damsels / dottybacks / coral trout) to establish how fear, elicited by top-predator cues (chemical and visual stimuli of coral trout), affected mesopredator (dottyback) behaviour and modified their interaction with prey (baby damsels). After playing around with 5 experimental treatments, 50 trials, 300 baby damsels, 50 dottybacks, 4 coral trouts, 2,000 minutes of video recordings and 5 behavioural measures, we were able to unravel that:

What does all this mean?  It shows that indirect top-down control by a top-predator can cascade through the food-web to modify lower level predator-prey interactions. Most importantly, it also shows that large predators are key in the behavioural control of small predators and the prevention of over-exploitation of baby fish!

Our research described a fear-mediated process for the first time among 3 trophic-levels of reef fishes,  highlighting the importance of behavioural interaction in marine food-webs.  Understanding behavioral predator-prey interaction will help to better predict the consequences of top-predator loss.  It will also inform management policies for coral reefs and help improve the efficiency of fisheries.

See our published research paper:  Sensory cues of a top-predator indirectly control a reef fish mesopredator;  and  our behind-the-scenes video: