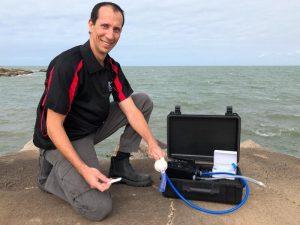 Mitigating the devastating effects of coral eating Crown of Thorns Starfish (Acanthaster cf. solaris, aka CoTS) has been the focus of 21 LIRS based projects over the past 5 years.  This extensive and collective research has been funded by the generous $500,000 grants program donated by The Ian Potter Foundation 50th Anniversary Commemorative Grant in 2014.  Identifying outbreaks early enough to better manage their spread across coral reefs remains a huge challenge for scientists worldwide however the development and deployment of eDNA technology is making good inroads.

We’ve previously written about the work of AIMS based researchers Jason Doyle and Dr Sven Uthicke whose work has been supported by this grant.  Jason and Sven have been one of the groups to spend time at LIRS since its recent re-opening, collecting seawater samples from around Lizard to analyse for COTS DNA that has been shed into the water. This is known as environmental DNA, or eDNA.

Lizard Island is currently between COTS outbreaks – the last one ended in 2015 – and it’s rare to see an animal. The first we knew of previous outbreaks was when adult starfish emerged from the reef in large numbers. Next time, we’re hoping that regular monitoring using eDNA and other techniques will detect the hidden build-up of the population before it emerges to prey on corals. If we know where the population is building up, we can better target resources to control the incipient outbreak before it does much harm.

Jason and Sven take eDNA samples in winter to monitor for adult COTS hiding within the reef. The eDNA signal can’t possibly be confused by COTS larvae at that time because larvae are only present in the water following the summer spawning season. Last winter’s sampling proved the eDNA technique to be effective in detecting the presence of adult COTS when they’re in very low numbers. It will be interesting to see how the numbers compare when this year’s samples have been analysed. 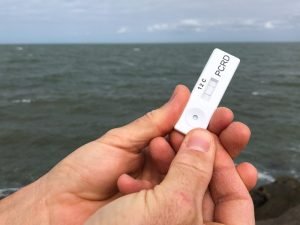 The researchers have developed a dipstick test that uses the same technology as home pregnancy tests to detect CoTS.  Collaborators over many years, Jason and Sven have adapted an off-the-shelf dipstick using a technology called Lateral Flow Assay (LFA) to detect DNA in marine environments.  Lateral flow tests are widely used in medical diagnostics for home and point of care testing as well as laboratory use.  Findings from this research, published in Environmental DNA, builds on prior work undertaken at AIMS developing laboratory-based DNA-detection techniques to find COTS more effectively and at pre-outbreak levels.  Most importantly, this methodology is sufficiently sensitive to detect populations of CoTS in water samples taken from low (=nonoutbreak) population densities.

“It’s the sort of technology we would love to get out to as many people as possible, because the more people that are doing this kind of test, the more information we have about the location of CoTS and the better management outcomes we can achieve,” Jason said.

“Organisms leave a genetic shadow wherever they go, so we use the genetic shadow of CoTS in seawater to flag the presence of both adults and babies.  But if this technique was really going to be an early warning system, we needed to bring our validated tools for environmental DNA (eDNA) detection out of the lab and into the hands of non-lab people in the field.” 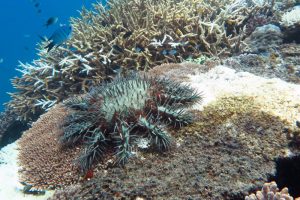 This is a very promising advance as more traditional ways of detecting CoTS outbreaks involves costly survey work.   Jason points out that this method of testing is not an alternative to survey methods but potentially is more cost effective.  “We see it as a way to raise the red flag so we know there’s probably a good reason to get people in the water in this spot, but not that spot over there, maximising the use of resources such as divers, boats and other infrastructure,” he said.

As well as The Ian Potter Foundation this research has been supported by the National Geographic Society.

Based on the media release by AIMS