To anybody familiar with the coral reef systems of the Great Barrier Reef and their inhabitants, the importance of the damselfish family is well understood. Take a quick look at the reef while snorkelling on Lizard Island and you will see hundreds of this family’s individuals, each belonging to a species with its own particular lifestyle. There are over 388 described species of damselfishes in the world, most of which are found on shallow coral reefs. They display a high variation of colourations, habitats, and ecologies – some of which are unique and fascinating, as in the popular anemonefishes. 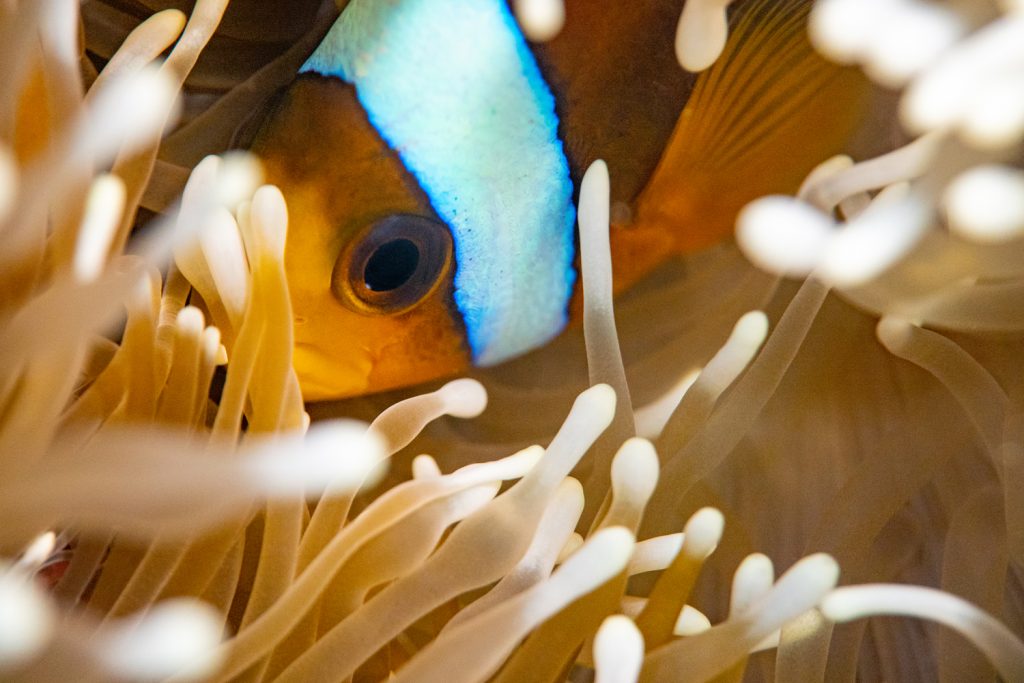 In recent years, researchers of the Queensland Brain Institute in Brisbane have discovered that the habitat and ecology of damselfishes can shape their vision and how they perceive the world. Their colouration, their feeding habits, and the depth at which they are found can influence the gene expression in their eyes, more specifically in the retina where photoreceptors (light sensitive cells) are found. Moreover, some damselfish species have been found to have a ‘secret’ communication channel, which is invisible to humans and to predatory fish: ultraviolet (UV) colour patterns. These patterns reflect UV light, which has shorter wavelengths than what we (humans) call visible light. The sensitivity to UV light in damselfishes is due to specific proteins found in their photoreceptors, which are not found in humans. The Ambon Damsel, Pomacentrus amboinensis, uses UV facial patterns for territorial interactions, and for species and individual recognition.  Behavioural studies have demonstrated that this species can distinguish conspecifics (belonging to the same species) from heterospecifics (individuals belonging to a different species). 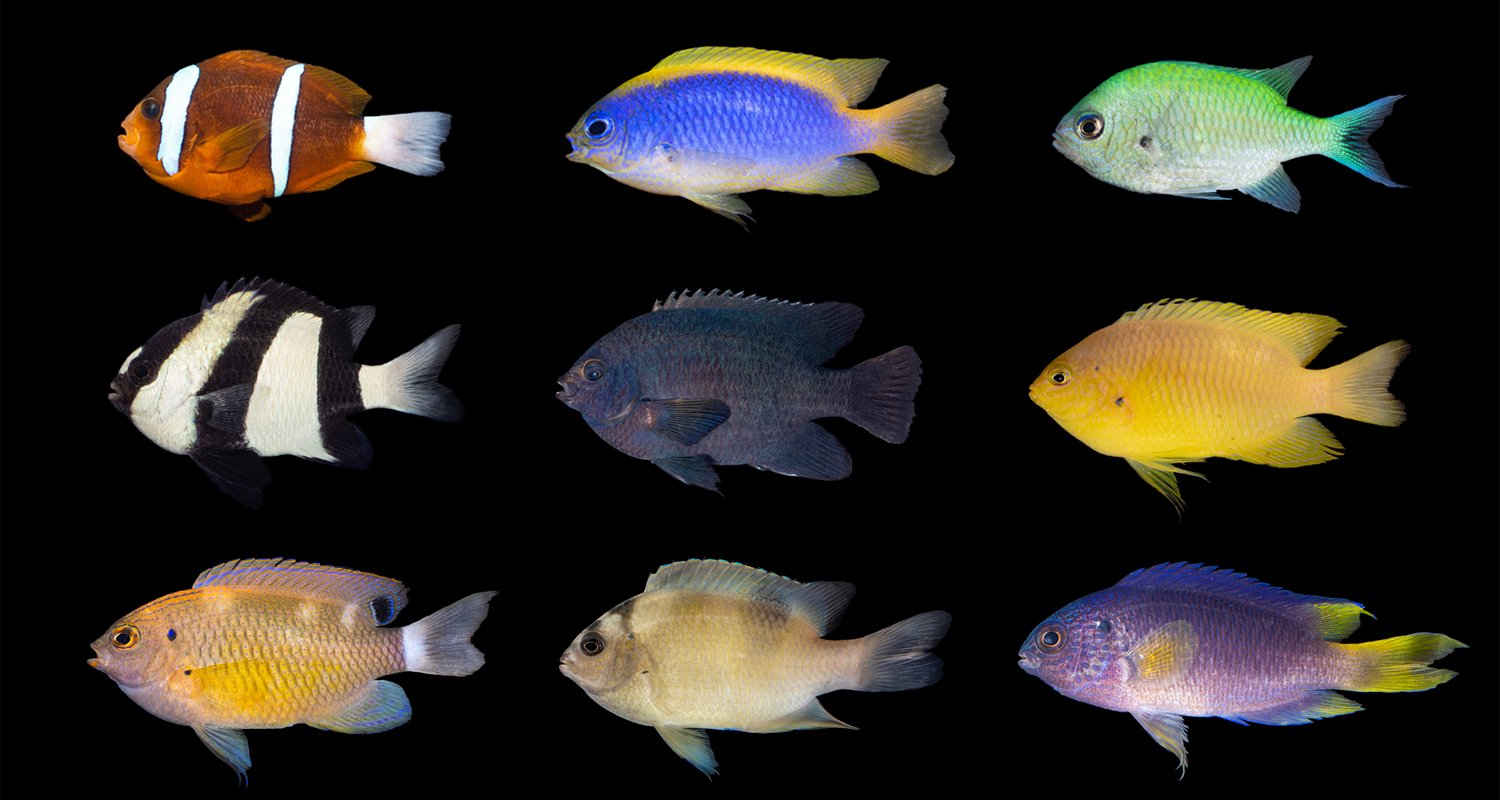 I am currently researching how development, colouration and ecology shape the visual system in damselfishes. These fishes display a high variety of colourations in-between different species and they sometimes change colouration as they grow. As well, I will investigate the extent of UV colour patterns in the damselfish family, similar to the ones found in the Ambon Damsel, and their occurrence at different life stages. Lizard Island is the main base for my field work. 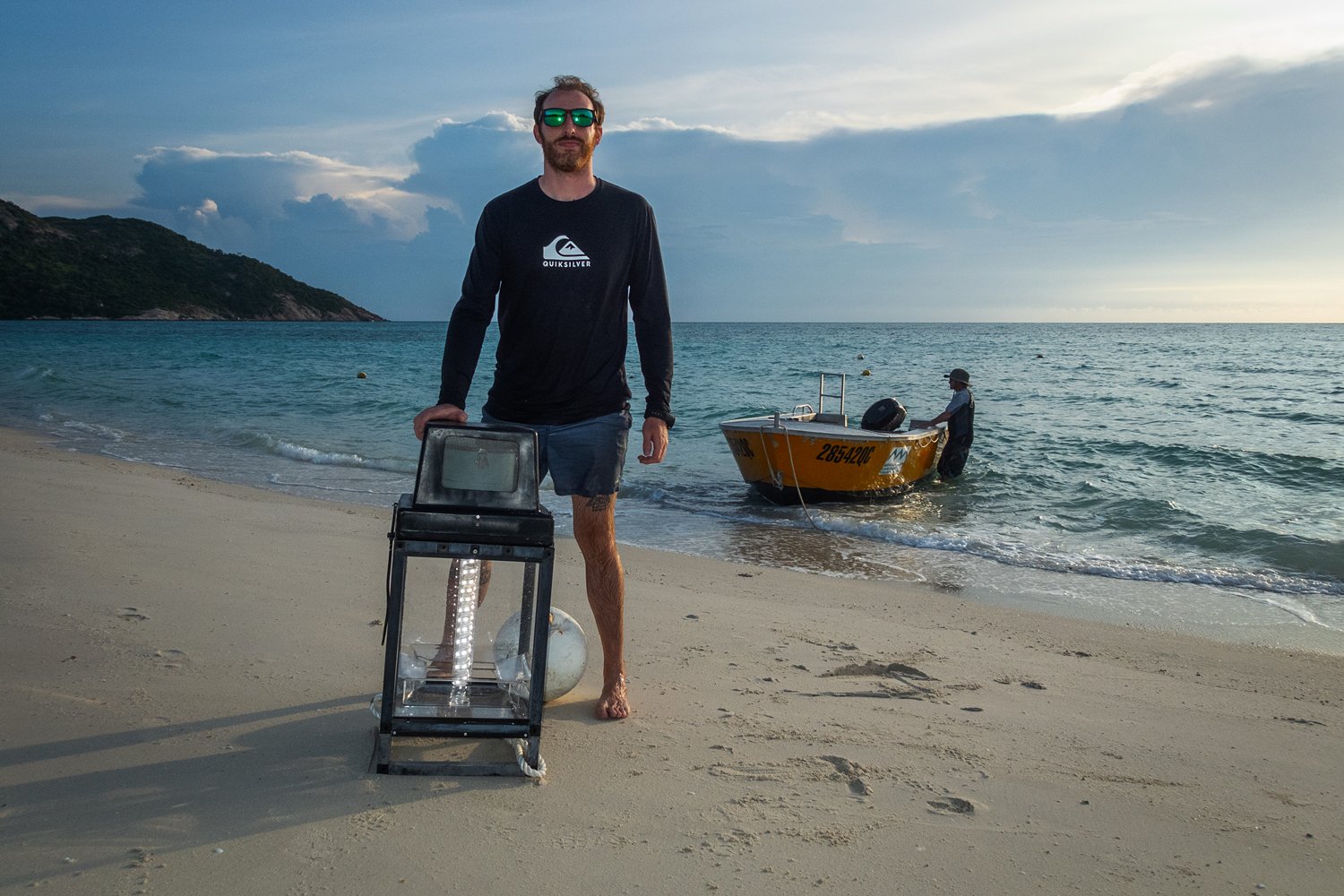 Valerio at Lizard Island ready to deploy light traps which are used to capture larval fish returning from the open sea to the reef to settle. Photo: Justin Marshall.

Damselfishes play an important role on coral reefs, serving both as bottom feeders that keep corals free from algal overgrowth and parasitic infestation, and as important food sources for many larger fishes. Understanding how developmental changes in morphology and ecology can influence their visual system is of interest for future management purposes, especially with recent declines in coral reef health worldwide. 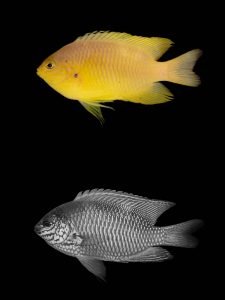 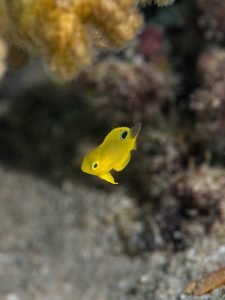 A juvenile Ambon Damsel recognisable by the ‘eye-spot’ on the dorsal fin which is lost with age. Photo: Valerio Tettamanti.