Even though the crown of thorns starfish (COTS) has been the subject of many scientific studies, we still have huge knowledge gaps. Professor Morgan Pratchett* highlights things we know about COTS and areas where more research is urgently required.

We know COTS have an enormous reproductive capacity – a single female can produce up to 60 million eggs in a single season. This is what they look like: 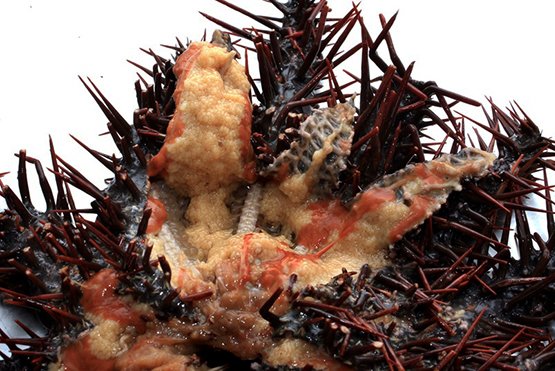 We know the COTS population follows a boom and bust pattern, exploding to plague proportions every 15 years or so and then dying off until it is hard to find any on the reef.  We know their appetite for coral is so voracious that they can turn an entire reef area into white lifeless skeletons within weeks. 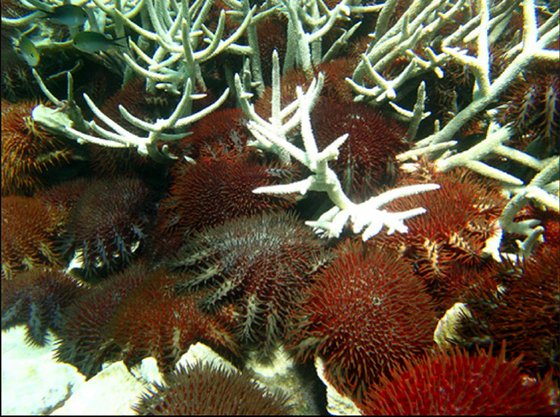 COTS are responsible for about 42% of all coral loss on the reef.  We also know COTS can survive for several months without eating at all. 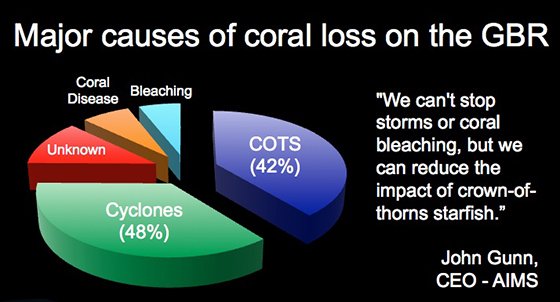 COTS are responsible for 42% of coral loss on the GBR. Slide credit: Morgan Pratchett

COTS have few natural predators, and are fatally allergic to injections of oxbile protein. The ability to cull COTS using a single-shot injection of oxbile was discovered at Lizard Island.  It provides a ray of hope for controlling future outbreaks.

COTS outbreaks are more amenable to management compared to the other major causes of acute coral loss (cyclones and rising sea temperatures which cause ‘bleaching’). See AIMS.  Unfortunately, culling COTS with oxbile injections is only a short-term local solution.  It can can be used to protect small areas of reef, but more research is needed to understand the triggers for population outbreaks of COTS and how to constrain them before they reach plague proportions.

One possible explanation for the exploding COTS population may be the occasional occurrence of nutrient-rich water originating from agricultural runoff, facilitating a much higher survival rate for those countless millions of potential babies.  However, this does not explain why population explosions begin in the northern part of the Great Barrier Reef, in areas that are relatively untouched by land runoff, or why outbreaks also occur in remote island locations such as Chagos in the central Indian Ocean where there is no agriculture or human presence.

Another possible explanation may be over-fishing of natural predators on COTS.  However, most of the known predatory species appear naturally scarce; there is no discernible reduction in COTS population densities in areas where fishing is totally prohibited, and puffer fish (Arothron hispidus), the one COTS-eating species that is reasonably common, are not taken by either commercial or recreational fishing.

We need to test the possibility that anthropomorphic factors such as agriculture and fishing may be of only relatively minor importance, and that COTS populations simply have an unusual natural boom and bust dynamic.  We need to understand the factors that trigger the changes of cycle.  And given that more than half of the coral on the Barrier Reef has been lost in living memory (See De’ath et al 2012, PNAS) and that COTS have been present on the reef for millennia, we need to understand how it was ever able to become the world’s largest and most biodiverse natural wonder.

The immediate areas of focus for COTS research are spawning behaviour, settlement preferences, mortality rates (predation), adult movement and sensory abilities.  The immediate priorities for COTS management are development of more effective methods for population control and culling; detailed monitoring to ensure early detection of the next population outbreak; and improved understanding of COTS biology, both for outbreak and non-outbreak populations.

* NOTE:  Professor Morgan Pratchett is a Professorial Research Fellow at the ARC Centre of Excellence for Coral Reef Studies at James Cook University.  This post is based on a presentation Professor Pratchett made as guest speaker at our annual dinner at the Australian Museum on 20 August 2014.

Further funds are required for additional research and to help contain the current COTS population outbreak.  Help scientists save the reef from the ravages of COTS by making a donation.  Donations of $2 or more are tax-deductible in Australia.