Behavioural interactions in the fish food-web 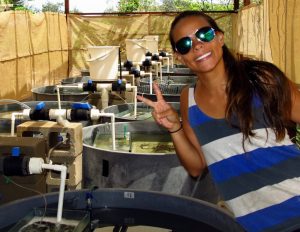 Colombian born Maria Del Mar Palacios moved to Australia in 2013 to begin her PhD at JCU under the supervision of Professor Mark McCormick. Having finished all her field-work on ‘Mesopredator behaviour’ at the Australian Museum’s Lizard Island Research Station, she is now writing her thesis from Melbourne.

Maria’s research is titled ‘Controlling Mesopredators: importance of intraguild behavioural interactions in trophic cascades’.  Maria’s project originated from the fact that populations of large predators have been overfished and decimated from oceans worldwide. With the loss of predation force (top down control) this has triggered trophic cascades and phase shifts due to the explosion of small predators (mesopredators) that deplete resource prey species.

Through Maria’s use of a reef fish food-web she experimentally addresses how the effect of mesopredators on their resource prey (baby fish) can be modified by the fear response to top-predators and by interspecific interactions with other mesopredators. 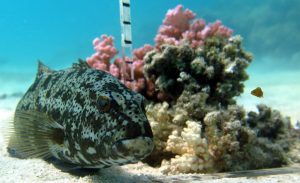 Additionally, Maria shared some of the limitations of running this type of experiments. She said ‘behavioural studies can be quite subjective and complicated to conduct as they rely on the moody personality of all species involved. Many times, fish just don’t want to play with you’. Despite the complexity of the trials, Maria’s research has shown that all species in the reef food-web, no matter how far apart, are interconnected in a delicate balance. For example, her results suggest that loss of top-predators could cascade to increase stress levels of baby fish by more than 30%.

Maria finished our interview by shedding some inspiration with a quote to ‘Never give up, remember to get involved in research as much as you can, because getting experience is the key for success!’

To see more information on Maria Del Mar Palacios and her work visit:
Her website and her Coral Centre of Excellence page.