Science teacher Edward Sze-Tu visited the Lizard Island Research Station with a group of school students, where he made an exciting discovery.  This is his story:

We were learning about classifications.  I thought it would be a great opportunity for the students to understand the contributions ordinary citizens can make to marine research.

We had just finished lunch on the beach at Mermaid Cove. I was snorkelling with another teacher, Mitch Thompson, observing the battering that the corals received from Cyclone Ita. A Blacktip Reef Shark about 1.2m long swam up to me before gliding away. I felt blessed.

We then proceeded to the shallows.  I observed a strange cream coloured shape walking on the sand. It was a species I had never seen before. It had a cape resembling Batman, which when unfolded resembled a butterfly. For a moment I could not figure out whether it was crawling or swimming. I shouted to the students on the beach and yelled for someone to throw me their camera. Cassidy Ainsworth-Grace was the first to respond.  She lent me her camera and I took some shots and a short video.

At the BBQ that night I spoke to Station Directors Anne Hoggett and Lyle Vail about the sighting. They thought it was possibly a gurnard of some sort.  When they saw the photos they realised there were no previous reported sightings of that species at Lizard Island.  They identified it as the Purple Flying Gurnard, a.k.a. Helmet Gurnard and uploaded the photos to the Lizard Island Field Guide. 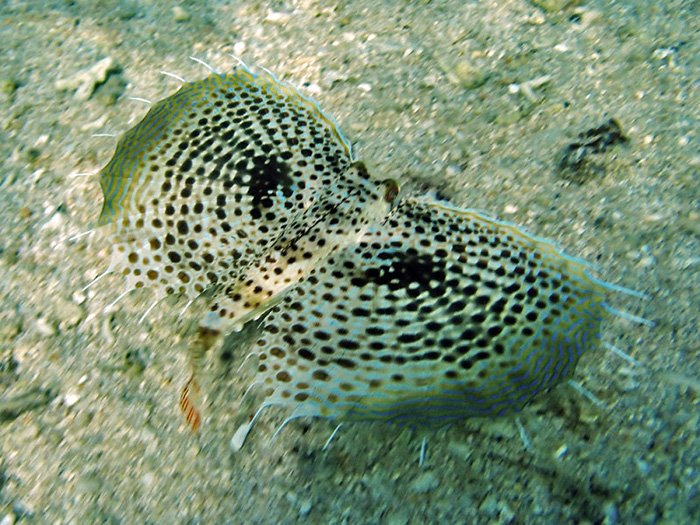