The changing song of the sea 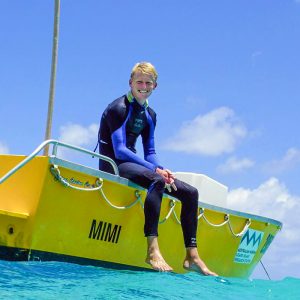 For the last four years, I’ve been fortunate to carry out research on coral reef bioacoustics at Lizard Island. My most recent trip was funded by a LIRRF Ian Potter Doctoral Fellowship,  awarded by the Australian Museum.

Coral reefs are alive with sound; the crackle of snapping shrimp combines with the pops, grunts, whoops and growls of fish to create a rich biological soundscape. But in my first season at Lizard Island, we made the heart-breaking discovery that climate change is silencing this symphony.

By repeating acoustic recordings that we had taken on reefs in the lagoon and in front of the Research Station before Cyclones Ita and Nathan and the 2016 mass bleaching event, we demonstrated major changes to natural reef sound caused by degradation. Further, in field experiments using those recordings, we showed that the sound of degraded reefs is less attractive to young fishes than healthy reef sound; reductions in fish settlement caused by these acoustic changes might threaten the recovery potential of degraded coral reefs. We published our findings in this PNAS paper and in this summary video:

We realised this new knowledge might have applications for coral reef restoration. Around the world, projects seek to restore degraded reefs by replanting corals, but often it takes a while for fish to recolonise these habitats. In our work at Lizard Island, we showed that underwater loudspeakers broadcasting healthy reef sound can significantly accelerate the rate at which young fish colonise degraded habitat, leading to twice the abundance after a period of six weeks.  See our published paper in  Nature Communications and this summary video:

In my most recent work at Lizard Island I ran further experiments investigating the attraction of young fish to reef sound. In one study, I used 3m-long ‘choice tunnels’, playing reef sound of different types and qualities from one end of the tunnel to see how often it would elicit a positive response from a fish placed in the middle of the tunnel. In another, I used loudspeakers to make patches of degraded habitat sound more attractive while manipulating the structural complexity and availability of the habitat. 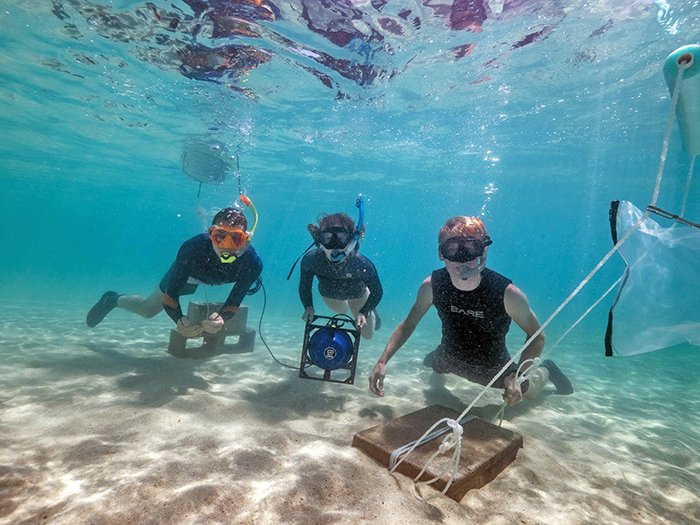 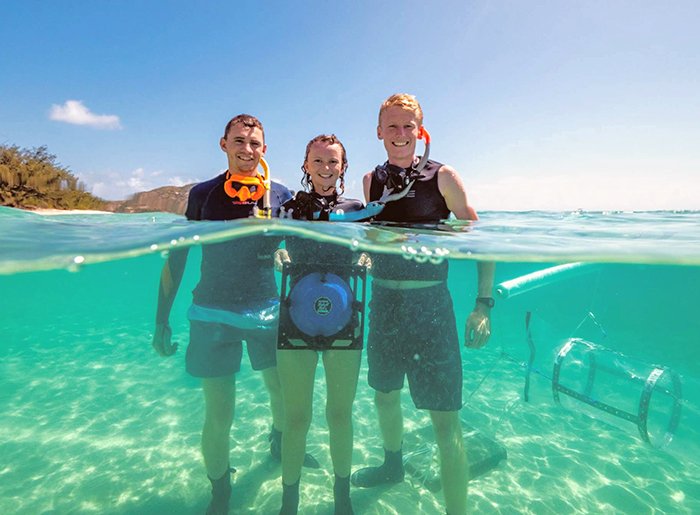 Our work at Lizard Island has taught us more about how young fishes choose a place to live, and how we might use that knowledge to help reef restoration efforts around the world.

As well as advancing my skills in field research, the Ian Potter Doctoral Fellowship has given me opportunities to communicate the wonders of the ocean and the urgent necessity of global action to protect its biodiversity and stabilise the world’s climate. I have addressed many audiences on that theme, ranging from primary schools to prime ministers. My work at Lizard Island was the core of my presentation that won FameLab 2019, the world’s biggest science communication competition.

It also informed my keynote address at the Economist’s 2018 World Ocean Summit, where I spoke to economic and political leaders about the impacts of climate change on the world’s marine ecosystems.

For all of these opportunities in academic research and environmental advocacy, I am immensely grateful to the Ian Potter Foundation, LIRRF and the staff at the Australian Museum’s Lizard Island Research Station. They have helped me to develop as a junior environmental biologist, and I look forward to continuing this work in years to come.