Can we save the Reef?

Bleaching events killed many reef-building corals in the late summers of 2016 and 2017 .  Given enough time (i.e. a decade or two without further bleaching), these corals will re-establish. Millions of tiny new corals have already appeared during the cooler months, but the prospects for bleaching-free decades over the remainder of this century are not good.  Can we save the Reef?

Climate science tells us bleaching temperatures are associated with a buildup of greenhouse gases in the atmosphere, mainly caused by human use of fossil fuels, and that they will recur unless there is global action to reverse that buildup.  Given its unlikely such action will be taken in time and on a sufficient scale to avoid further bleaching, can we save the Reef?

Emma Johnston is a professor of marine ecology at UNSW and a director of the GBRMPA.  She addressed this question in a recent Catalyst documentary, providing a brilliantly clear exposition of the biology of bleaching and science that could help corals become more heat-tolerant.  See it here on ABC iView.  (57 minutes, totally worth the time investment!) 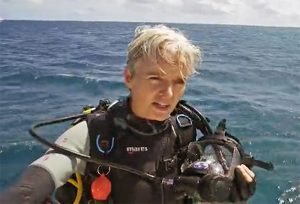 Professor Emma Johnston on ABC Catalyst – Can We  Save The Reef?

Professor Johnston concludes that science will NOT save the Reef as it is today or restore it to how it was 30 years ago. However, she says science CAN accelerate the development of a few heat-tolerant “super corals” to maintain a different protective reef, providing a still-useful but less-diverse habitat for other species.

Over the last 12,000 years, humans have converted wilderness to productive farming and have hugely improved the efficiency of food production by selective breeding of plants and animals.  Most of this change has occurred since 1800. The human population then was around one billion.  Today it is approaching 7.6 billion.

Should we undertake similar modification of marine life?  There are good reasons to be cautious.  They include not wanting to interfere with marine wilderness, concerns about unintended consequences of propagating super corals, and the extremely challenging logistics and economics of “marine farming” on the scale of the Reef. Professor Terry Hughes points out that no-one has ever successfully restored a reef, even at the scale of a kilometre, never mind 800km.

Dr. Ruth Gates is a Research Professor and Director of the Hawaii Institute of Marine Biology.  She is studying how corals can be “conditioned” by exposure to heat stress and pairing with more heat-tolerant symbiotic algae. 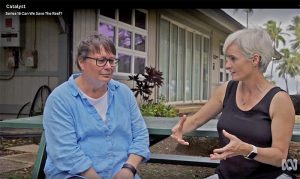 Dr Ruth Gates with Emma Johnston on ABC Catalyst – Can We Save The Reef?

Madeleine van Oppen is a professor of marine biology at the University of Melbourne.  She is also a senior principal research scientist leading the ‘assisted evolution’ of corals at AIMS.  Her work on creating more heat-resilient hybrid corals is featured in the Catalyst documentary, on her websites: microbial-symbiosis and coral assisted evolution, and in the 8 April 2018 issue of Cosmos.   Ruth and Madeleine agree with Emma Johnston’s conclusion that we should proceed down this path, because reversing the greenhouse gas buildup within the next few decades is not a realistic option and the consequences of doing nothing outweigh the risks. 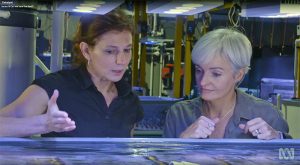 Professor Madeleine van Oppen with Emma Johnston on ABC Catalyst – Can We Save The Reef?

Jody Webster is an associate professor in the School of Geosciences at the University of Sydney.  Jody and his team study sediment cores and other data sources to understand the effects of past sea level and climate changes.  Their research shows that corals near Lizard Island and elsewhere have died off and reappeared on several occasions over geological time.  This is of little comfort for those of who want to preserve the Reef for their children and grandchildren, because periods of hiatus can last thousands of years.  See Paleo reefs. 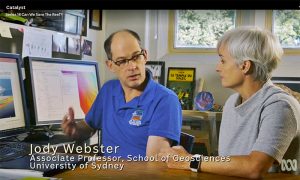 Associate Professor Jody Webster with Emma Johnstone on ABC Catalyst – Can We Save the Reef?

Emma Johnston and Jody Webster will provide a briefing on this topic for LIRRF Members & Friends at the Australian Museum in Sydney on the evening of Tuesday 10 April.  Madeleine van Oppen will provide a similar briefing in Melbourne on the evening of Wednesday 11 April.  At each of these events Dr Anne Hoggett AM will provide an update on the Australian Museum’s Lizard Island Research Station and its continuing importance on a climate-changed Reef.  (See Research on a lesser Reef)