Reef research: the brain and other benefits

Why does the Queensland Brain Institute do field research on coral reefs at Lizard Island?

It’s because marine animals provide rich insight into the evolution and biological functions of brains (all life evolved from the sea); coral reefs host 25% of all marine species; the Great Barrier Reef is the largest and most important reef ecosystem; and the LI Research Station provides excellent facilities and support for research on the Reef.

Professor Justin Marshall’s Sensory Neurobiology Group (one of 37 research groups at the QBI) is focussed on visual neuroscience and visual ecology.  It aims at understanding how animals perceive, communicate and interact; what they can see that we miss; and how their brains and sensory systems are shaped by their environment and behavioural needs.**

The Marshall Group also engages in the bio-engineering and development of underwater and lab-based tools, including polarisation cameras, rigs to determine the spectral sensitivity of eyes, and devices that mimic the “vibration-sensitive lateral line” – a key sensory organism in many marine animals.  See also Marine research helps human vision and Mantis shrimps inspire medical imaging sensors

Mantis shrimp Odontodactylus scyllarus at Lizard Island © Ray Caldwell.  Mantis shrimps (stomatopods) see polarised light and a colour spectrum beyond our human range; have satellite eyes which move independently; along with a uniquely efficient way of processing colour data. This one has a punch faster than a rifle bullet, with a very impressive power-to-weight ratio. It can crack open crabs and shellfish with ease. 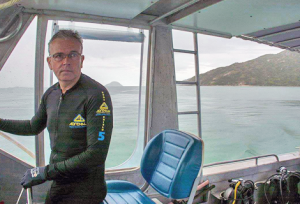 Justin Marshall and other scientists in his Group have been conducting field research projects at Lizard Island over the past 30 years. Many of the publications in their extensive list are based at least partly on this work.

Biological sciences now explore at the level of single cells, molecules, atoms and electrons.  Laws of molecular physics and chemistry apply in all brains.  Studies of marine life (especially cephalopods – octopuses, cuttlefish & squid) have advanced knowledge of how neurons work; and how “the brain” can be distributed through entire nervous systems, involving a vast complexity of electrical and chemical (protein) communication and memory.  Sensory neurobiology has never been richer in interest or potential, closing in on the mysteries of memory, consciousness and will.

Scientists have discovered many thousands of new chemical compounds, molecular structures and biological processes through their research on reef plants and animals.  This research is inspiring tissue engineering (based on alginates and sponge scaffolds) and  new medicines to relieve pain,  treat cancer, arthritis, bacterial infections, Alzheimer’s disease, heart disease and other human ailments (see NOAA).

Stationary species such as corals and sponges have evolved a complex array of chemicals to combat predators, defend their chosen space against encroachment by other organisms, recycle calcium, attract symbionts and repel parasites. Sponges yield insight into ‘self’ versus ‘non-self’ recognition. They deploy molecules similar to those involved in the immune system in mammals and have made an important contribution to our understanding of such systems. See Why are sponges so toxic and Google.

An extensive archive of medical discoveries inspired by marine life is available at Marine Drugs – a journal of the U.S.Government’s NCBI

Although some marine research discoveries do have commercial potential, most originate from science driven by our curiosity to learn about life, our desire to conserve it and our sense of wonder.  Such science can only be sustained through universities and dedicated not-for-profit research institutions, all of which are dependent on philanthropic support.  See Why donate.

Buttonbelly Nautilus macromphalus specimen from the Lizard Island area in the Australian Museum’s collection © Lexie Gersbeck and Gabi Howarth. Our sense of wonder is engaged by the elegance of its shape.  The curve is a logarithmic spiral, graphed by drawing circular arcs connecting the opposite corners of sequential squares, with the side of each successive square being equal to the sum of the sides of the previous two squares. This sequence was first identified by the mathematician Fibonacci (1170-1250). It begins 0, 1, 1, 2, 3, 5, 8 13, 2, 34, 55, 89…. and also describes spiral galaxies.

Much coral has already been lost due to abnormally high sea temperatures. Devastating further loss is likely under climate change projections.  See IPCC SR1.5 Ch3 (PDF), NCA4 Ch9 and Justin Marshall’s Coral Watch.  There are still countless coral reef species yet to be described and studied scientifically, much more investigation to be done on those we already know, and a great urgency to do it while they are still available.  If we lose our living coral reefs, we and our descendants will be lose much more than just interesting places to visit and important habitats for fish.