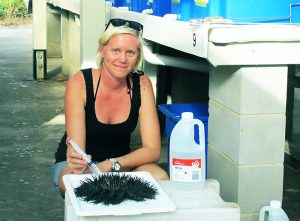 COTS is a global issue Massive population outbreaks of the coral-eating crown-of-thorns starfish (Acanthaster spp. referred to as COTS) destroy reef after reef as they spread.  The current outbreak on the Great Barrier Reef is the fourth recorded since the 1960’s.  COTS outbreaks also threaten coral reefs throughout the Indian and Pacific Oceans. The impact has been […]